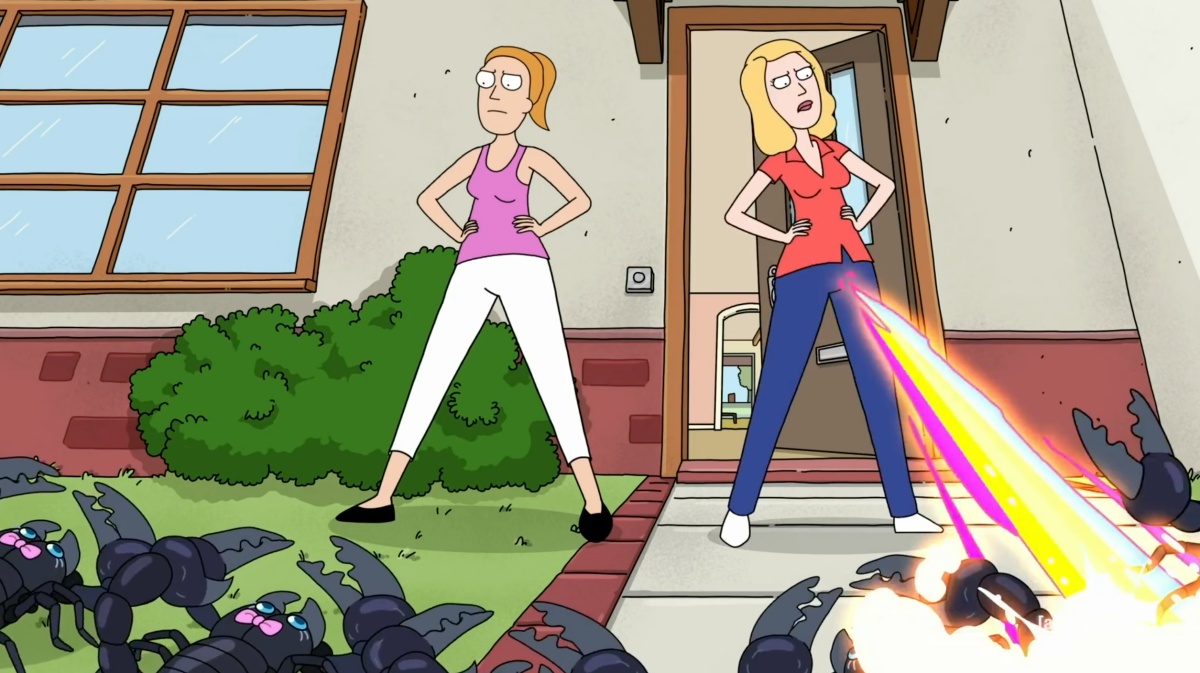 Rick and Morty returned last night in a weird but visually entertaining episode about the titular duo being stuck on a train that is a literal story train anthology, made up of narrative devices that have deadly consequences.

When the episode first begins, you think it’s just going to be an anthology episode, with all the passengers on the train sharing stories about why they want to kill Rick, why they’ve dated Rick, or how Rick saved Christmas. It quickly reveals itself to be an even more metatextual adventure, with the baddie being named Story Lord who ends the episode in an AU dimension explaining the history of Christianity to Jesus. (Yup, that happens).

“It’s not a train, it’s a story device,” Rick explains. “Literally. A literal literary device quite literally metaphorically containing us.”

Watching the episode, I could very easily see the intent behind it. Rick and Morty is a program that lends itself to this kind of storytelling, and hearing Rick explain that some storyline is “canon” or “not canon” is funny when you consider the internet culture of any fandom. Yet, it doesn’t make for a consistently engaging episode.

Yes, some of the story gags are fun, like Rick explaining the Bechdel-Wallace Test to Morty and prompting him to tell a story about women and struggling, quickly turning to their periods, and their periods being able to produce pretty lasers as they attack female scorpions who are codified by pink bows. It’s fine, and it makes fun of itself and the way a very simple test for determining surface-level female agency can still be out of the grasp of some male storytellers.

“I’ve loved you ever since you were mailed to me by a doctor … woman.” Wow, what are they teaching you in school, Morty? Still, it doesn’t make the whole episode satisfying, because it just seems like a series of moments that are trying to make fun of the potential of the show, but also state that the potential isn’t infinite. Cool, but I’d rather we just have fun dynamic episodes, where, you know, Summer and Beth actually do things in the same episode, rather than spending time addressing the audience because someone saw the Reddit board.

I don’t think this is a bad episode, not in the least. I just feel like the pressure Rick and Morty both has and puts on itself can sometimes make it seem as if they have to address too much. I’m hoping that by breaking free of the story train (which is, funnily enough, Dan Harmon’s story circle) it means that the writers are going to break free of the confines of their own feelings of narrative limitations, and we can look forward to more Rick and Morty that challenges the story.