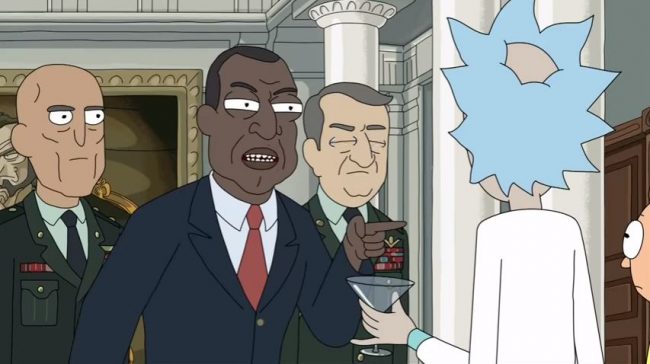 The Recap: Rick and Morty, tired of being at the President’s beck and call, blow off their world-saving assignment in favor of playing Minecraft. This begins an escalating feud with the scorned world leader; meanwhile, Beth worries that she might actually be a clone the real Beth left behind.

Well. That sure was the last new Rick & Morty episode we’ll be getting for at least a year. While the episode is entertaining as a stand-alone adventure (particularly the escalation), it leaves a lot to be desired as punctuation on what might be the show’s overall strongest season. While it briefly addresses Beth’s decision from last episode and restores the status quo by bringing Jerry back into the fold, it’s only tangentially connected to the themes that’ve been brewing throughout the season.

Yes, Rick chooses to stay with this family out of all the infinite universes, and yes, the joking conceit of the episode is that Rick is entirely too broken and OP to face any kind of consequence unless he chooses to, but pointing those elements out isn’t the same as resolving them. I’m not asking the episode to spell out a thesis on what everyone has learned this season; hell, I’m not even asking it to bring back one of its dangling plot threads (though having Phoenix Person AND Candidate Morty reintroduced and then forgotten in one season feels like a bit much). But it would be nice if the cliffhanger was related to some manner of unknown plot intrigue rather than “has anything this season’s been critically exploring sunk in at all.”

Aside from Beth’s distress, everything in this episode feels out of place with how the characters have progressed this season: Jerry doesn’t seem to have demonstrably improved, at least not in a way he’s required to prove to Beth; Morty is on astonishingly good terms with Rick; Summer is totally sidelined again; and so on. Rick’s loss of status in the family is a logical outcome of the Smith family’s increasing disenchantment with his bullshit, but it’s undercut by tying that development around Jerry and Jerry’s continuing crushing mediocrity.

It’s depressing beyond measure that the question of Rick’s intelligence versus the benefits of normalcy here resolves itself into a binary of Rick’s dickish entitlement versus giving in to Jerry’s Nice Guy nonsense—all without much of any indication that Jerry’s successfully changed since his outing with Morty and Summer. His reunion with Beth rings hollow, and I’m not sure it’s meant to be as unsettling as it comes across. Insufferable, yes; the final speech got that across. But unlike previous episodes laying out that Beth and Jerry are basically the embodiment of a Mountain Goats song, I think we’re actually meant to root for them getting back together, and it simply doesn’t work.

Speaking of that speech—I mentioned before in talking about this season that the show’s meta moments tend to be its weakest. The majority of them tend to be on-the-nose in a way that’s almost screamingly smug, making sure the audience knows how clever the script is even if it’s at the expense of the characters’ emotional truth (coincidentally, Harmon is the main writing credit on this episode).

Some of these moments do work—Rick’s speech about being the untouchable Dr. Who of the universe feels like an earned character beat—but closing not just the episode but the season with Beth laying out how things will be “like season one” is nothing more than the script patting itself on the back, technically delivering consequences for Rick while simultaneously maneuvering us back into a position of emotional agreement with him over the obvious falseness of the final tableau.

It doesn’t undo the good work of the previous nine episodes—Morty’s resentment and burgeoning tendency toward vengeance offer unique opportunities for future contrast against Candidate Morty, a rejected Rick changes any future dynamic with Phoenix Person, Beth’s genius outside of her connection to Rick is ripe for exploring, and Summer’s ascendant status as a deadpan voice of reason is a godsend. The sting is also soothed in that it wouldn’t be unlike this show to unwrite the last five minutes with the first five of season four, but it’s a disappointing anticlimax to sit with while the fanbase sinks back into the same hibernating state the Venture Bros. fandom perfected a decade ago. Here’s to a long wait of theorizing; if this is the overall strength of the show during its first season of adjusting to new writers, I can’t wait to see how much more improved season four will be.

Vrai Kaiser is a queer author and pop culture blogger; they’re not ready for another two year break. You can read more essays and find out about their fiction at Fashionable Tinfoil Accessories, listen to them podcasting on Soundcloud, support their work via Patreon or PayPal, or remind them of the existence of Tweets.