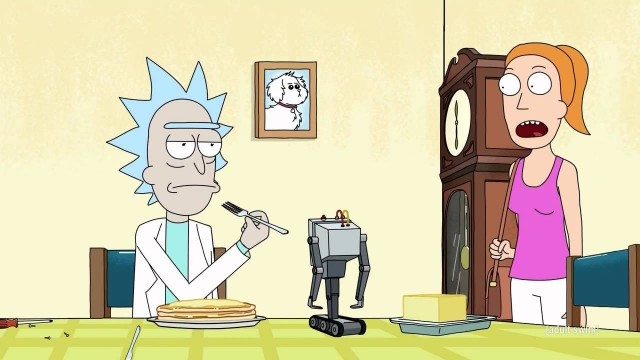 Did you know that Rick & Morty has no women writers on staff? Co-creators Dan Harmon and Justin Roiland mentioned that fact in a Hollywood Reporter interview today, along with their intention to hire more women next season. They’re not hiring more women because they set out to do so, or anything. By their own admission, several spec scripts by women just so happened to end up in their pile of favorites for season three, whereas in previous hiring rounds, the writers’ room just so happened to end up all-male.

Here’s how Roiland put it:

It hasn’t been an agenda thing, but just coincidentally for some reason — I don’t know why — this staffing round going into season three, we got a lot of female scripts in addition to male scripts. We just look at what’s the best scripts — I think in the running, we have five or six girls. It’s weird — that’s never happened before.

Harmon then referred to a previous interview in which THR had asked them about their lack of women writers:

I remember when the piece ran, I got tweeted by nine or 10 young gentlemen who were lambasting me for not taking the issue seriously — not a single female writer tweeted me and said, “You shouldn’t have joked about that — you should have apologized to America and promised to hire a woman.” I like to think maybe that article ran and a bunch of great female comedy writers sat down and wrote specs or called their agents and said, “Put my hat in this ring.” [But] the day there is a female writer in that writers room, that person is definitely not going to be thinking that they’re a quota writer.

Anyone who makes the cut and joins the team has definitely done so on their own merits. We’ve gone from having zero spec scripts [in the running from female] candidates, to having five or six of them, so it’s looking very likely that season three will have one, potentially two gals in the room.

The two men then went on to make some boring jokes about how the writers’ room would “smell better” if women were there, while also lamp-shading that these were bad jokes (so, why bother? we know you two can do better, we watch your show). Over the course of making one such joke, Dan Harmon mentioned that his previous TV show, Community, had “had a self-imposed and imposed mandate, to do a perfectly balanced writers room gender-wise — which you can accomplish with network TV with a budget that size, visibility that high.” All of this apparently led to the room smelling better! Also, Community was good. That, too.

Anyway, Harmon seems to be saying that Rick & Morty‘s third season might have a higher diversity of spec scripts due to the newfound visibility and popularity of the show. So, it’s a numbers game — the more people send in spec scripts, the more likely it is that some of them will be penned by women, even though women represent a minority of comedy TV writers overall. This, in theory, explains the “coincidental” hiring of all men in the first two seasons; fewer people knew about the show, so fewer people applied, leading to fewer women in the initial hiring pool.

I’m extrapolating a lot, here — neither Roiland nor Harmon actually said any of that. I don’t know for sure whether there were more scripts sent in overall this time, or if these men just coincidentally chose more women’s scripts. How are the scripts chosen, exactly? Because it really doesn’t sound like Roiland or Harmon have the actual numbers, nor does it sound like they much care; they seem okay with leaving all of this up to “coincidence.” And perhaps that’s because of the “budget” comment Harmon makes; maybe he doesn’t think they’re paid enough to care. In which case, my condolences. For real. Because I would love to see their bosses devote some time and money to this exact problem.

I am curious, though — does their current hiring process resemble, say, the “blind auditions” that orchestras have begun to use when seeking new musicians (which has increased the hiring of female musicians by 30-55%)? Because that might help. And also, might there be other ways to encourage more women’s scripts to end up in the initial consideration pile? Would reaching out to specific women in comedy, or perhaps women-led writing groups, help diversify the pool of candidates?

People tend to hang out with other people who look and act like them, and unfortunately, that tends to go for networking and hiring as well. So, if you want to hire for diversity, you need to figure out where people unlike yourself hang out, and send your hiring notices to their organizations, websites, and spaces. Relying upon “coincidence” won’t be enough to achieve any level of parity, whether it’s with gender or any other intersection of oppression. (I’m going to go wildly out on a limb here and assume this writers’ room is not super diverse in other areas, either.)

Lastly, as for those comments about “merit” and “quotas” and “mandates” … how about if, instead of using those words, we all just accept that there already are a hell of a lot of talented writers who happen to also be marginalized people? Those supposed “quotas” are there to make shows better, more well-rounded, and more interesting (and for all the slick, money-minded managers out there, hiring diversely is also more profitable).

Do people need a “mandate” from on high in order to admit that maybe their final product would turn out better if a more diverse group of people created it? And even when they have that mandate, are they going to make unfunny jokes about it for years afterward, while not thinking about the problem very hard?