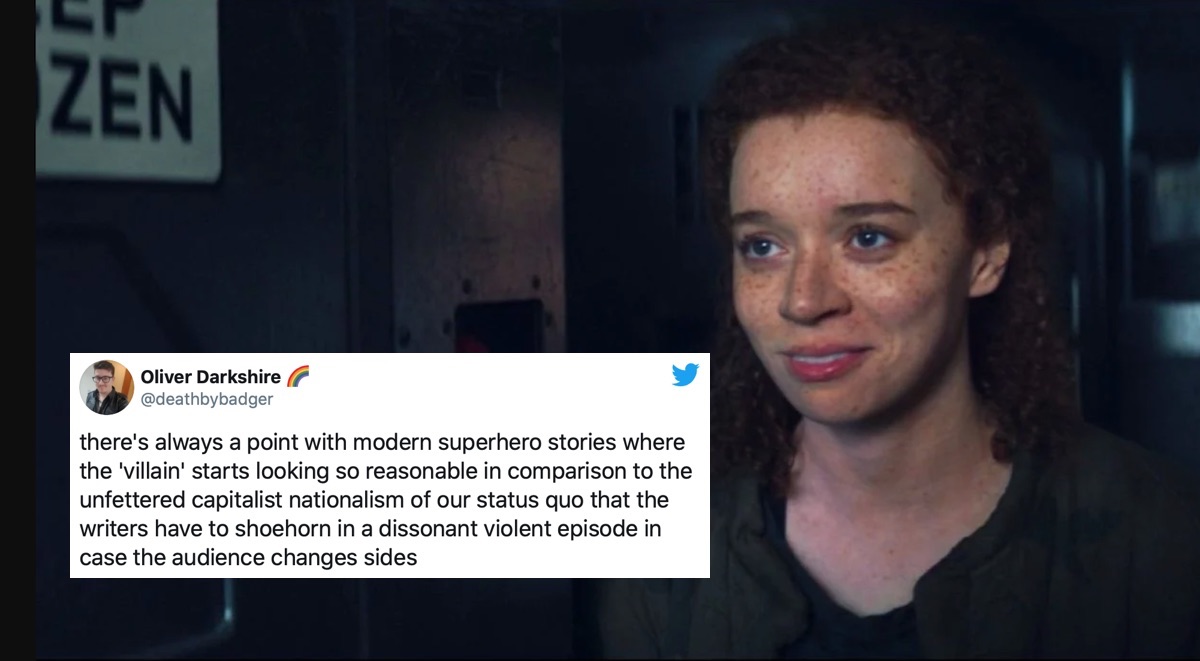 I know that I, like many a viewer of The Falcon and the Winter Soldier, had been thinking for weeks, “Karli Morgenthau hasn’t really done anything wrong.” The leader of the Flag-Smashers was using her serum-powered group to bring vaccines, medicine, food, and supplies to people still in displacement camps post-Blip. Uh, okay! Cool. I fully support this?

It was difficult to understand why we should find Erin Kellyman’s Karli and the Flag-Smashers at fault, especially when that was the opinion of new and terrible Diet Captain America John Walker. And in the most recent episode, Karli continued to be portrayed as caring about others and sympathetic throughout—that is, until the final moments.

“I just don’t feel like she’s a villain at all,” I loudly declared, mere seconds before TFATWS chose to make Karli into a villain-villain. At least I saw that shift coming. As soon as Karli said she wasn’t taking her car and told her companion Dovich (Desmond Chiam) to put on his seatbelt, I knew the car they left behind was going to explode. And explode it did, creating a massive conflagration that set the building alight and no doubt killed many of the GRC (“Global Repatriation Council”) workers there. The Flag-Smashers had left them bound and helpless, making their fiery death all the more awful and cruel of an act.

“Oh,” I said after that. “Well, I guess they’re going the supervillain route after all.” I can’t say I was too surprised, even though the bombing felt totally discordant with what we knew about Karli and her mission. This out-of-nowhere, out-of-character act neatly fit a formula we’ve all watched play out countless times before.

Karli blowing up the building was so incongruous to what we’ve seen of her thus far that Dovich reacted with the horror the audience was meant to feel. “There were still people in there,” he said to Karli, to which she flatly responded, “This is the only language these people understand.” With the flip of—well, a car—our sympathetic antagonist was turned into a bad guy through egregious and indiscriminate violence. And this is a problem that we see all too often rendered unto “villains” who have worthy, society-shaking goals that we might otherwise find ourselves supporting.

A tweet went viral following this episode of TFATWS that was commenting on Karli’s turn, but also the greater issue of causing a revolution-minded villain to perform a monstrous act just when it seems like they might be making a bit too much sense.

VILLAIN: war traumatised me as a child

VILLAIN: I would like a world with no war

VILLAIN: I shall now blow up this housing complex for no reason

There’s a fine line to tread with villains in general. We appreciate when villains are nuanced, interesting, and seem to have actual motivations for why they’re doing what they’re doing, rather than cackling and plotting to destroy the world just for kicks. But in superhero properties, there can be a huge gulf in how they’re portrayed based on how politically dangerous their ideas are. Is it a personal quest they’re on, or a world-changing one? The distinction matters.

Daniel Brühl’s Baron Zemo is a great example of a multifaceted villain whose aim is precise rather than threatening the foundations of society: he’s motivated to stop the Avengers and superpowered people in general because superheroes and supervillains got his family killed and his country destroyed.

We’re made to understand Zemo’s motivations—just like we understand when a hero is motivated out of a sense of vengeance for lost loved ones. And while Zemo clearly will undertake whatever means to an end he needs to get his result, he also is given the chance in Captain America: Civil War to state that he doesn’t enjoy or get a sense of satisfaction from violence. Don’t get me wrong, he’s done horrible things, including the bombing of the U.N. that killed King T’Chaka, but it’s the nature of Zemo’s desire to not radically change the whole world that allows him to be seen as worthy of understanding in the MCU. He is, as one of the replies to the tweet thread puts it, a “classic sympathetic villain.”

The scope of Zemo’s battleground is quite personal and focused on a tiny subset of people—those with superpowers. He’s not (at least at the moment) trying to alter the course of the world order or take it over. And that’s partially why Zemo gets to act as a sort of sleek antihero in TFATWS (again, at least at the moment), who runs around with Sam Wilson and Bucky Barnes and makes the audience laugh at his dancing.

This is in sharp opposition to how Karli Morgenthau is viewed; her aims should provoke sympathy, but her intended cultural impact is so big and so revolutionary that it threatens the status quo. As such she must be revealed as callously uncaring of human life by the same formula that the tweets above lay out.

We’ve seen this tactic employed with villains who seemingly have very good reasons as to why they’re doing what they’re doing—Black Panther’s Killmonger and X-Men’s Magneto spring to mind as the biggest examples of this from superhero films. These characters want to push back against systemic oppression, and so we see where they’re coming from. We may even root for them. Killmonger was right and Magneto did nothing wrong are phrases you’ll see often online. But then narratively, inevitably, they are made to do something so untoward that the audience is meant to cheer the heroes stopping them in the end.

I was reading this last night and thought, “Magneto did nothing wrong.” pic.twitter.com/GpuLdxMIKy

I thought this when I saw Spider-Man Homecoming and he fought the guy who was selling weapons to criminals, which is bad, unlike Tony Stark who sold weapons to governments, which is good.

I had really hoped The Falcon and the Winter Soldier would continue with the thread of Karli being a sort of Robin Hood figure, and have Sam and Bucky ultimately take her side against Walker. This could still happen, as the series has surprised me with some of its choices and direction. And The Falcon and the Winter Soldier certainly explores themes of forgiving people for past violence.

But I think it would have been a much bolder narrative choice to show a powerful rebellious leader that didn’t feel the need to perform random murderous acts. That would have made any drive to stop Karli in her tracks all the more morally complicated and compelling. Now people like chief status quo defender and faux-Cap John Walker can point out that Karli killed a bunch of defenseless people and justify his antipathy toward her.

There’s a villain whose motivations are understandable but wrong (the classic sympathetic villain), and then there’s villains who are 100% right and the writers just make them ultraviolent because they wrote themselves into a corner.

The point stands that our superhero media chooses to drive home, time and time again, that these rabble-rousers are up to no good when they come too close to unmasking the messed-up ways that our world works. How do you backpedal when you realize that your villain is making far more sense than the military-industrial complex the heroes so often draw upon?

“This is the only language these people understand.” When Karli speaks this line about her dissonant violent act, it’s hard not to feel like “these people” is actually directed at the audience. It’s as though we can’t be trusted to make the “right” decisions about who to support when villains are yanking back the curtain on the global inequalities and inequities that are making so many people’s lives miserable. We must have it spelled out for us in fire and blood to make sure we stay on the “right” side.

Hollywood superhero productions seem to think that excessive depictions of violence are the main markers that will help us identify villainy. They should trust us to make up our own minds. After all, we’re more than aware that evil can come in many forms under unfettered capitalism.