"In the end, all girls are like the Rose Bride." 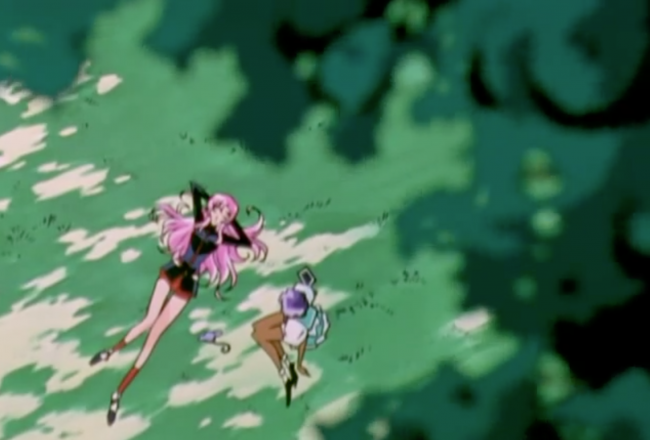 “You really are a fine woman… You really should remain a girl.”

You know, out of all the ways I thought this series could’ve ended, this wasn’t even one of the top five things I could’ve imagined. Not even the top ten. As far as story revelations go, Utena is perhaps the series that’s most shocked me, precisely because they spend so much time and energy laying down groundwork for a premise that is actually a myth. Let’s get into it.

From the very beginning of the show, the viewer has known certain facts: That Utena met a prince, was given a ring by him, and has been waiting for him to return. It’s also known that as she waited, she ended up taking not just this memory, but his princely bearing, to heart, making her a beloved figure in her school.

Only part of this story is true, and in the blockbuster episode “The Rose Crest,” none other than the Shadow Girls (as the Kashira Shadow Players) pull back the curtain on another myth, which is also both true and untrue. The Rose Prince had been the savior to all girls of the world, but his selfish little sister wished to keep him all to herself and became a witch to trap him away.

But this is again revealed to be a hollow mimicry of the Rose Prince/witch story, as told through the prince himself’s POV: taking young Utena by the hand and showing her the witch is actually the Rose Bride who can’t die, for she had actually sacrificed herself to free the prince of the duties that’d been slowly killing him, taking on thousands of swords in her body to atone for humanity’s loss. (Her prison looks eerily like a rose.) As a result, she bears crushing pain and isolation by herself—and the current “prince” figure (Akio) is the End of the World, rather than the savior of all girls. 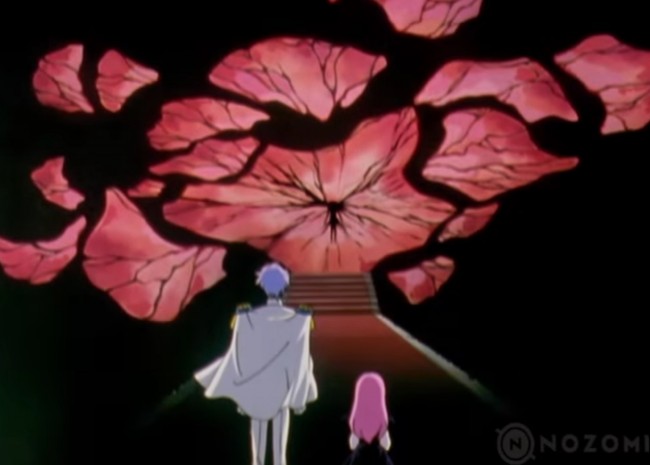 The prince/princess language really didn’t leave too much of an impact on me when it was threaded throughout the episodes before, but by the climax of the final arc, it was clear that Utena’s sex was an actual handicap to her princehood, as well as the foundation of her strength. Akio’s plan, which mirrored Touga’s original plan, was to drain her ambition, drive, and willpower (coded as masculine traits) in order to change her from a prince to a princess. This is mirrored in Utena’s costuming, in which we see her wear more dresses in a few episodes than she had the entire series. She is weak to Akio’s affections, and though Touga’s own renewed overture toward her is lightly rebuffed, this only strengthens Touga’s desire to actually save her.

Save Utena! She laughs, but the final twist is that by the end, it actually is her who needs saving, but no one can do that for her.

Let’s rewind a little. As Utena falls harder and harder for Akio (or rather, Akio’s princely side), Touga and Saionji (of all people) start to realize that blindly listening to the End of the World’s missives is in fact not good for their own self-interests. This is especially true for Touga, whose affections for Utena are proven genuine; this is all true in spite of the fact that Touga and Saionji pose for and with bizarre photographs with Akio, underlining how much power he gains from a certain kind of sexual vibe.

The sex part of this story takes the forefront again, but just as how you glean menstruation from Nanami’s egg episode, it’s easy to read the Student Council’s concerns about Utena’s waning princehood as a general statement on puberty. The metaphor is there: shedding the androgyny of childhood and coming into her own as a woman, both willingly and unwillingly. 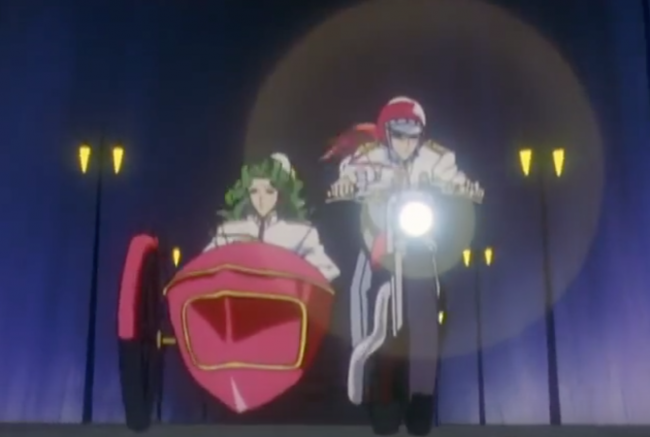 In order to save Utena, Touga calls on her for one last duel—the one he believes will grant her the power of revolution. They square off, with Saionji serving as Touga’s duel double this time. The stakes are high, for if she wins, the Student Council will never go after Anthy again; but should she lose, she would become “his woman,” presumably the prize and future of his revolution. It’s the same kind of reasoning behind Akio’s “defense” of Anthy — to protect someone, you keep them under your thumb.

Of course, Utena wins in a spirited battle…

…but not before Touga warns her about both the End of the World and the Rose Bride. Interestingly, no one spills the beans about Akio and Anthy—not even Nanami!—to Utena, leaving her to have her own repressed revelations about everything. And when she finally catches the Ohtori siblings in the act, she again does the unexpected by pretty much leaving her behavior unchanged (with one exception) and continuing to see Akio. It’s a testament to how far along she is in Akio’s trap—one cannot imagine early Utena retreating back into the shadows of the night at the sight of her friend. But! She takes the rose ring off.

She’s shrinking, to the point where Touga and Saionji don’t even think Utena will unleash revolution, and where Miki and Jury have to prod her about her choice, and where Nanami (again, of all people) warns her that she’s being dense. But Utena, thrust into this “final girl” position, keeps coming to the cusp of remembering the true prince story, and while she’s uncertain about that and of Akio’s role in her past, she falters. And then, moments after Utena and Anthy joke about poisoning each other (something that NEVER would’ve happened earlier on in their story and real, true friendship), Anthy tries to throw herself off of the planetarium tower, and Utena catches her and brings her back to safety. The sequencing between the poisoning and the almost-suicide is sudden; at first glance, I thought that it was a dream.

But it wasn’t, and when Utena goes to the dueling arena and definitively sees Akio as the End of the World, she’s gained some of her mojo back. Turns out, after she caught Anthy, the Rose Bride revealed the pain she bears in her body (because of the aforementioned swords) is constant, and that she’d been playing Utena all along, even through their genuine friendship. Utena feels the same way about playing Anthy, despite knowing deep in her heart that there was something going on with him, and between him and Anthy. They make up, and when Akio asks Utena to renounce her princehood and become a full-on princess, she fights back.

Yet, Akio reveals how deep his illusions go: The dueling arena itself is just the planetarium, and everything is projected within that space. (Both literally and figurativey.) As part of Utena’s “contract” with the prince, she had agreed to remain noble and pure—and though she “broke” those tenets with Akio, he holds her “sins” against her. There’s a real point to be made about Utena finally losing the savior sheen, but as held against her by Akio, that’s bull. And as Akio keeps pressuring her to join her in his moment of revolution, he both tells her to put down her sword and tells her that Dios, the original Rose Prince is gone; only Akio remains.

But Utena can’t and won’t forget what she now knows about Anthy, and begins to duel Akio. Things are actually going well for her until… Anthy stabs her, for the reason that because Utena is a girl, she could never be Anthy’s prince.

And in the wreckage of the dueling arena, Anthy/the Rose Bride ascends and is re-consumed by the swords of yore. Akio begins to hack at the Rose Gate, beyond which lies the power of miracles and revolution. Utena wanes, but after the Dios of her mind/her past betrays her, she picks herself up and with literal blood, sweat and tears, opens the Rose Gate to reveal—a coffin. After she pries it open, she finds Himemiya Anthy, the one perhaps trapped beneath the duty of the Rose Bride. Utena extends a hand, but Anthy doesn’t reach back quickly enough. The arena falls apart; Utena, presumably, falls victim to the swords which now have no central target.

Time passes, and Utena’s basically forgotten by the school. Akio is back at his scheming, but Anthy hasn’t forgotten, and she turns her back on her brother and the school in order to search for Utena. The story, which started on one girl’s vision of nobility, ends with another’s vision of freedom. What Utena fought for, at its heart, came true; she only brought revolution to one person, but that person now seeks to return the favor.

When I first heard about Utena, I believed that it was, at its heart, a radical queer love story. It is, in some sense; but to me, it also reads as a potent parable about sex, gender, and most of all, power. The revolution was the thing that had been dangled in front of everyone’s eyes, and the trouble became that everyone sought it for themselves, rather than working together to pull the curtain away from the puppet master manipulating them all. That there are gendered dynamics working within it, that there are moments of clear-eyed despair mixed with truly ridiculous imagery and sub-plots, all adds to the overall depth of the show. But it’s Anthy’s story, not Utena’s, that sets the final tone—a girl finding her way, after having been lied to and played with for so long. So long, good luck, and good riddance to those, well-meaning and otherwise, who’ve stood in her way.

Tweet your thoughts on the final episodes of Revolutionary Girl Utena to me here. This has been fun. Until next time!