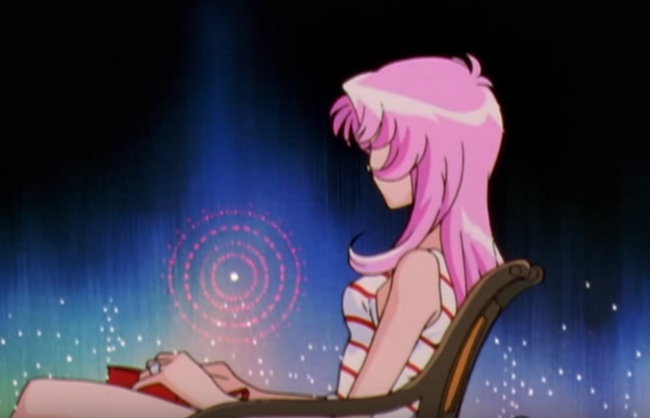 When Anthy was introduced to Revolutionary Girl Utena, she seemed to be the perpetual damsel in distress: always being pushed around by every and any other force at work at Ohtori Academy. Alas, as this particular arc demonstrates, she is part of the shadowy force that dictates the dueling doings going on. Utena is, somehow, both her savior and her puppet. Let’s get into the Akio Ohtori initiation arc.

The persistent haunting over this entire arc came in the form of the specter of sex—of self-exploration into and of it, of romantic and sexual feelings, and of desire finally reaching a boiling point that the desirer couldn’t understand. This was particularly at play with the arena duelists, Utena included, with it ultimately leading her into a trap set by two wily, incredibly capable players.

First off: There were several recap and filler episodes in this particular arc segment, but importantly, they all lent POVs and information that wouldn’t have been found in the straight dueling narrative. Particularly, Nanami’s egg episode (in which she, ah, believes first that she’s abnormal for having laid an egg, and then that she’s late in laying an egg, which is a “normal” procedure for all girls) is a potent metaphor for menstruation and/or the fraught emotions brought on by puberty. After all, most of these kids (and they are kids!) are in their mid-teens and have the emotional depths (e.g. shallow feelings) that most kids that age do. That makes Akio Ohtori’s serial seduction and manipulation of these children all the more messed up and defines the psychic toll taken on by Utena and the rest of the duelists into a particularly extra abusive dynamic.

As it turns out, Akio Ohtori, who is the human avatar for the End of the World has been the one dictating the events happening at “his” academy. While he’s ostensibly been keeping up appearances with his fiancée, Kanae, in reality (and, he’s only the chairman of the school because of his relationship with Kanae), he’s holding her in some sort of bondage and sleeping with literally everyone in order to cement his power (including, perhaps, Touga and Kanae’s mother.) In fact, it becomes clear that most of Touga’s behavior is based off of Akio’s in different measures, down to the juggling of lovers’ feelings and the manipulation and use of a younger female sibling.

As stated before, I long suspected that Anthy was capable of some weird stuff, and this arc both cemented and subverted that belief. Yes, her intimate relationship with Akio was formally revealed and caught by none other than a distraught Nanami, who believed (and was told) that her relationship with Touga was a lie. (Although in fact, he and she were both adopted into the Kiryuu family.) Yet, it’s Anthy who shakes Utena into readiness for the next round of duels, which is cemented into pair battles: usually a Duelist and a Bride, though this is notably subverted by Jury, who uses the AWOL-but-returned fencing captain Tsuchiya Ruka as motivation to confront her feelings about Shiori and also take the power of miracles into her own hand. Alas, this doesn’t work; Jury’s backstory and duel is, as before, the most devastating student council arc in the entire thing.

This is perhaps the greatest weakness of Utena: once it sets up particular dynamics (like the one between Miki and his sister Kozue, the weirdness between Nanami and her subordinates, and the predictable desperation of Saionji), it’s hard to escape them when setting up the duels. However, what makes the Akio Ohtori arc so particularly effective and devastating is the fact that the entire time, Utena is the one blindest to his true motivations. He and his stupid sports car make an entrance into just about every other character’s life in a potently negative way, but he separates his business seductions from his particularly studied one of Utena. The result is something that feels—and is—sad to the deepest degree.

But like I said before, the double duelist format provided for some interesting character relationship redefinitions. When Saionji, lured into the dueling arena again by Akio’s promises, almost gets the best of Utena during the first redo duel, it’s Anthy who takes it upon herself to believe in Utena and draw a sword of power from Utena, rather than vice versa. This format, of the duelist being offered up as a sacrifice for their weaponized power, is an interesting subversion of the idea that, in these relationships as in medieval times, there is a knight and a lady, with the former protecting and serving the latter. In this case, the lady is crucial to the knight reaching a certain level of power; without her (and sometimes him), there would be no knight at all.

In Utena and Anthy’s case, this is all exacerbated by the fact that Anthy and the Rose Bride essentially lead different lives, with the spacey Anthy that Utena “knows” and protects being the more unguarded personality half of the Rose Bride, who is calculated, calm, and willing to betray her other half’s friend. This is particularly magnified by the increasing strain being put on Anthy, who both realizes what she’s supposed to do and hopes to protect her only real friend.

But is it enough? In the end, Utena falls pray to Akio’s machinations, and by the end of where I watched, she’s already given her body to him willingly—or as willingly as she could given the true circumstances of her situation. She has no idea that she’s the lynch pin for a plot to control the universe, and perhaps the parallel universes that the End of the World and his car travel through. The addition of the Shadow Girls as a radio skit was particularly welcome and explicatory in its own way, but the thing that keeps me from being totally turned off from the series is the fact that this does indeed serve as its own explicit but honest depiction of growing sexuality, both how it operates in action and also how it can be twisted to meet adult ends.

I don’t want to believe that the cool and good characters in the show can be so easily manipulated. Sure, it’s easy to laugh or at least not feel bad when Nanami is consigned to her own worst personal hell (of being apart and not of blood with Touga), but it doesn’t feel so good to laugh at Miki when Akio and Touga convince him to taint himself with lust and pride in the service of “owning” Anthy. Nor does it feel good when Jury is played for a fool, twice, during her pre-dueling character arc. And of course, the viewer wants to scream at Utena, “Don’t fall for his games! Don’t pay into his plans!” And yet—she falls not just for Akio, but for the figure of the prince she’d long held in her heart. (It remains unclear if he’s actually, truly, the prince of her memory—at least to me.) She betrays her own convictions not to be the “other woman” and betrays her friend, who’s actually in an incestuous bind with the object of her (Utena’s) affections. She is blind to the reality of her situation, and she’s only going to get deeper and deeper into the End of the World’s final plot.

When, if ever, will Utena finally realize Akio’s true intentions? What exactly is he doing to Kanae to control her? Will the student council members ever buck the End of the World/Akio’s instructions? Can Anthy break free of her Rose Bride prison? What exactly does Akio show people when he kickflips onto his car’s hood, half-shirtless? (This is … a major episode sequence.) Until next time.

Tweet your thoughts on Episodes 24-33 of Revolutionary Girl Utena to me here. This should go without saying, but NO SPOILERS PLEASE!