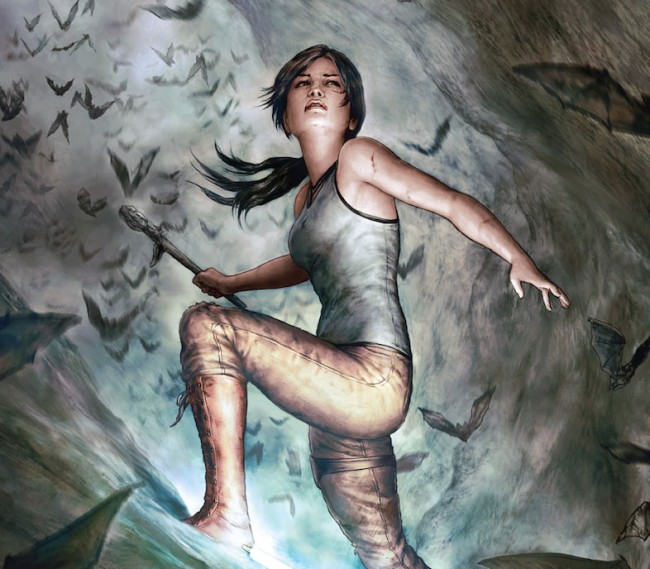 A few months ago, to my intense bewilderment, a friend recommended that I check out the new Tomb Raider comic. Now, I am not a gamer, and nothing about me suggests that I’d be at all interested in a scantily dressed archaeologist with dubious field research methodology. You can’t just run around the jungle in short shorts, people. Also? I think UNESCO frowns on tomb raiding.

Well, I can admit when I’m wrong. I mean, I’m not wrong about short shorts being improper attire for tomb raiding in the jungle—actually, you know what, just don’t “tomb raid,” full stop—but I suspect this Lara Croft would agree with me. Four issues into Dark Horse’s Tomb Raider, written by Mariko Tamaki with art by Phillip Sevy and colors by Michael Atiyeh, and I have a newfound interest in the character.

To recap the story so far: At an academic conference (Yes! This is a thing credible archaeologists do! Take note, Indiana Jones …), Croft grudgingly finds herself tangled up with the fate of a scholar who may know the location of a mushroom of immortality. The ensuing pursuit, replete with bad guys, motorcycle chases, and blowing stuff up, lands Croft in no small amount of peril at the bottom of a river in China. 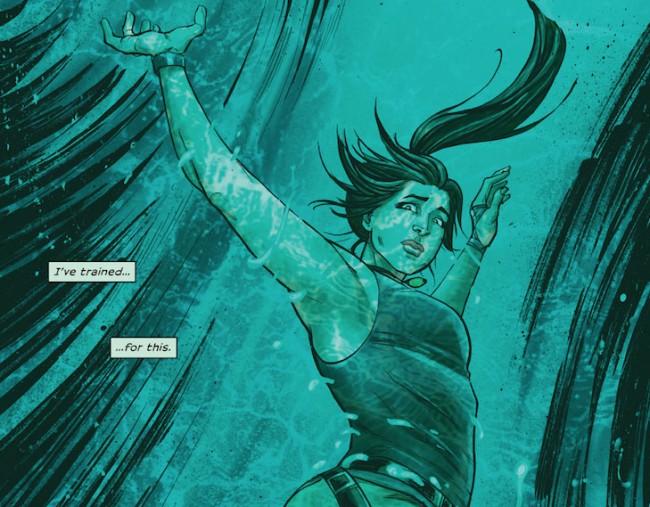 Croft isn’t being half-drowned for an excuse to show her in a wet t-shirt. Instead, we get a flashback of her training in a pool. How long can she hold her breath? What should she do while she’s trapped underwater? She knows exactly, because she’s trained for things like this.

In the same way that Croft’s participation at an academic conference lends credibility to her role as an archaeologist, the training flashback—one of many in the series so far—underscores her credibility as an action hero. Her brains and brawn aren’t for aesthetic effect, they are facets of her character built into the dialogue and artwork to give the reader a sense of Croft as a person and to push her story forward. This is why it doesn’t undermine her credibility when her friend and adventure companion Jonah pulls her out of the river. She isn’t a “strong female character” trope [TMS published an article about the problems with this trope in September, 2015]. Croft has proven she’s capable throughout the story, because she does the research and puts in the training time and has a plan, but a girl still needs friends, and it’s not disempowering when they help her out. 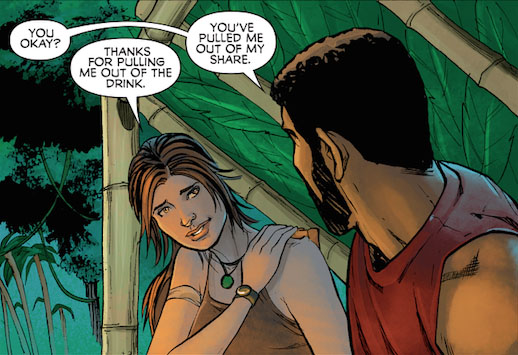 Jonah isn’t the only one of Croft’s friends who appear in the book, but I have no idea who any of the others are. I looked up Jonah because he has such a central role in this story, and I get the sense that I’m missing something by not knowing who some of the others are when she thinks of them. 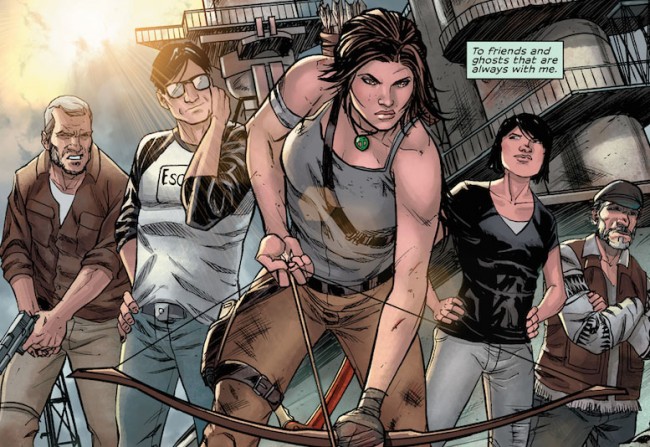 Maybe I need to set aside a few thousand hours to play through the games? Maybe I need to go back and read previous comic runs? Maybe the upcoming movie, starring Alicia Vikander, will explain some things? I’m intrigued enough to stick around and find out. If any of you readers have suggestions for me about where to start, let me know in the comments!

Tia Vasiliou is a Digital Editor at comiXology, where she is an occasional podcast guest on The ComiXologist. You can also find her at the I Read Comic Books podcast or on Twitter @PortraitofMmeX.