Review: The Seventh Son Is an Incoherent, Exponent-Obsessed Mess

Here is Jeff Bridges punching a bear, are you not entertained? 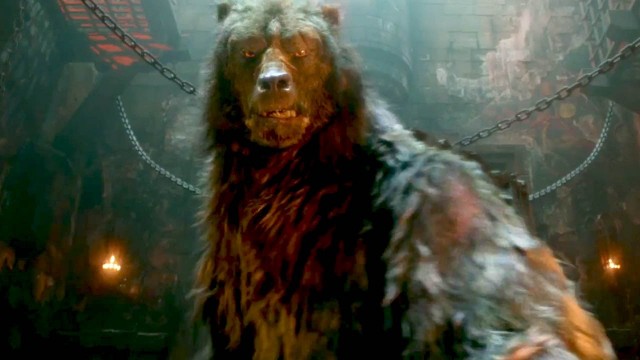 If the scale by which we’re now judging so-bad-they’re-good movies is “implausible books to give J.Lo,” Seventh Son is 1/7th of a first edition of The Iliad out of 77. Let the movie’s year of delays and inter-studio politics serve as a reminder: you can’t give a turd any redeeming qualities, no matter how long you polish it in post.

Seventh Son‘s premise has all the necessary ingredients for a fun, campy fantasy movie: Master Gregory (Jeff Bridges) is one of the world’s last remaining “spooks,” entrusted with defending the mortal realm from supernatural forces (dragons, spooky bears, women, etc.). Bridges takes on Tom Ward (tiny Kit-Harington-nesting-doll Ben Barnes) as his apprentice, and attempts to train him in the spook lifestyle so the pair can defeat evil witch Mother Malkin (Julianne Moore) .

Although Seventh Son‘s cast made the wise choice to ham it up (Jeff Bridges’ accent. I just can’t), the movie itself is self-important and intent on hammering home incongruously serious thematic elements, which might not be so frustrating if the film’s depiction of women or people of color didn’t also destroy most of its credibility. Seventh Son suffers from Season of the Witch syndrome, in that if you’re going to have a film in which 100% OF THE FEMALE CHARACTERS ARE WITCHES, it’s important to acknowledge the implications of that choice.

Obviously witches as a fantasy trope have different connotations than those in historical fiction, but nearly every female character in Seventh Son’s universe is a duplicitous, conniving supernatural villain. 100% of the movie’s women are either killed or depicted as obstacles standing in the way of Bridges or Barnes’ noble cause.

Women aren’t the only villains in Seventh Son‘s bizarro version of the Dark Ages; the movie’s depiction of people of color is also incredibly one-sided. Without exception, every person of color in this movie is a magical villain. Most of the film’s villains are people of color. Seventh Son is a movie where the presence of one’s soulmate is signified by a blinding blue flash the first time you touch, but a non-white protagonist apparently would have strained believability.

If you think I’m over-analyzing, keep in mind that there’s literally so little to Seventh Son‘s 102 minutes that it’s almost impossible not to notice its lack of self-awareness in regards to gender roles and diversity; if Seventh Son had any kind of substantial plot, characterization, or relationship to time and space, its representational faults might be less evident.

If you must watch Seventh Son, watch it at home, with friends, drinking every time someone says “seven” and fast-forwarding in between all the (admittedly cool) monster-fighting scenes. 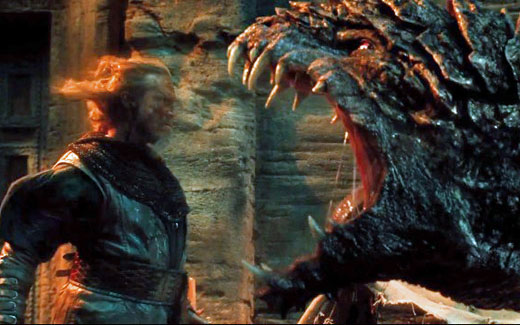 This shot is it. That’s all you need to see.