Review: The Nice Guys, the First Great Comedy of Summer | The Mary Sue

Review: The Nice Guys, the First Great Comedy of Summer 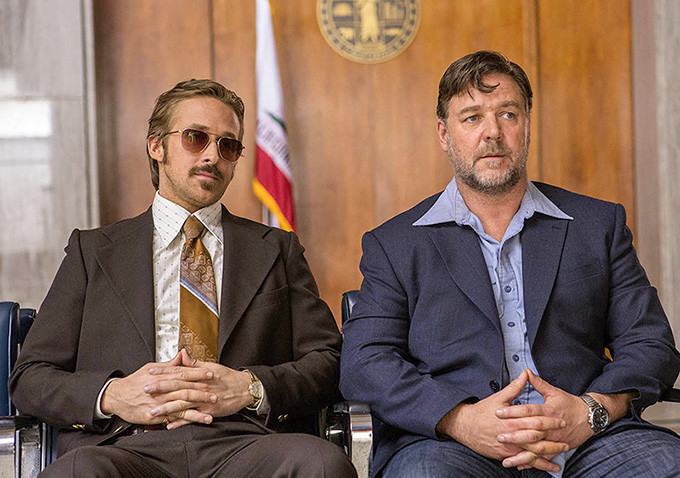 I know, we’re pretty much a month from the calendar’s official start of summer. But at this point in the movie release schedule, we’re about to be in full swing. And so far, we have three comedy films which will be competing for funniest comedy of the year: Love & Friendship, Hunt for the Wilderpeople, and The Nice Guys. Love & Friendship’s already in limited release (it might be hard to find, but totally worth seeking out) and you’ll have to find Hunt for the Wilderpeople a little later this summer. But The Nice Guys is out this weekend in wide release, and it really is that breath of fresh air audiences have been asking the big studios for. Sure, the big budget movies can be great, but variety is the spice of life, and sometimes you just want a breezy, funny, thrilling comedy…something The Nice Guys delivers with a vengeance.

Shane Black returns to his action-comedy roots (he’s never really ventured that far, even with Iron Man 3) but goes back in time to the 1970s. The guys of the title are divorced enforcer Jackson Healy (Russell Crowe) and private detective/widowed father Holland March (Ryan Gosling). A former client of Healy’s goes missing and after a few violent encounters, the two join up to find her and find themselves deeper than they could have expected. I know that sounds vague, but a lot of the comedy comes from the way twists are spooled out during the movie.

And it should be known that part of the reason The Nice Guys is such a fun and funny movie is because of the way Black uses plot twists and characters for humor. The story might not ultimately be that important; I think I’d enjoy a second watch knowing how things unfold. But it also isn’t just some generic base to put the jokes and action set pieces on…they all work in tandem to give an entertaining structure to the movie, and ultimately make it all the more enjoyable. That also means taking breaks for character and plot development that most other comedies wouldn’t. It isn’t a million laughs, but the laughs The Nice Guys earn are big and solid moments throughout.

And the secret ingredient this time has to be Ryan Gosling’s pitch perfect comic performance. I know Gosling is a charismatic performer, and showed comic spark in Crazy Stupid Love (and his SNL/talk show visits), but his performance here really is something of a game changer for him. The commitment he gives to all his roles is still evident on screen, but his own light touch as a personality bleeds into the character. There are moments when a glance at the camera almost seems to show a twinkle in his eye, like he’s enjoying every single moment he’s on screen. And the biggest discovery this movie offers is…Gosling is brilliant with physical comedy.

Australian actress Angourie Rice plays his daughter Holly, and she is also somewhat of a discovery here. Like a mix of Veronica Mars and Nora Charles, she plays Holly as a smart, resourceful teenager with the good heart the movie needs. She and Gosling are so good together, they could have carried the movie entirely on their own and I still would have happily watched. But then we wouldn’t have gotten Crowe, who hasn’t been this enjoyable on screen in a long time…and I’m not sure he’s ever been this funny before. While not on the same level as Gosling’s performance, he is often hilarious and fully committed. The remaining cast members are all good (perhaps not stand-out but solid supporting work), but their roles and action within the film really should remain hidden because of how they’re revealed.

The Nice Guys isn’t really period specific. The movie doesn’t look like a movie from the 70s as much as it looks like a retro movie from the late 80s and early 90s (when Black first started making movies) set in the past. The movie isn’t patronizing about its period detail; Shane clearly thinks the 70s in LA were pretty cool. But it also doesn’t treat the time as so precious they can’t play within it. He uses the style to create a world, but focuses on characters and narrative to build that world up into something lived in. We hear so often about style over substance, The Nice Guys is the perfect example of how to have both. Although if there is one (ultimately minor complaint) it’s using women to establish that style of the adult film world…it ultimately isn’t as bad as I feared, but there were many times it felt like it was going over the edge…but for the most part, pulled itself back.

Since the trailer for The Nice Guys, I’ve been apprehensively excited about it. It looked potentially entertaining, but comedy trailers can be tough to judge. The incredible thing about The Nice Guys is that as jazzed as I was to see it based on that trailer, there was still so much that hadn’t been spoiled for me, I walked out on a high. The Nice Guys is a simply a fun, smart, and totally entertaining comedy, with three characters you want to go on the adventure with.