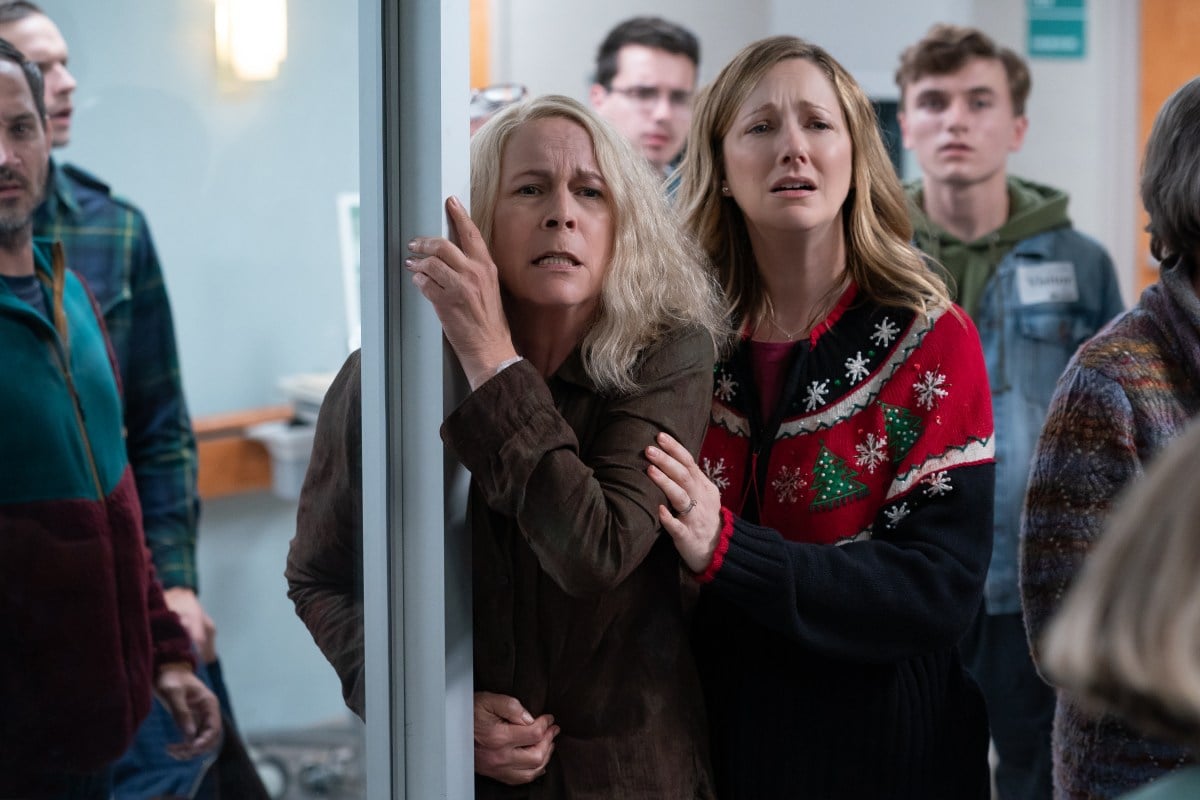 David Gordon Green’s 2018 reboot of Halloween was a breath of fresh air for the tired horror franchise. With creative kills, solid humor, and and a smart script, the new Halloween was a propulsive reboot that cleared the decks of the less successful sequels. But it was Jamie Lee Curtis’s return as final girl Laurie Strode that truly brought the film to life. The 2018 film painted Curtis as a reclusive survivalist, hiding out in a booby-trapped cabin in the woods and processing decades of PTSD. The film focuses on the legacy of generational trauma, as Laurie struggles to relate to her daughter Karen (Judy Greer) and granddaughter Allyson (Andi Matichak).

Halloween came out during the peak of the Me Too movement, and plenty of think pieces were written about Laurie Strode reclaiming her narrative and fighting back. So when the film’s finale sees three generations of Strode women kicking Michael Myers’ ass and leaving him to burn alive, you couldn’t help but cheer.

So it’s all the more disappointing when Halloween Kills spends its runtime separating the Strode women and largely resigning Jamie Lee Curtis to a hospital bed. It’s a development that can’t be helped, given that the film picks up in the immediate aftermath of its predecessor, with Laurie rushed to the hospital after being stabbed by Michael. But while Karen and Allyson are still mobile, the film abandons their narratives to focus on the citizens of Haddonfield.

If Halloween was a film about family trauma, then Halloween Kills is a film about how that trauma infects and terrorizes society at large. And the legend of Michael Myers works as a psychic scar on the town itself. In a fun bit of fan service, Halloween Kills re-introduces some legacy characters like Tommy Doyle (Anthony Michael Hall) who was one of the kids Laurie babysat in 1978, along with Lindsey Wallace (Kyle Richards, the Real Housewives star who reprises her childhood role). Other returning characters include Nancy Stephens as Marion Chambers, the retired former assistant to Dr. Sam Loomis and Charles Cyphers as the former Sheriff Bracket from Halloween II.

It’s Tommy who leads the town to go after Michael Myers, whipping up their rage and fear with chants of “evil dies tonight.” But the thing about mobs is, once they’re formed, they’re nearly impossible to control. And if someone gets smeared as an enemy, then no amount of pleading will stop said mob from burning them at the stake.

The out of control mob taps into our current trend of American psychosis, where Fox News and Facebook have riled up our uneducated populace with conspiracy theories, lies, and hate speech. When the mob storms the local hospital, viewers can’t help but be reminded of anti-mask protesters and unwarranted attacks on health care professionals across the country in the wake of the pandemic.

Once the mob finds someone who they believe is Myers, they storm the hospital to attack him, despite Karen’s desperate pleas that they’re after the wrong man. A chilling sequence sees the mob break into a hospital wing much in the same way that people stormed the Capitol building on January 6th. Those who claim to be terrorized soon become the terrorists themselves.

It’s a potent message, but one that remains too disjointed and muddled for the film to get a handle on. It is also especially frustrating to see the crowd continue to make the same mistakes we’ve seen in countless horror films (Don’t split up! Bring more guns! Don’t assume the dead guy is dead!). The film also suffers from middle movie syndrome, as the second installment of a planned trilogy that wraps up with next year’s Halloween Ends. As the middle piece, the film struggles to tell a contained, satisfying story as opposed to functioning as a bridge between the first and last chapters.

But with all its overt political messaging, Halloween Kills pulls focus from the Strode family, and squanders the best and most human parts of its predecessor. When we do spend time with Laurie Strode, she’s hamstrung by bad, repetitive dialogue about the nature of evil. The result is a soulless, grim sequel that lacks focus and levity. Here’s hoping they stick the landing with part three.