REVIEW: IFC’s The Feast Blurs Lines Between Who Has a Seat, Who’s on the Menu 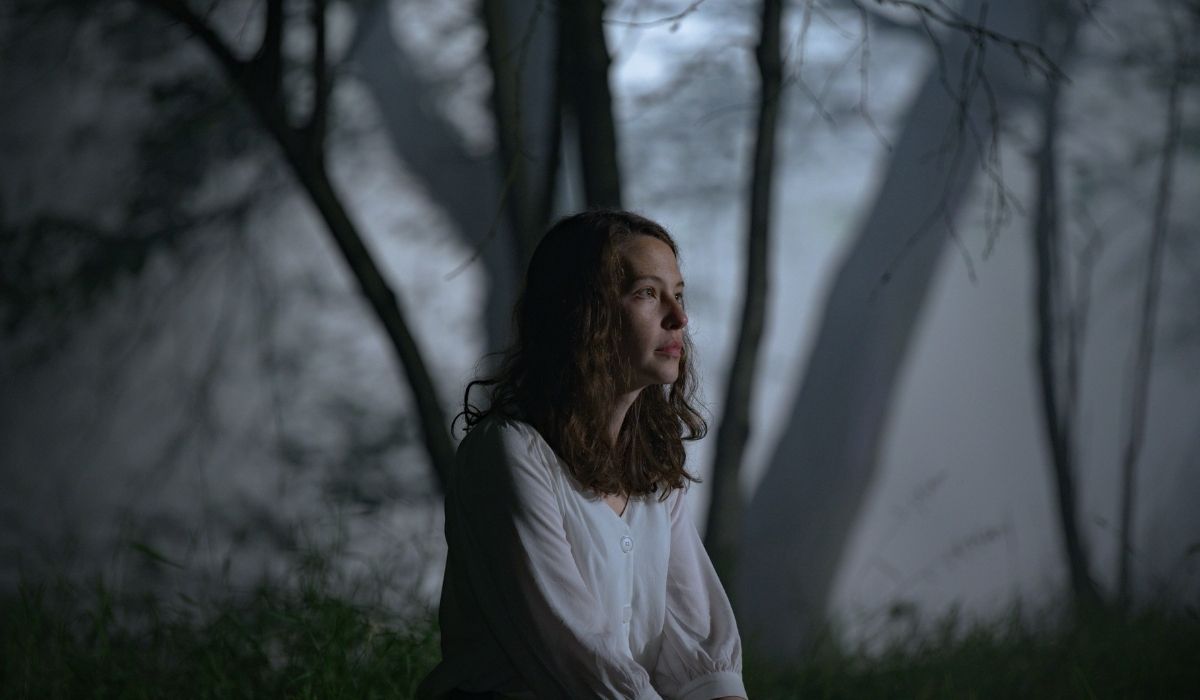 When I first saw the trailer for The Feast, I was getting horror vibes somewhere on the spectrum of social commentary in Jordan Peele’s Get Out and the thriller-horror in Ready or Not. Both feature an outsider coming in to meet a tight-knit family and body horror elements. That is where the similarities end, however, as the main character, Cadi, played by Annes Elwy, is not related to the family in any way. Instead, she’s a helping hand for an intimate and very important three-course dinner party in which the guests are unknowingly attending their last supper.

Directed by Lee-Haven Jones and written by Roger Williams, The Feast stars Elwy and Nia Roberts as Glenda, the mother. The men in the family include the father, Gwyn, played by Julian Lewis Jones; the son infatuated with cycling, Gwierydd, played by Dion Davies; and the alternative, always-has-a-lighter son Guto, played by Steffan Cennydd.

Following the prologue, part one begins by showing the modest but certainly sleek countryside home of the family—a place Glenda admits is to get away from the city, while also having the luxury available. Most rooms are empty, half of them are outdoors, and each adult member is engaged in a different activity—all but one of which gives you a peek into their personality.

If it weren’t clear yet that class and wealth are on full display, the moment the two main characters meet, Cadi and Glenda, you’re made fully aware. Glenda chides Cadi for being late, and the story sets up that Cadi is second-choice hired help to aid the family preparing for this important dinner. Apparently, none of the other fully adult people in the house (all men) are up to the task of cooking?

Since most people are in no position to hire help for cooking, this dynamic immediately puts Cadi in a sympathetic position, even as she digs through their belongings at every opportunity. That’s something that, despite the toxicity of the family and probably less-than-stellar voting record of the rich patriarch as a member of the U.K. Parliament, the filmmakers’ and Elwy’s performance challenge throughout the film.

While the film is set in Wales, with Welsh actors, I half expected Irish actor Barry Keoghan (The Eternals) to reprise his terrifying role in The Killing of the Sacred Deer. In addition to the performances of Elwy and Davies, the atmosphere continually returns to an unsettling aura. That’s a credit to cinematographer Bjørn Ståle Bratberg, editor Kevin Jones, and others on set. I’m not even talking about the body horror (which is graphic, and you do get), but there were mundane shots framed and edited in such a way as to make the viewer squeamish throughout the film.

Sometimes, it felt like the story was more concerned about the tone and surprise, that there were missing elements that should have been mentioned earlier. For example, while the final executions (pun intended) were built up well, the film would’ve been a bit stronger if the danger of the forest weren’t mentioned in a later act.

This is a movie that is worth a rewatch because once the truth clicks, you start to go back to earlier moments and wonder if you misinterpreted elements or were self-projecting. Fans of fantasy/folk horror or those who keep up with global politics (global being the key word, meaning not isolated to anyone one region or county) will catch on sooner and have the luxury of seeing each carefully placed moment.

Marketed as the perfect holiday film for its family gathering, laborious meal preparation, and ritualistic attention to details of the small things (like place settings at a table), the filme also unveils more as the story continues. Thematically, we see the parallels between the realities of the exorbitant consumerism of the post-harvest holidays (basically all of November to December). In The Feast, this subtle construction plays out in small, but important props and set details.

Another way this is laid out is in the main characters outside of Cadi—who is almost like an empty vessel for the audience to relate to for about half the film because she, too, is observing the family. The mother grew up a farmer and ascended to wealth in a way she is disconnected from her long-time neighbors, the father is a tired politician that is very comfortable with traditional gender dynamics, and their two sons react to this upbringing in polar opposite ways.

There is even a slender character whose name is Euros (played by Rhodri Meilir) who never stops eating. That might be a common name in the Kingdom of Wales or of somewhere in Europe, but also it is literally the name of the currency for those within the European Union.

It also plays out in the reason they are gathered there to begin with. Arguably, this is peanuts compared to the larger themes at play (which I won’t spoil), but it really does compliment it because the main point of tension comes from this insatiable greed and the economy built around it.

The Feast releases in theaters and video-on-demand on November 19.