Review: Star Trek Beyond Embraces the Heart of the Franchise (With a Few Good Explosions)

I’ll preface this review by confessing that I haven’t always been a Trekkie. In fact (and I may be cursing myself as I reveal this), Star Wars was my first-ever internet fandom. While I initially embraced this new series of Star Trek movies, it was partly because I knew they were differentiating themselves as a universe separate from the original TV series; therefore, it didn’t matter that I wasn’t familiar with every episode of The Next Generation or DS9. Everything I was watching unfold on screen in front of me was part of a different world, even if the names were somewhat recognizable. Now, though, as I currently watch my way through each of the Star Trek shows and films, I’ve developed a new appreciation for the franchise as a whole, and it was with that appreciation that I sat down to watch Star Trek Beyond.

Star Trek Beyond opens nearly three years into the Enterprise’s five-year journey to seek out new life, to boldly go, etc., and James T. Kirk (Chris Pine) is starting to experience some serious restlessness. (In his opening captain’s log, there’s even a line about his routine starting to feel “episodic”, which got a particularly good chuckle out of me.) Of course, it’s typically when our crew is at their most nonchalant that something happens to throw them completely off their axis; in this case, that something is a big bad alien commander named Krall (Idris Elba). One thing leads to another, and in the aftermath of Krall’s first attack Kirk and his crew find themselves adrift, stranded on a foreign planet with the Enterprise completely destroyed. It’s a gutsy move by co-screenwriters Simon Pegg and Doug Jung, because taking the Enterprise out of the equation also removes a very important character from the story. Without the Enterprise, who is this Starfleet crew? How can they work together to survive Krall?

The answer doesn’t come without some help, namely from alien Jaylah (played by Sofia Boutella and inspired by Jennifer Lawrence’s character in Winter’s Bone; even her name is basically a form of J. Law). She has her own reasons for wanting to go up against Krall, though her readiness to rely on the Enterprise crew was almost a little too trusting. Perhaps she simply recognizes capability when she sees it?

Krall, on the other hand, is the perfect Star Trek villain. Initially, he seems to embody pure ruthlessness until you begin to understand his motivations and what led him up to this point. While I was originally apprehensive of seeing Idris Elba in a role that hid his face and skin from view, the film cleverly subverts the recent disappointing trend of Hollywood covering up its black actors in a way that doesn’t diminish his identity. (There’s more to say on this, but it’s spoilery, so I’ll hold my tongue for now and wait until you’ve seen it to discuss.)

Director Justin Lin is most recognizable for his work on The Fast and the Furious franchise, and while there some concerns about whether or not this movie would come off like a “Fast and Furious set in space” when the first trailer was released, Star Trek Beyond doesn’t earn that comparison. While the big action sequences are intense in their devastation, the one thing the film falls prey to is frenetic camera work, which only serves to disorient the audience and makes it difficult for us to tell which way is up.

What this film does have to ground it is its cast. Even without the Enterprise, all of the characters we’ve come to know and love in this Kelvin universe are still just as familiar. Dr. McCoy (Karl Urban) and Spock (Zachary Quinto) bicker as often as an old married couple, and while Spock’s relationship with Uhura (Zoe Saldana) is somewhat of a question mark when the story begins, the movie doesn’t waste plot time dwelling on its future.

Similarly, the relationship between Hikaru Sulu (John Cho) and his husband (co-screenwriter Doug Jung, who stepped in after the original actor dropped out) is downplayed to be wonderfully normative. I’ve spoken several times about this already, most recently in our TMS live chat, but in an established universe where alien races embrace things like polygamous relationships or a matriarchal society or naked weddings, loving who you love without needing a definition for it seems like the most obvious non-issue. In Star Trek Beyond, it’s exactly that, and it’s a refreshing sight to see.

In fact, it’s a testament to this script overall that the story contains so much heart without needing to shoehorn in a romantic plot between two characters. Romance and friendship happens naturally, wordlessly, in little moments–one person putting an arm around another, or someone kissing someone else on the cheek. The crew of the Enterprise truly is one big family, and the film proves that they don’t need the tie of the ship to have each other’s backs anymore. 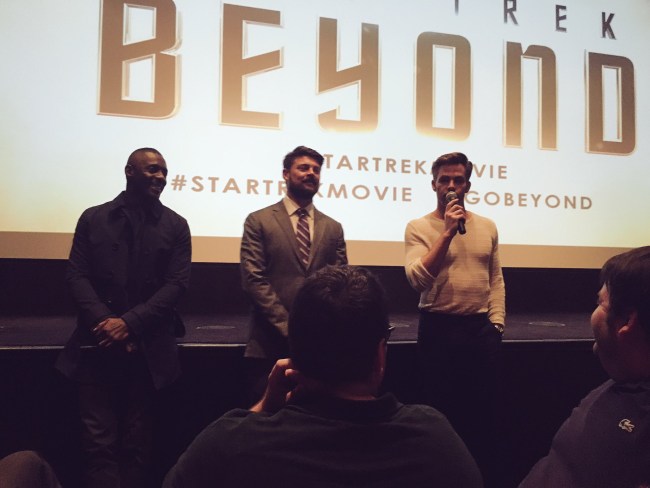 Photo by the author

When I had the opportunity to briefly speak to Simon Pegg at the screening I attended, he said that one of the things he wanted to accomplish most in his script was emphasizing the heart of the lasting story of the Star Trek universe; otherwise, it’s just a bunch of explosions. Good news, then: Star Trek Beyond definitely delivers on the heart. But the explosions are pretty great, too.