Holy smokes. It’s no terrible secret that on top of a love for comics and video games, I am also an RPG nerd (and sometimes RPG artist, if I may own-horn-toot). I am not alone in my penchant for high fantasy, either, but finding high fantasy themed anything that doesn’t slap some boobplate or a chainmail bikini on the ladies is sometimes few and far between. I know the official D&D comic lost me after the first issue, and while the Pathfinder comic is a better choice it still has its moments of broken spines and in general didn’t grab me. I mean, basically, D&D has long been the bastion of epic but predominately male heroes, and while women have always been players at the table, finding representation within that game is still rare enough that when you find it, you hold onto with everything you’ve got.

And boy howdy am I holding onto Rat Queens so damn hard.

I mean, not only is the art gorgeous, but never have I ever seen such an incredible cast of women where I wanted to be/hang out with/make out with all of them in their own way. Each of these characters comes out the gate as fully formed characters, each with a distinct personality dripping with backstory. And where Pathfinder lost me in terms of immersion—a little too heavy-handed with the old-timey Tolkien-esque dialogue and dramatic circumstance—these characters are immediately relatable. I think it has something to do with the way the author has managed to adapt modern anachronisms into a world full of swords and sorcery and make it feel entirely natural and relatable.

For example, why shouldn’t a high fantasy world have some kind of cell phone equivalent? 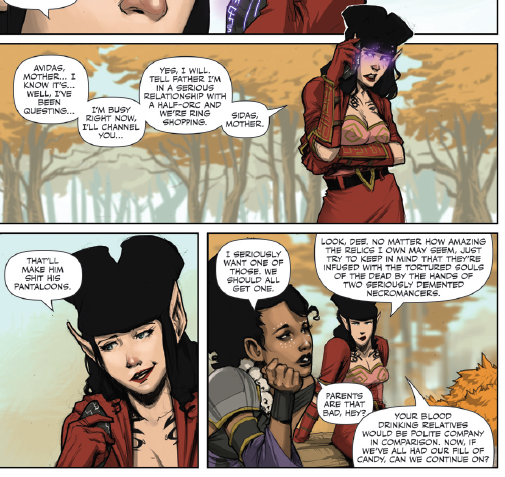 Even if it does come with a price.

Plot-wise it does start out as your usual standard high fantasy adventure. Party gets together, party gets handed a basic quest, basic quest gets infinitely more complicated; these are how our most memorable campaigns begin. Where Rat Queens shines is in taking the tropes we know and love and subverting them with almost whedon-esque skill. That’s right, I’m comparing this to our beloved female characters in Buffy or Firefly and telling you, point-blank, Rat Queens is on their level and then some.

I’d write more but I’m still not over the incoherent internal screams of joy and it’s hard to form sentences over that excitement. Pick it up and check it out for yourself! 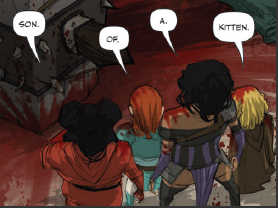 How about you? Read it? Loved it? Something else you liked better? Let us know in the comments!