Review: Marvel’s The Unbeatable Squirrel Girl Vol. 1 as Unbeatable as the Name Suggests 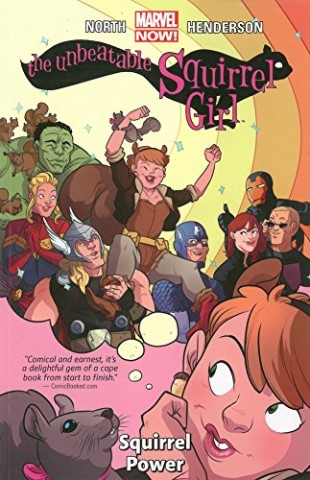 In the current comics climate of superheroes out-brooding each other and dealing with dystopian scenario after dystopian scenario, it’s easy to forget that comics from the Big Two can also be fun. Well, if you’re looking for pure joy in comics form, run – don’t walk – to your local comic shop to pick up a copy of the newly-released trade, The Unbeatable Squirrel Girl Vol. 1: Squirrel Power.

My only experience with the character of Squirrel Girl was in reading Great Lakes Avengers and reading her stint as a nanny to Jessica Jones and Luke Cage’s baby. I loved the character, but I never would’ve imagined her as the star of her own book. So I’ll admit that I was skeptical when I first heard that Marvel was giving Squirrel Girl her own title. Could a character like that actually carry an entire story? As it stands, the timing couldn’t be more right for Squirrel Girl to burst onto the scene. Readers and film audiences seem to appreciate the lighter tone of Marvel’s material. Couple that with the popularity of the cheery, earnest protagonists of Steven Universe or Unbreakable Kimmy Schmidt (OMG, Unbreakable Kimmy Schmidt/Unbeatable Squirrel Girl CROSSOVER!), and it’s easy to see why a character like Doreen Green, aka Squirrel Girl, would get her own book.

And boy, can she carry her own story. Her larger-than-life personality is enough to fill a million books, and that’s without the squirrel blood and super powers! After spending her teen years in Avengers Mansion, Doreen is off to college, and she’s determined to be a “Normal College Student.” Well, as normal as she can be with a squirrel BFF that she talks to named Tippy-Toe. This means that Squirrel Girl has to be a big secret, which is a difficult one to keep when you’ve got a huge tail you have to shove in your pants.

The very best thing about the character of Squirrel Girl is that she’s so unapologetically herself. While she might feel bad about a poor choice with regard to saving someone, or something that’s gone wrong in her life, she never sees anything wrong with herself. She talks to squirrels? Awesome – squirrels are great to talk to! Her tail shoved down the back of her pants makes her look like she has a big butt? Awwww, yeah! We should all be lucky enough to have Squirrel Girl-levels of self-confidence.

The other thing that’s amazing about Squirrel Girl is that her greatest power doesn’t come from having squirrel blood…it comes from her strong personality. The thing she’s best at – and the thing that often allows her to defeat villains – is talking to people and becoming their friend. Much like Kimmy Schmidt brilliantly takes down a catcaller by being really, really nice (I REALLY want this crossover to happen! Kimmy and Doreen would be besties!), Squirrel Girl defeats villains like Kraven or Galactus by talking to them, listening to what they have to say, genuinely caring about people, and offering solutions that appeal to what those villains really want and need deep down. She excels at Getting to Know You, and this exchange between her and her best squirrel bud pretty much sums it up:

Squirrel Girl (talking about her need for a secret identity): My enemies might go after my loved ones, T!
Tippy-Toe: What enemies are you talking about? You’re the unbeatable Squirrel Girl! Who doesn’t like you?
Squirrel Girl: I don’t know! Jerks, I guess?

The thing is, Squirrel Girl gives everyone (even Galactus, even Deadpool!) a chance, because she believes that most people aren’t jerks – they’re just people who are sad or mad about something, and she tries to help them fix it.

Writer Ryan North does an amazing job infusing this character and her story with life. Not only that, North makes it hilarious both through the dialogue and situations in which he puts her, but also via an awesome narration device employed at the bottom of every page that I almost completely missed at first, but once I spotted it, became my favorite part of the book! Along with the flash cards from Deadpool that she consults when she encounters a new villain or weapon. And then there’s the one issue where they do this thing with the letter column…. I won’t spoil it, but it’s too funny! I have never laughed out loud while reading a comic as I have reading Unbeatable Squirrel Girl.

North has an amazing partner in artist Erica Henderson, who seems to be drawing with Joy Itself instead of, you know, pencils. I love that all of her characters, even the villains, seem to be filtered through Squirrel Girl’s optimistic prism so that even dudes like Galactus seem way less scary. I wish we could all see the world the way she does. What’s more, I love how Henderson draws Squirrel Girl herself. Doreen Green isn’t fat, but she’s a sturdy, thicker, muscular girl, and I love seeing that body type on a girl in a comic.

Lastly, I love that the major supporting characters in Doreen’s life at school are characters of color. There’s her awesomely eccentric roommate, Nancy, a black girl who doesn’t fall into any racial stereotypes…mostly because she’s too weird (and slightly cat and knitting crazy), and who proves to be the best friend a girl who’s secretly a squirrel girl could have. And there’s also Tomas, a really nice, nerdy Latino into whom Doreen bumps on move-in day and who may or may not be a potential love interest! And Tippy-Toe has brown fur, which I guess doesn’t really count in this context, but she’s great, so I wanted to mention her.

In addition to the amazingness of the main issues, this trade is also a worthwhile purchase for the awesome variant cover art enclosed, as well as the first-ever appearance of Squirrel Girl in Marvel Super-Heroes #8 from 1991. In it, she has a surprisingly touching first encounter with Iron Man as she tries to apply for the role of his sidekick at age fourteen.

Squirrel Girl is too good for us. She’s not the hero we deserve, but she’s the hero we need, desperately. When shopping for comics on Wednesday, make sure your pile includes The Unbeatable Squirrel Girl Vol. 1: Squirrel Power. It’ll be the best thing you do this week.