Review: Horizon Zero Dawn: The Frozen Wilds Is More of the Same In the Best Possible Way

4 out of 5 angry, corrupted bear machines. 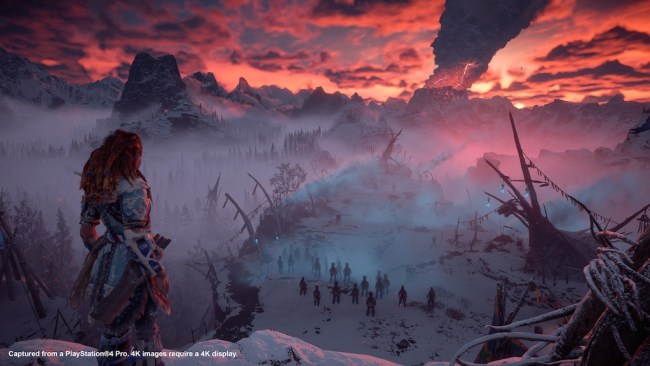 Horizon Zero Dawn‘s first major expansion, The Frozen Wilds, manages to feel similar to, and like a complete departure from, the original base game. Using this expansion as an excuse to get back into the world of Horizon Zero Dawn felt like getting re-acquainted with an old friend, where you’re reminded of the beautiful eccentricities that make up their personality. You can see how it would annoy some people to no end, and sometimes, in your own moments, you’re annoyed by them too, but you understand that those nuances are what make them, well… them. And most of all, you know that you love them because of those eccentricities, not despite them. That’s what it’s like playing The Frozen Wilds.

I’ll be honest: it took me a while to stretch back out and get back into the swing of things. I hadn’t picked up Horizon Zero Dawn for a little while, and getting re-introduced to the nuances of the combat, item management, and crafting systems took some getting used to all over again. If you’ve only just been playing the game, then you’ve got nothing to worry about. But if you’re like me and it’s been a while, you should probably settle in and get comfortable with the idea that you’ll have to shake off a bit of rust to get back into it. 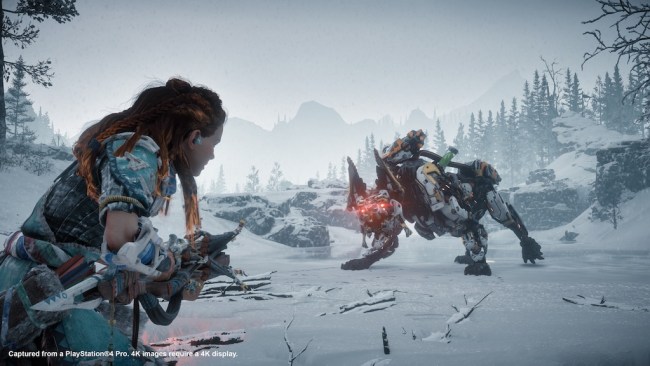 To its credit, though, the expansion does its best to weave itself seamlessly into the landscape of the original game. It begins like so many adventures do: via an overheard rumor in a crowded area. What’s more, it’s cleverly gated by—what else—a giant monstrosity of a mechanical bear who serves as a gatekeeper into the world of The Frozen Wilds. It’s a tough fight if you’re not ready for it, and suffice it to say that if your Aloy is under level 30, then you’re not ready for it. Even then, you might be a bit pressed to deal with that particular issue with ease, so make sure you come correct when you venture forth. (Sidebar: if you’ve already completed the original game, this expansion actually takes you back to right before its final act, a la some of Mass Effect 3‘s expansions and the like, so you definitely do not have to start all over just to experience it.)

Mechanically speaking, there aren’t any changes to combat or how Aloy gets around the world. Again, the expansion is designed to more or less blend seamlessly into the game itself. Truth be told, if anything, I was a bit underwhelmed by the expanded skill tree abilities, which mostly center on either repairing your mount or corrupted machine. There was one ability, though, that definitely felt like a major quality-of-life improvement: the addition of a “loot from your mount” skill, which, just, hell yes. Aloy also gets her hands on two new weapons over the course of a story, which basically translate to electricity and frost throwers.

I found myself hardly using them (if at all) throughout the meat of the expansion itself, but in some of the battles in the game’s final act, I leaned on them heavily. You also have an opportunity to pick up some new Banuk-themed armor and weapons for Aloy, which you can purchase with Bluegleam, which is a premium resource that’s been added to the game for this expansion. It’s fairly rare, and in my barreling through to complete the main storyline, I ended up with enough to pick up a rad new bow before the final act but not much else. I did skip more than a few side quests, each of which offered Bluegleam as a reward for completion, so that just felt like more of a personal problem than anything else.

Story-wise, the game doesn’t break too much new ground, as it once again places Aloy in a position of outsider to a group of people, the Banuk. She has to win in their trust order to achieve her goal of learning more about the world she inhabits. The trial to earn that trust follows many of the same beats from the core story (do this activity to earn some trust, complete this quest to earn more, etc.), though I’ll say here that this isn’t a knock against it. It actually feels a bit like a refinement, and though at first I felt like the addition of this “section” of the expansion was a ploy at inflating the game time, that doubt faded quickly as I settled into completing the tasks set before me. 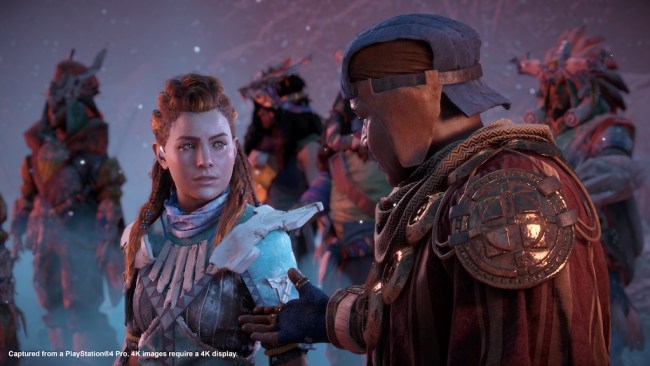 Part of what helped that feeling fade was the ever-excellent voice acting and much-improved animation. In the original game, there were more than a few points where the facial syncing and animation felt just a bit off, but in the time since its original release (and especially in this expansion), things have gotten so much better. This detail extends into the “B-plot” of the expansion, so to speak, which unlocks through the diary entries and voice logs Aloy finds through her Focus tool. The voice acting there is equally as excellent as that of the main game, and suggests an attention to detail that is very much appreciated. I found myself invested in the backstory, the whys and the wherefores, rather than viewing these bits and bobs as pieces to be collected.

This game feels like more of the same—both good and not-so-good. It’s good because it’s an addition to an already fun game, and serves as a fine excuse to spend more time in a captivating, downright gorgeously designed world. It’s not-so-good because it still borrows from some of the more problematic elements of cultural appropriation that plagued the core game. There were even a few points where I worried that the expansion might delve into The Last Samurai territory, but those fears were later upended and dispelled by a story point that I’ll not get into here for fear of major spoilers. Suffice it to say that in amplifying what made the core game so great, they also managed to amplify some of the problematic elements as well, and that’s something to keep in mind. (Paste put out an excellent essay that explores the expansion’s issues with cultural appropriation.)

If you enjoyed Horizon Zero Dawn, then exploring The Frozen Wilds is well worth your time. It’s a lot of game for a decent price, and again, it gives you more to do in a world that’s already pretty fun. I think it’s a worthy addition to one of my most favorite games of the year, and I think it could be yours, too.

Sony provided sample copies of the expansion for the purposes of this review.