Review: Cars 3 Is a Comeback Story About Grief, Doubt, and Growing Old 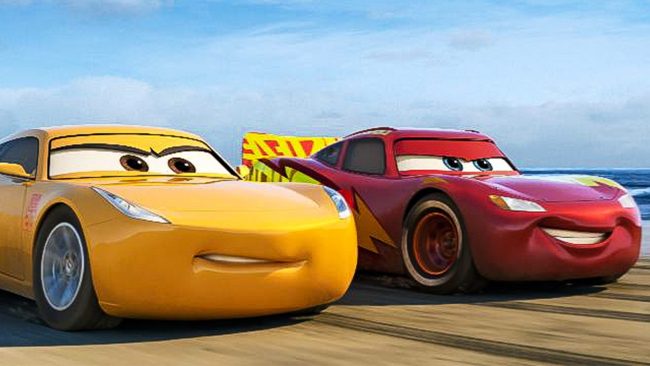 When Cars 3 was in the works, it was mostly on the sideline for adult viewers who weren’t particularly drawn in by a franchise that felt like it was more for lunchboxes and weird speculations about how the world operates. After a forgettable Cars 2, there wasn’t very particularly strong buzz for a third installment until murmurs started appearing saying that the film was actually pretty good, and a teaser that looked like it could’ve been from Ron Howard’s Rush caught our eye: wait, did we just watch Lightning McQueen die?

In some ways, this setup was perfect for the comeback story that Cars 3 tells. It begins with Lightning McQueen (Owen Wilson) at the top of his racing game, only to be faced with a new generation of racers led by a snarky and cocky Jackson Storm (Armie Hammer). As his ranking falls and other racers of his generation begin retiring, Lightning stubbornly refuses to retire on anything but his own terms–eventually leading to the devastating crash we see in the teaser. (Would this be the equivalent of seeing a real-life body? Because, that’s hella dark.)

Cars 3 follows a lot of the conventions of a comeback story, but is nonetheless enjoyable. Lightning, still mourning his mentor Doc Hudson (through unused audio recordings from the late Paul Newman) tries to practice with new equipment under the guidance of his new sponsor, Sterling (Nathan Fillion), and Cruz Ramirez (Cristela Alonzo), an energetic young trainer whose biggest struggle is self-doubt. Who would’ve thought that Cars 3 has one of the best representations of imposter syndrome in media?

The real lesson, though, comes when he returns to the real roots of racing by visiting his mentor’s old trainer named Smokey (Chris Cooper) and old racemates at a dusty old track. Because of course it does. Again, while the plot itself follows a lot of archetypes, there’s so much heart and personality to these characters. It also feels like the movie is mourning Paul Newman just as much as its characters, and I liked how much time it dedicated to their mentor-mentee relationship.

Disney•Pixar has a pretty great track record when it comes to sequels and exploring mature themes, so it’s not terribly surprising that Cars 3 approaches grief, growing older, and self-doubt in a way that’s appealing to both adults and the younger ones. The film introduces a number of new characters, with early ones like Sally and Mater appearing mostly in cameos, but this decision to not linger in the earlier films pays off.

The dynamic between Cruz and Lightning is a great one, which makes the occasionally drawn-out conventions of the comeback story feel fresher and Cars 3, to my surprise, resists one of my least favorite gendered tropes (don’t click the link unless you want a spoiler). Is it Toy Story 3 or Finding Dory? No, but it’s an effective send-off to the Cars world and a good choice for the family.