Hey Marvel! Re: Captain America—What Exactly Are You Trying to Prove Here?

When I first started reading comics, I became a hard and fast Marvel fan. The original Civil War story was the first superhero story I’d ever read, and I loved seeing how nuanced writing for superheroes could be. It wasn’t just capes and tights (although those are great, too!). Serious stories about complicated people could be told. I’m a sucker for a good anti-hero. Thing about an anti-hero, though, is that they are ultimately still a hero. So, what the hell is Marvel doing with Captain America?

Secret Empire #0 came out this week, and it’s chock-full of shenanigans and tomfuckery with regard to the hero formerly known as Steve Rogers. Now? Now, I don’t even know who this dude is anymore.

We were still reeling from last year’s big Captain America reveal. You know the one: 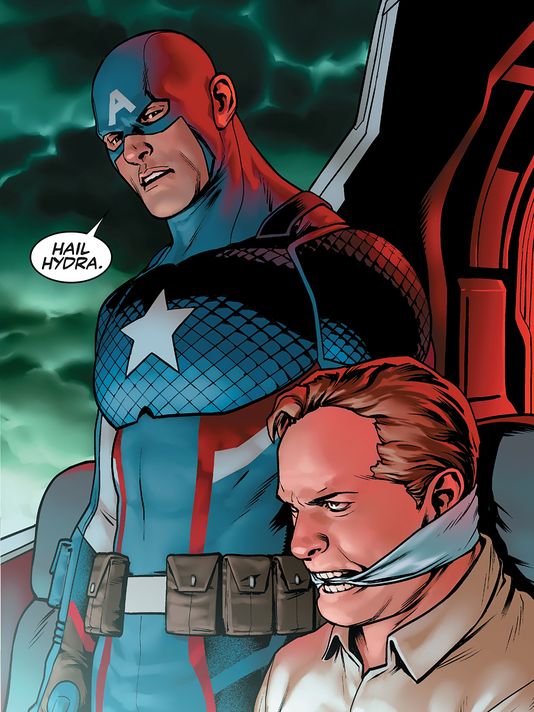 Red Skull had gotten his hands on the Cosmic Cube, Kobik, which took the form of a little girl who recalled her past with him. Red Skull then indoctrinated Kobik into believing Hydra was the answer to global happiness, which remade reality into one where Steve Rogers was recruited by Hydra as a child in the 1920s.

So, this was supposed to be a false reality manufactured by a villain, and under that construct, Steve Rogers (and others) eventually rises to the head of a group that considers themselves the “true” Hydra – not Red Skull’s demented version. Steve even kills Red Skull to assume control and usher forth the “Secret Empire” advertised with this new series.

Here’s the thing. Secret Empire opens by telling us that the manufactured reality was actually correcting another manufactured reality. Yup. Apparently, the Axis Powers won WWII for-real for real, until those pesky Allied kids themselves changed history with the Cosmic Cube. So the actual, real and true timeline … is the one where Steve Rogers was actually Hydra from the very beginning, and is actually a true believer.

Before this, an argument could’ve been made that this was merely a temporary thing through which to explore not-so-nice but important truths about America. Having a corrupted version of Captain America for a while could’ve allowed readers to see another, more sinister, racist, and fascist America; one that has always existed and seems to be seeping up from the ground beneath us faster than ever before.

But this? I have no idea what writer Nick Spencer could possibly be doing here, other than what many fans have already accused him of: ruining Captain America for mere shock value.

I mean, what are the options? Either Captain America stays this way (basically saying America is ruined forever, so fuck it), or this gets fixed with someone else using the Cosmic Cube. But how often can they keep doing that? Not only would that be craptastic writing, but at a certain point, there has to be a set reality. Characters have to have an actual core to them that withstands the influence of different writers, editors, and artists.

Captain America had a core that withstood the test of over seventy years of comics. He’s made mistakes, and his complete devotion to freedom and democracy has often landed him on the wrong side of an argument (see either version of Civil War, depending on what your personal beliefs are), but he was fundamentally decent, trustworthy, and loyal. Readers knew that even when he made mistakes, his heart was in the right place.

Spencer has now single-handedly undermined one of the few actually decent legacy characters Marvel has. Why? To prove how edgy Marvel is?

Again, I love anti-heroes. I love that Tony Stark has come through a lot of mistakes to become the hero he is. I love that most Marvel heroes have snark and edge to them, even when they’re not anti-heroes. What I also liked was the fact that Steve Rogers was a reliable bastion of decency, and there is no good reason to have that taken away.

I don’t know what Spencer’s and Marvel’s plan is here, but whatever it is, I’m sure it could’ve been accomplished without eliminating traits that are essential to an iconic character. Wanna examine how fucked-up America is, or can be? There are myriad ways to do that without turning Captain America into a whole other person.

What do you all think? Is this in any way salvageable? Will you be reading Secret Empire? I’d love to hear your thoughts below.