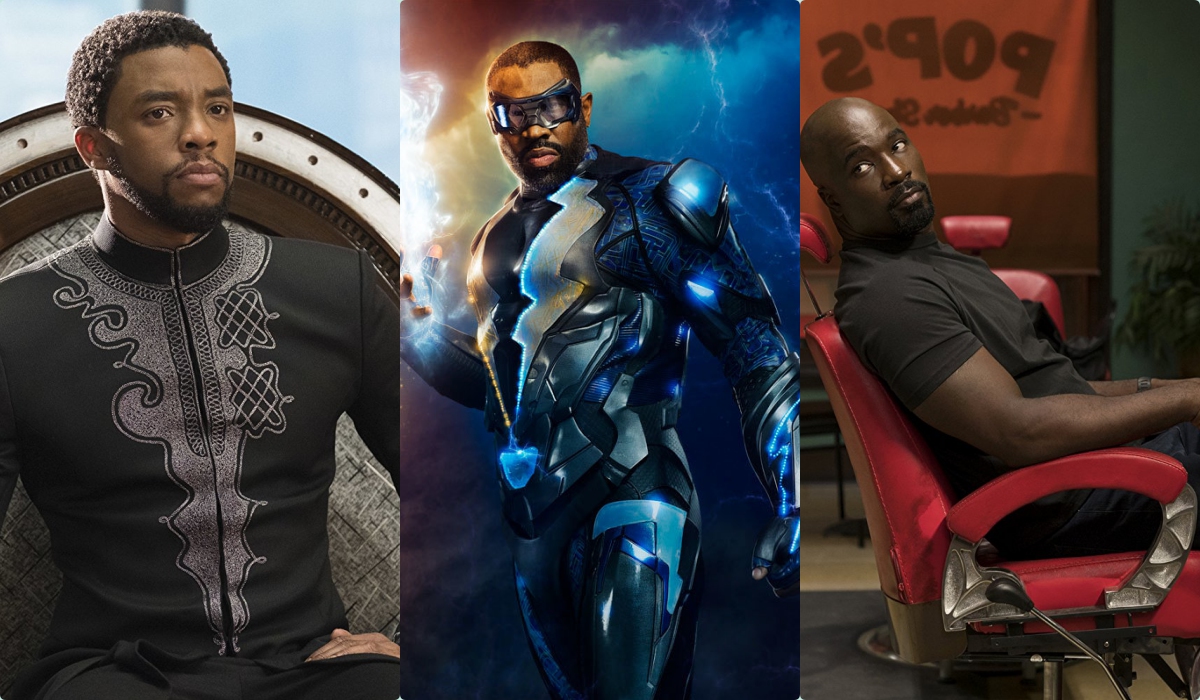 Black Panther, Luke Cage, and Black Lightning have many things in common in terms of the world that the characters entered into. At the time the characters were created, they were filling a void of black male representation in comic books, and when the characters were adapted into live-action that same void was being filled again.

It’s not a surprise that all three characters are bulletproof, dark-skinned men who work to build a better community for their people. They are a king, a teacher, and man looking to clear his name—cloaked in righteousness and respectability that makes them each both inspiring and sometimes stilted.

Respectability politics is the albatross that hangs around the next of most marginalized communities. To act the “right way” to conform to standards of excellence with double the speed of their white counterparts. With black men, the written history of this can be seen in the works of civil rights activists like W.E.B. Du Bois and Booker T. Washington. It revolves around color and class. Writer Ta-Nehisi Coates talked about in an article back in 2014 about the former basketball player-turned-sports commentator, Charles Barkley, who made the following comments:

“We as black people are never going to be successful, not because of you white people, but because of other black people. When you are black, you have to deal with so much crap in your life from other black people,” Barkley said. “For some reason we are brainwashed to think, if you’re not a thug or an idiot, you’re not black enough. If you go to school, make good grades, speak intelligent, and don’t break the law, you’re not a good black person. It’s a dirty, dark secret in the black community. There are a lot of black people who are unintelligent, who don’t have success. It’s best to knock a successful black person down because they’re intelligent, they speak well, they do well in school, and they’re successful. It’s just typical BS that goes on when you’re black, man.”

Coates describes respectability politics as “the inability to look into the cold dark void of history”: it removes all socio-economic realities from the experiences of people and instead maintains that bootstraps are the thing to help move people from poverty upward to salvation. It ignores all the things in place that do not care if a black person is educated or not, or if a black person has access to that education. It takes every marginalized person and pits them against each other, as if their oppression should all be treated as mirrors to one another, rather than examine how each thread in that ball has led those groups down the path of today.

For black people—and black men in this specific case—defending themselves, protecting their communities, protecting their women, living as “men,” was one of the ways they could end up at the end of a noose. And when it came to defining what kept the black man down, looking at black criminality—nevermind the circumstances around it—was a scapegoat for whites and blacks alike.

“It is not sufficient to say that ninety-five out of every hundred Negroes are orderly and well behaved. The ninety-five must band themselves together to restrain or suppress the vicious five,”  said black educator Kelly Miller in 1899.

It is this fear of the black criminal element that lives in all the villains in these shows. Killmonger, while technically an American soldier, is dressed and presented as being a part of the black American “street” element. The 100 gang in Black Lightning and of course the Stokes-Stryker gang in Luke Cage. All of this media has noble black men working to clean up these streets or protect their community, and while each work is aware of the larger oppression at play, they spend most of the time protecting themselves from other black bodies.

One of the black civil rights leaders who understood the fear tactics of these ideas was Ida B. Wells. She spoke about how lynching as a method to “deter crime” in the black community was really just a way keep people afraid: “An excuse to get rid of Negroes who were acquiring wealth and property and thus keep the raced down and keep the nigger terrorized.”

Despite the work done to create multi-faceted black characters in different shows, when it comes to the superhero genre, there is still that lack of nuance. The three black men whose faces and names lead their franchise are paragons of virtue. They are large dark-skinned men, who are patient, kind, thoughtful, respectful to their women and work to undermine all the tropes of the scary black man. That is without a doubt an amazing thing in terms of representation.

However, this is both a blessing and a curse.  They are sometimes so confined by having to be saviors that they so rarely are allowed to fun or to have nuanced flaws or to be angry. Luke Cage can’t be a bloodthirsty vigilante like Frank Castle. T’Challa can’t be a ladies man or have issues with narcotics like Tony Stark. Jefferson can’t be a total irresponsible jerk like Oliver Queen. They have a higher calling. They have to inspire all black people and be everything the “black man” is supposed to be.

Which is an unfair burden to place on them, because it’s an unfair burden to place on black men or any other marginalized person. As a black woman, I understand why Luke Cage in the world he would exist in today can’t be a hero for hire, who looks out for himself. He has to be a paragon of virtue. The black man framed for a crime, rather than be an actual criminal who has to redeem himself by protecting his city.

I’m glad that T’Challa, Luke, and Jefferson exist. I love them. They are excellent characters, and while some may call them boring, I am also a fan of their quiet strength, empathy, and goodness. I love having them as characters young black boys can look up to. Plus, they are joined by some amazingly powerful and compelling black female characters.

But not all black and other marginalized heroes need to tick every box of “goodness.” Especially when in the media, the news is so quick to use any “criminal history” to remove any kind of empathy or outrage about the shooting of an unarmed black person.

Part of what I remember really loving about Xena: Warrior Princess as a kid was that Xena was on a redemption journey to which she knew there was no end. That she could never fully make up for being a warlord, but she was going to try anyway. That facing her demons and, even sometimes, her punishment was necessary. Same with Bo Dennis in Lost Girl—part of her being a succubus was that she killed a lot of people by accident. Her desire to do good was built upon her making up for that. It didn’t stop them from being heroes.

That a space that black and brown heroes need to be able to occupy. We need the room to be anti-heroes, villains, and everything in between.