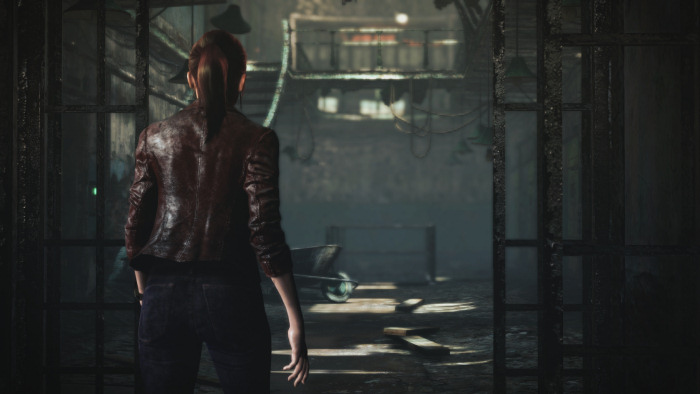 Revelations is supposed to bridge the two phases in Resident Evil’s history: the “classic” survival-horror style, with long mansion hallways and tricky puzzles, and the newer breed, where zombies move fast and bioengineered monsters grow gigantic pus sacs from every orifice.

But all Resident Evil: Revelations 2 does is make me wish we could turn back the clock 20 years—that the good old days are still possible to relive. They’re not.

Split into a series of four episodes, Revelations 2 takes place on an island where Claire Redfield and Moira, the new kid in the anti-bioterrorism group called Terra Save, find themselves held captive after an office party goes horribly wrong (and no, it wasn’t because somebody invited “that guy”). They have to find a way to escape, and that means locating “the Overseer,” a crazy woman who communicates with them via special wristbands they wake up wearing.

The other half of your time is spent playing as S.T.A.R.S. veteran Barry Burton, who reaches the island after receiving a distress signal from Moira, his daughter. Months behind on their trail, he tracks them down with the help of a mysterious little girl with psychic powers named Natalia. And in a way, the story ends up being more hers than anyone else’s. 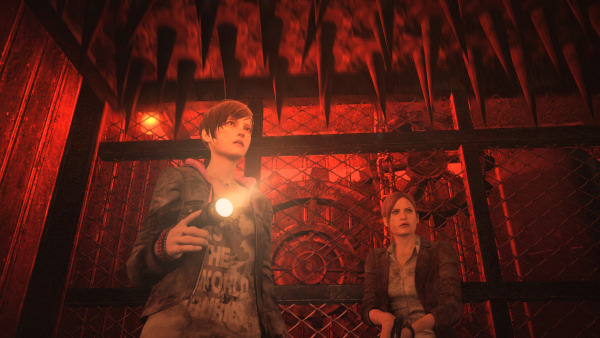 While it’s great to see fan favorites Claire and Barry back again, their partners leave a little to be desired. The game might as well be subtitled “Dumbest Co-Op Ever,” or at least the most incongruous, because while Claire and Barry get to handle the big guns, Moira’s stuck with a crowbar and a flashlight, and all Natalia gets is a stinking brick.

Yes. A brick. That thing you build houses with.

Granted, Moira’s flashlight can temporarily blind enemies or even burn ones whose pus sacs (ew, sorry to write that) are large enough to be vulnerable to its heat, so she’s not useless. Moira can disable or stun them while Claire nails them with a headshot or a kick to the chest, and then Moira can stab them with her crowbar when they’re down. In one particular boss fight, that kind of team-up is absolutely crucial (although it was one of the slowest, longest boss fights I’ve endured, but anyway).

Likewise, Natalia can sense enemies through walls and even identify their weak points, which is helpful in situations where you’d otherwise need to blast away at their limbs to expose those vulnerabilities. 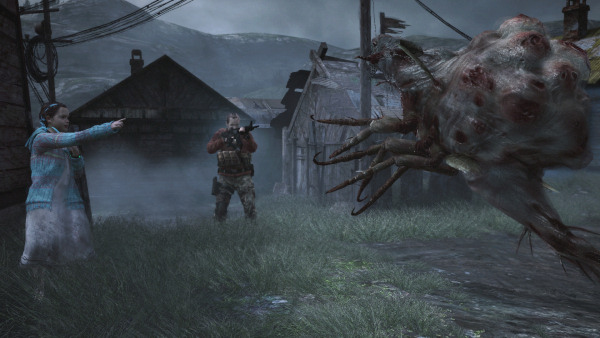 This imbalance between characters makes for a weird single-player experience and an annoying multiplayer experience. In single-player, you’d think you’d want to spend most of your time as Barry or Claire since they get to do all the fun stuff (ie., shoot zombies), but it’s sometimes more useful to play as Moira or Natalia even though they’re less able to defend themselves. Both can find secret items flashing in the environment, which sounds a “ding” which breaks your immersion but, hey, gets you another green herb or extra ammo. Moira aims at these items by concentrating the beam of her flashlight, but Natalia literally points at stuff with her finger. It’s the silliest thing I’ve ever seen.

Revelations 2 also rewards you for playing as Moira and Natalia rather than the lead characters. Finding hidden gems and other treasures earns you Bonus Points (BP), which you can redeem on the skill tree to unlock and level up special abilities, such as knifing while dashing, faster healing, or better evasiveness. One of these skills enables A.I. Barry and Claire to use their weapons without depleting your ammo supplies, which means by playing as Moira and Natalia, you can conserve ammunition while collecting more. I don’t really understand why. It seems counterintuitive to the idea of survival horror. Wouldn’t the game want me to take charge and put myself in danger as the characters with the guns?

If you try to play the campaign just as Barry or Claire, it’s a lot more difficult. You don’t have a lot of ammo or health items to work with, so you have to be careful in rationing them. That’s what Resident Evil is supposed to be about. But to not be able to find hidden items in the environment while playing as them means you’re going to miss out on a lot. 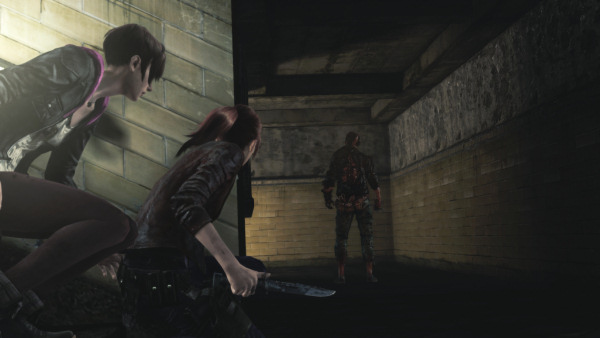 The A.I. is smarter than what we’ve seen in previous Resident Evils, but it’s still not amazing: Firepower is lessened, and oftentimes the characters won’t react at all to enemies standing right before them. You can command your partner to follow or wait, but I’ve encountered areas where they haven’t listened or have flat-out refused to budge even though nothing was blocking their way. They’ve even stood in a fog of poisonous gas, choking to death, when they could easily get to safety. Still, the A.I. is decent enough that you can let the computer do a good amount of the work, but I wouldn’t recommend depending on it when fighting bosses or particularly tough monsters.

You can switch between characters easily, but you can also invite a friend to play split-screen. I’m all for more local co-op games. They keep disappearing in favor of strictly online play. So kudos to Capcom for keeping it around.

Having a friend take over Moira isn’t so bad, but it’s much less fun when Natalia is involved. Unless your friend can control themselves (unlike my boyfriend), your partner will point at everything in sight just to irritate you, which causes Natalia to repeatedly say, “The monsters are coming!” “The monster!” Sigh. It’s bad to think about shotgunning little girls, right? Right.