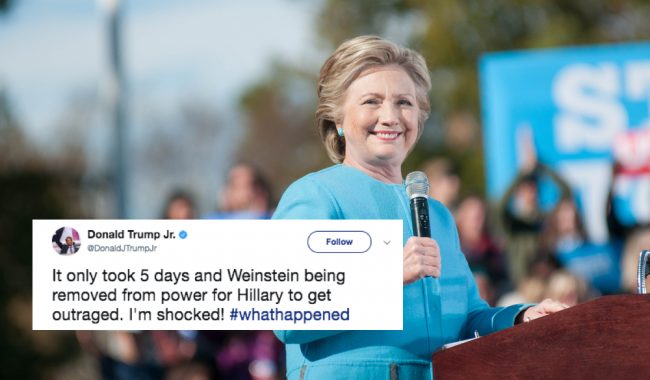 On Tuesday, former Democratic nominee (and first woman to win the popular vote of a U.S. presidential election) Hillary Clinton issued a formal public response to sexual abuse allegations against Harvey Weinstein. According to reports from last week by the New York Times and, this week, by the New Yorker, over the years, Weinstein has harassed, assaulted and even raped a number of women in Hollywood.

“I was shocked and appalled by the revelations about Harvey Weinstein,” Clinton said in a statement posted to Twitter. “The behavior described by women coming forward cannot be tolerated. Their courage and the support of others is critical in helping to stop this kind of behavior.”

Clinton’s response follows days of aggressively snide comments from the right, who have rallied behind Donald Trump, Jr. — suddenly a proponent of the “liberal,” “fake news” Times now that it’s published a report that can be used against Democrats — to call out the “hypocrisy” of any and every left-leaning celebrity who’s ever made a comment on politics if they have yet to formally challenge Weinstein to a duel.

The National Republican Congressional Committee has called on its Democratic counterpart to return all money from Weinstein, saying in a statement that “the DCCC’s silence is unconscionable and they cannot excuse years of abuse by one of their donors.”

Members of the Republican party — the same party of the oh-so pro-woman “legitimate rape” theory, and the same party that routinely tries to pass legislation to allow the government to force women to give birth — are suddenly, conveniently interested in women’s safety and dignity.

After a decades-long, shameless War on Women that’s decimated reproductive health care access, and fought rape kit legislation and wage equity, they are suddenly posturing as the party of trusting women, the party that nobly speaks up about women’s abuse and oppression while the other side allies with women’s abusers and oppressors.

And if you’re puzzled by this sudden 180, the answer lies in Weinstein’s status as a decades-long Democratic party donor. Weinstein has fundraised for and donated to the campaigns of Senators Barbara Boxer, Elizabeth Warren, Chuck Schumer, and others, including even Clinton herself and former President Obama.

People: Hillary should just be quiet and go away.

THOSE SAME PEOPLE: Where’s Hillary’s statement on this? Her silence is deafening.

The witch-hunt against Democrats who neglect to comment on Weinstein is being spearheaded by Trump, Jr. — the son of a man who has admitted on tape to nonconsensually groping women and has more than a dozen sexual abuse accusations against him. As much as Trump, Jr. and others on the right would like to shrug this off as irrelevant to Weinstein, Trump, Jr.’s vocal response to the Weinstein scandal really only makes these facts more relevant.

Because, after all, if your concern for women who have experienced sexual harassment, intimidation, and assault is contingent on the political leaning of the perpetrator, your concern certainly isn’t with women’s rights.

Like so many other high-profile cases alleging sexual harassment by wealthy and powerful men, Harvey Weinstein’s case is fundamentally about whether we as a society trust women and care about their experiences. The issue of women and sexual abuse tends to be three-pronged — stigma, cultural pressures, and fear of blame and shame can steer women toward not reporting at all; sexist demands for women who report their experiences to have seamless narratives and virginal backgrounds can impede on them ever receiving justice; and as we’ve seen with the likes of Stanford rapist Brock Turner and, until recently, Harvey Weinstein, the trivialization and dismissiveness of sexual abuse can allow male assailants to carry on unscathed. This is an issue that transcends party politics.

The Weinstein incident does not justify Republicans claiming moral superiority because Weinstein’s actions represent not the Democratic party, but rather, represent a toxic trend in patriarchal society at large. The Democratic party may, indeed, have its own share of problems with women’s rights, apparent in party leadership’s moves to be inclusive of anti-choice Democratic candidates as if women’s bodily autonomy is something that can be compromised on for political gain.

But as problematic as House Minority Leader Nancy Pelosi, DNC chair Tom Perez, California Gov. Jerry Brown, and other prominent Democrats have come to be about entrusting women with abortion rights, I still cringe at false equivalence between the two parties when it comes to the issue of trusting women and responding to sexual assault.

It took Hillary abt 5 minutes to blame NRA for madman’s rampage, but 5 days to sorta-kinda blame Harvey Weinstein 4 his sexually assaults.

As if the sheer joy and smugness of the likes of Trump, Jr. and the opportunism of the Republican Congressional Committee (I mean, how could anyone who actually, sincerely sympathizes with women be this pleased with reports of their suffering and oppression?) didn’t make the truth of their intentions abundantly clear, no matter what they say in words, their policies around workplace equality and harassment cases, sexual assault, and reproductive rights speak volumes.

The Republican party is not the party of trusting women. And if anything, if the assailant isn’t a Democratic donor, according to our nation’s Republican president, harassment is the fault of women.

Last year, then-presidential candidate Trump said that he “would like to think [Ivanka] would find another career or find another company” if she were subjected to sexual harassment. Ivanka’s brother, Eric Trump, said that “strong, powerful women … wouldn’t allow” themselves to be sexually harassed. The problem, in their eyes, isn’t men like Harvey Weinstein — it’s weak women who don’t stand up for themselves or just find new work. And in Ivanka “champion for working women” Trump’s humble view, women who complain of sexual harassment just need to learn how to take a joke, the first daughter said in her 2009 book, The Trump Card.

. @KellyannePolls continues her criticism of @HillaryClinton 4 Weinstein. When’ll she condemn her BOSS she enables? https://t.co/yqPgvdD5Xy

Earlier this year, Texas Republicans took their party’s core belief that women cannot be trusted to make their own bodily decisions a step further by mandating that Texas women buy separate insurance plans in advance if they want coverage for abortions — even if their unintended pregnancies are the result of rape. In passing this legislation, the clear message by Texas Republicans is that rape and pregnancy by rape are things that women can prevent with certain behaviors, that it’s their fault if they’re subjected to this.

In March last year, Georgia Republicans blocked Democratic efforts to require law enforcement to test rape kits and keep track of neglected sexual assault evidence. Similarly, in 2013, members of the House GOP blocked bipartisan legislation that would have allocated more funding to rape kit testing. And in response to the epidemic of campus sexual assault being watered down by under-reporting and lack of action to support survivors, Trump-appointed education secretary Betsy DeVos determined the solution ought to be to equate survivors with their assailants and roll back additional Obama-era policies that arguably didn’t even go far enough to protect survivors.

Weird, Hillary has been really quiet about Harvey Weinstein. You would think she would be all Over this. #WhatHappened?

Clinton’s response to the Weinstein allegations comes after days of attacks from conservatives, but it would be a mistake to attribute her statement to these attacks. In the past two years alone, men have called Clinton a “c-nt,” and speculated into her appearance, health and bodily fitness for the office of the presidency. To demand a woman who has experienced sexist bullying and intimidation firsthand to comment on this issue — an issue that she has, for years, prioritized in her words and policies — as if it is some foreign topic she’s never heard of, is the absolute height of male privilege and the ignorance that stems from it.

The media’s incessant need to make @HarveyWeinstein about @HillaryClinton is part of the reason there is a sexual predator in the WH today.

Just as they were in response to last year’s notorious Access Hollywood tape, on Harvey Weinstein, Democrats and left-leaning celebrities have been vocal and objective. In contrast, however vocal Republicans might be about a case of misogyny and abuse that reflects negatively on their political opponents, the man who occupies the office of the presidency and the vast role played by the members of his party in getting him there is deafening.