Republicans Are Being Absolute Babies Over New Metal Detectors in Congress

Apologies to actual babies for the comparison. 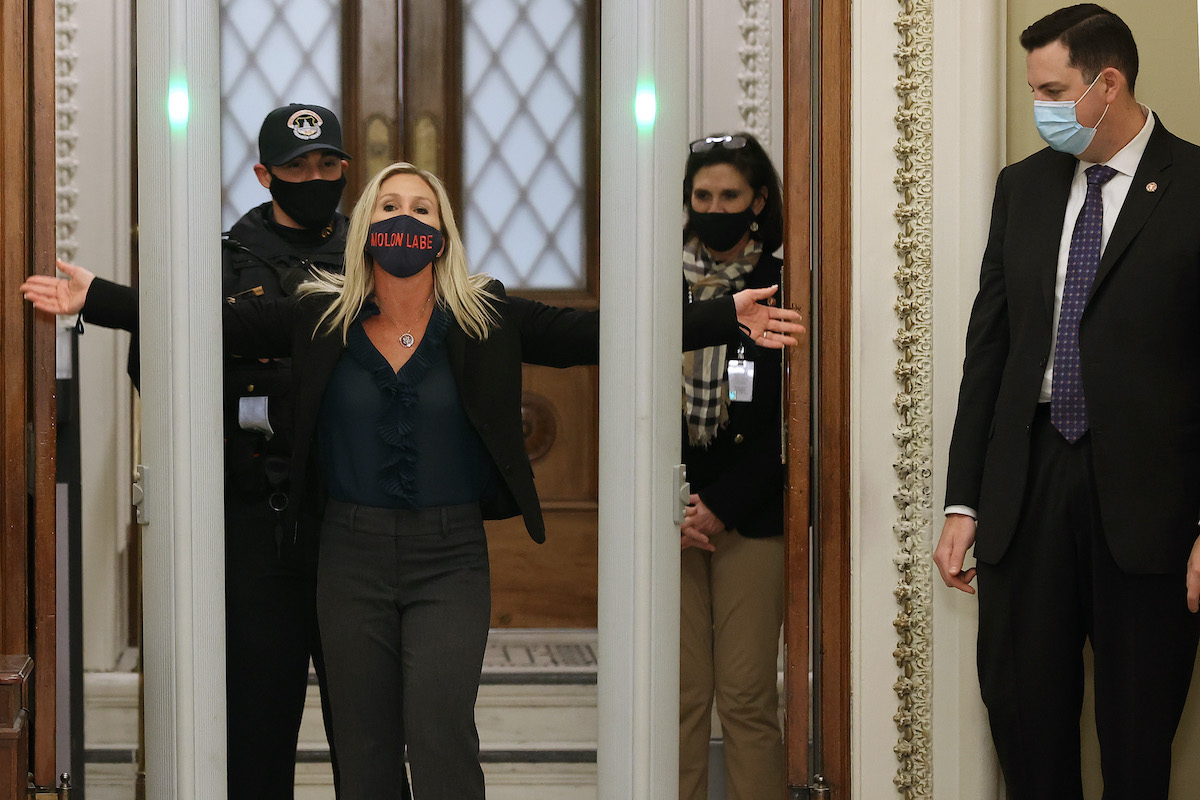 Following last week’s attack on the U.S. Capitol building, metal detectors have been installed outside the House chambers so that everyone—including lawmakers—have to pass through them to get to the floor. I think that to most of us, that seems like a perfectly reasonable and perhaps overdue precaution. And yet a bunch of Republican members of Congress saw that protection as somehow trampling their civil liberties and decided to throw a fit Tuesday evening on their way to a House vote.

Based on information from reporters on the scene, it appears to have started with newly-elected full-blown QAnon Congresswoman Lauren Boebert, who refused to allow security guards to check her bag.

Lauren Boebert is refusing to comply with the metal detector or allow a bag search. Now standing in the House doorway. Security is refusing to allow her to enter. Appears to be a standstill.

Boebert, who owns a gun-themed restaurant in Colorado where the servers open carry, released a digital ad the day she was sworn in declaring that she planned to bring her gun into Congress. She also stated her unequivocal support for the rioters last week just prior to their storming of the Capitol, and after they’d breached the building, while lawmakers were sheltering inside, she tweeted about Nancy Pelosi’s evacuation, despite explicit instructions not to reveal anything about their locations on social media.

What I’m saying is that even though the metal detectors and the bag checks were precautions applied to everyone equally, they probably should have been applied to Boebert a little more equally.

Instead, Boebert refused to open her bag or walk through the metal detector and Capitol police refused to let her in, leading to a “standstill.”

Other Republicans soon joined her, either loudly complaining about the very basic new security precautions or flat-out refusing to comply with them.

Rep. Steve Stivers (R-Ohio) just told the cops at the door he believes the magnetometers are unconstitutional.

Just watched about 10 Republicans walk around the magnetometer.

Didn’t see them all, but among the group was Ralph Northham and Scott Perry.

Jeff Duncan bypassed the metal detector right before them.

House GOP furious at new mags outside the chamber. Reps. Markwayne Mullin and Steve Womack erupted at Capitol Police as they were forced to go through the mags. Womack shouted “I was physically restrained!” And Mullin said “it’s my constitutional right” and “they cannot stop me

Rep. Marjorie Taylor Greene, seen in that header photo up top, showed up in a mask reading “Molon Labe,” meaning “come and take [them],” which certainly is a choice a week after a violent mob stormed the Capitol building.

Anyone who’d use a government platform *right now* for trolling and signaling about weapons has gotta go.

As many have noted, it’s pretty strange to see lawmakers declare metal detectors “unconstitutional” when American schoolchildren have been made to walk through them daily for decades. (Not to mention everyone who wants to get on an airplane.)

Just had to go through a metal detector before entering the House floor. Some colleagues are frustrated (guess which ones) by this requirement. Now they know how HS students in my district feel. Suck it up buttercups. Y’all brought this on yourselves.

Those reports from Tuesday night show that the Capitol police didn’t know how to deal with Republicans refusing to comply. But if you thought they might have regrouped and figured out a game plan going into today, you’d be mistaken! This is strange, considering it’s not like they’ve never arrested sitting lawmakers before.

But once again, Boebert and many others chose once again to walk right past the metal detectors.

Boebert just walked through the mag, set it off and ignored the cop who asked to wand her down

another member just walked through, set it off and ignored the cops trying to wand him down. it seems the Republicans are walking through the mags today but they’re just ignoring the cops here to do their job

Hmm, strange to see the “law and order,” “blue lives matter” party suddenly show such disregard for police officers, no? It’s almost like their performative principles were never meant to apply to themselves.

As an aside, Russ Fulcher was the most aggressive member pushing through the metal detectors last night.

A female officer kind of got in his way—I think inadvertently—and he really was…assertive.

The cop didn’t want to talk, but she almost seemed on the verge of tears after.

GOP: Blue Lives Matter, we must respect our great police

There’s so much to be angry about here—the hypocrisy, the entitlement, the cruel disregard for their colleagues’ safety.

Freshman Congresswoman Cori Bush lays it out the best though.

To my colleagues who won’t go through the metal detectors:

Have you ever had a job before? If you work at McDonald’s and you don’t wear the uniform, you don’t work that day.

If you won’t abide by the rules of this job, go find another one 👋🏾 https://t.co/rPO2xek1iB

“We’re talking about your job,” she told MSNBC’s Chris Hayes. “If you work at McDonald’s, you have to wear the uniform or you’re not working today. … Have they ever had a job before?”

I think in most cases, we know the answer to that.