Republicans Are Just Straight-Up Rewriting History in This Senate Hearing 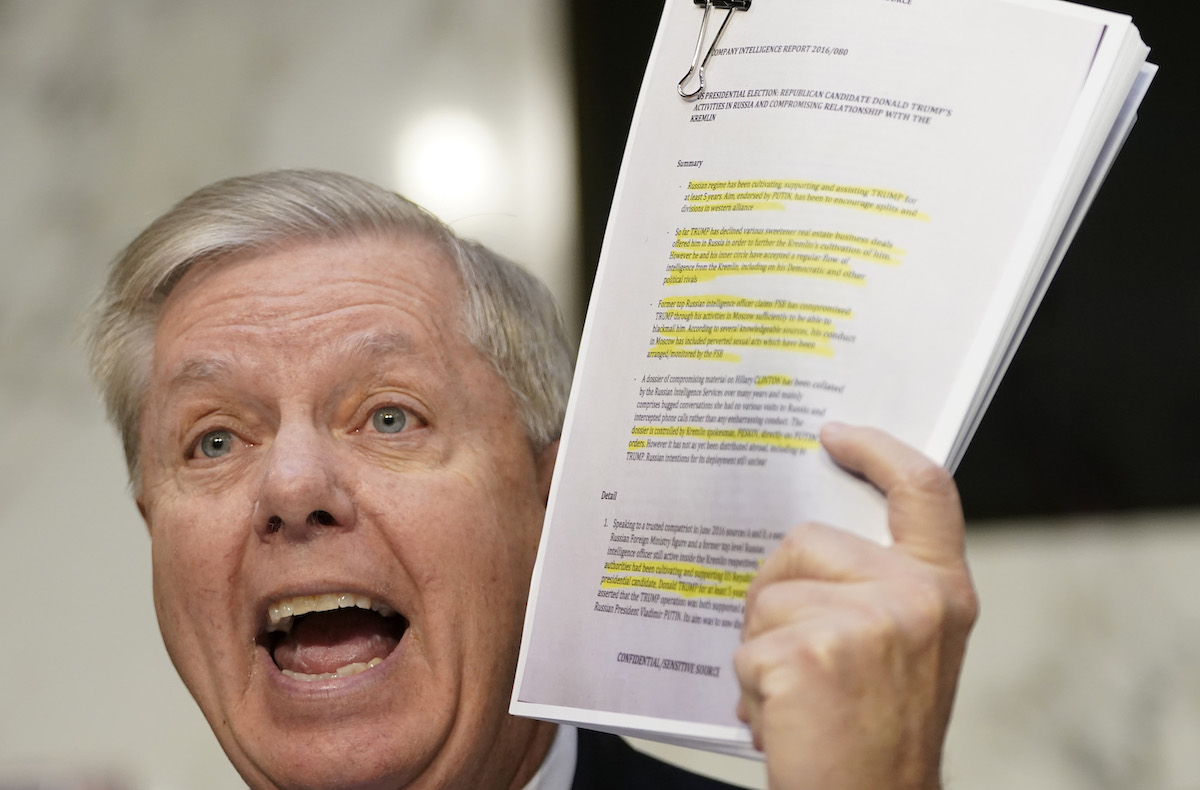 The Senate Judiciary Committee held a hearing Wednesday on Justice Department inspector general Michael Horowitz’s investigative report into possible ties between Donald Trump’s presidential campaign and Russian election interference. And as big of a circus as the House impeachment hearings had become, this might have been worse.

Republican chairman Lindsey Graham started things off with a lengthy rant full of straight-up lies. He decried the “deep state” conspiracy against Trump and “the golden shower … the sexual encounter that President Trump supposedly had in a Ritz-Carlton Hotel in Russia” that appeared in Christopher Steele’s dossier, and he did so in the loudest tone of voice he could manage.

Lindsey Graham screaming at the #senatehearing reminds me of this quote:

Graham also put forth a new lie: that the FBI was “able to stop” the Russian interference into the 2016 election. I’m not sure where he got that story from but it wasn’t our shared reality.

Lindsey Graham begins the Horowitz hearing by claiming the FBI was “able to stop” the Russian interference campaign against the Clinton campaign. That’s a lie. pic.twitter.com/fHIT9lQ6Hv

The only lie Graham seemed willing to refute rather than perpetuate was the “CrowdStrike” conspiracy theory that it was Ukraine and not Russia that interfered with the 2016 election. “I’m 1,000% confident that the hack of the DNC was by Russian operatives, no one else,” he said, displaying just the very bare minimum amount of acceptable cognizance for public existence, let alone public service.

But there were plenty of others willing to supply their own bizarre lies. Like my own personal terrible Senator Josh Hawley.

If this were true, then FBI agents would’ve leaked about the Trump investigation before the 2016 election, when doing so could’ve prevented him from becoming president. But they didn’t. Instead, Trump benefitted from damaging leaks about the Clinton investigation. Case closed. https://t.co/2oe04NwcIL

Ted Cruz starts screaming a lie about spies in the Trump campaign during #SenateHearing pic.twitter.com/PhXhlpUJpt

The entire thing was a farce.

I’ve said it before, but as @tedcruz is speaking, I feel compelled to repeat myself: If we’re going to put witnesses under oath, we should swear in lawmakers too. The amount of lying Republicans do in these hearings with 0 consequence is shameful and dangerous. #SenateHearing

The lies weren’t coming just from the Senate. They’re getting plenty of spin from the rightwing media, too:

The media denies this because

2) the warrant wasn’t to spy on the campaign (it was to surveil a former campaign adviser).

And also from Trump’s own Attorney General. William Barr gave an interview to NBC this week in which he totally disregards the work done by the FBI to investigate Trump.

He calls the investigation and the subsequent reports that have come out of it a “completely bogus narrative that was largely fanned and hyped by an irresponsible press.” He makes it clear that he doesn’t agree with the basic legitimacy of the entire investigation, refusing to acknowledge that it was based in existing knowledge of Russian meddling. Instead, he says the entire investigation was done in “bad faith,” calling it “very flimsy” and lacking in “sufficient predication.”

But the valid predication of this investigation is pretty much the whole core of the Horowitz report. As CNN’s Chris Cillizza puts it, “That’s like saying you like everything at McDonald’s except the fried food.”

I keep thinking about this quote and then think about how many stories were written by myself and my colleagues as well as our competitors that were directly cited in the Special Counsel’s report as being factual and relevant: https://t.co/MMCdyzf9hX

Barr also echoes Graham in saying Russia “attempted” to interfere in our election but not that they succeeded. Basically, he said everything possible to support Trump’s constant revisions of our recent history. And he wonders why people say he acts more like Trump’s personal lawyer than the Attorney General. (JK, he doesn’t ask; he knows why.)

At least his conduct is not going unnoticed.

Horowitz said he would support legislation passed unanimously in the House that would allow him to do so.