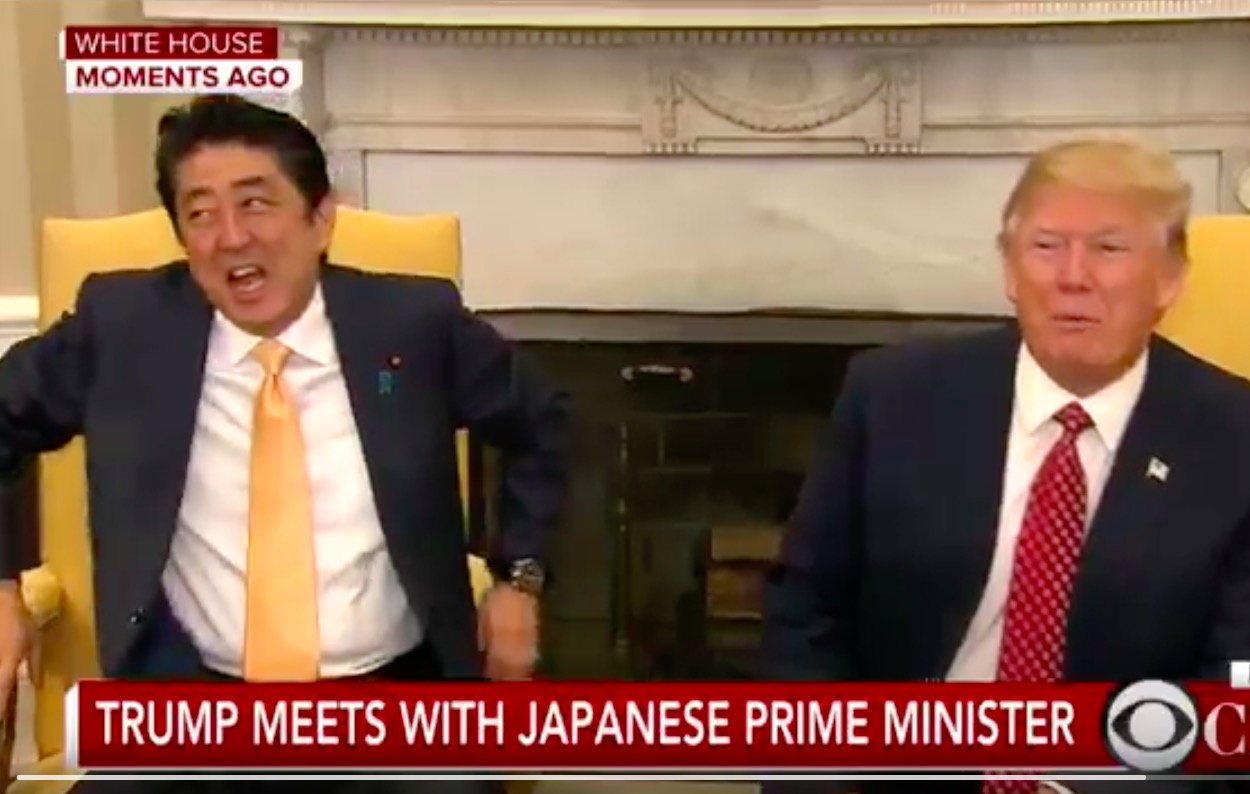 Republicans were guaranteed to be in for plenty of embarrassment as soon as their party selected a sentient “red pill” message board thread masquerading around in a human suit as its nominee, but it would’ve been hard for anyone to foresee the full scope of the litany of absurdities that have followed. This weekend alone held enough for an entire four years, so we’ll break it down.

Let’s get warmed up with the smaller, funnier ones and work our way up to the national security-shaking, fascist ones, shall we?

As we covered over the weekend, the Republican National Committee’s official Twitter account celebrated Abraham Lincoln’s birthday by tweeting out an inspiring Lincoln quote—in the way that it inspired the Internet to write in their own hilarious quotes, because the one used in the GOP’s tweet did not actually come from Abraham Lincoln. Well done, “party of Lincoln.” Meanwhile, the Department of Education, which recently saw Education Secretary Betsy DeVos immediately open herself up to mockery after her embattled confirmation, misspelled W.E.B. Du Bois’ name in a tweet and then also misspelled their initial apology. At least they’ve clearly made their case that our education system needs some work. Trump’s official inauguration poster also contains a fairly noticeable typo.

Trump also met with Japan’s Prime Minister, Shinzō Abe, this weekend. They held a joint press conference, during which Abe prevented Trump from cutting things short by at least allowing a second question from a Japanese news outlet to match the two Trump had given to American ones (The New York Post and Fox Business). It also seems that Trump wasn’t wearing his translation earpiece during Abe’s planned remarks and was just nodding along, although he’d apparently already read them. They also shared a fairly awkward handshake and an eye roll:

Then, there was the matter of Republican Town Hall meetings that didn’t look very good for the GOP—seriously, one featured booing at the mention of the thoroughly false, incredibly tired “death panels” claim against the Affordable Care Act, with a Florida county GOP exec calling the crowd “children”:

BREAKING VIDEO: At a Town Hall event, Congressman tells his constituents to “be quiet, children”. https://t.co/yfyRcBhBq7

Senate Majority Leader Mitch McConnell had to take an alternate route to escape an airport without confronting protesters only to find they’d showed up at his house. This resulted in Jason Chaffetz, a Tea Party-backed Republican House member, suddenly deciding, after protests at his own Town Hall, that public outcry is fake, since it’s not on his side. The claim itself is ludicrous enough, but former Bush Press Secretary Ari Fleischer took things a step further by falling for a hoax “paid protest site” and then half-admitting his mistake while making no effort to remove his original misinformation tweet.

There’s also the Republican infighting still surrounding Trump, with Al Franken saying that some of his Republican colleagues in the United States Senate have concerns about Trump’s mental health. In addition, new, unfounded voter fraud allegations came out of the Trump team from advisor Stephen Miller, this time targeting New Hampshire and asserting that voters were bussed in from out of state to cost Donald Trump a victory there. Again, voter fraud claims are baseless and are only used to promote voter suppression, and Republicans outside of Trump’s team have already spoken against them, with an advisor to Republican governor and Trump primary opponent John Kasich calling them out this time around.

Trump also spread more of his trademark outright lies on Twitter, claiming that protesters as he left his Mar-a-Lago resort were actually massive crowds of supporters that the media wasn’t covering. Not only that, but he got into a beef with Mark Cuban for reasons even Mark Cuban doesn’t understand, but let’s not let that overshadow Trump’s lie that Cuban supported him when Cuban actually endorsed Hillary Clinton and called Trump “batshit crazy.“All lies matter.

While all of this nonsense was going down, Trump advisor Stephen Miller was hitting the morning shows to represent his boss, and things took a sharp turn toward the authoritarian in discussing Trump’s Muslim ban and immigration actions:

If this statement and the tyrannical mindset behind it doesn’t concern you, WAKE UP. #StephenMiller who was mentored by a white supremacist and was plucked for this gig as trump policy advisor from the office of #JeffersonBeauregardSessionsIII is the new public face of the Bannon presidency. Be vigilant. #Resist #Persist #Protest ✊

If this doesn’t rattle any remaining complacency you might have about what’s happening, remember that Stephen Bannon has called Trump a “blunt instrument” and said, “I don’t know whether he really gets it or not.” Bannon has made no secret of the fact that he saw the darker elements of Trump’s rise, latched onto them, and intends on following through on them, whether or not Donald Trump himself is really interested in that or was just saying things that people seemed to want to hear.

That didn’t help ease any concerns about what was going on with the Immigration and Customs Enforcement raids over the weekend. Officials said their actions were routine, but valid concerns have been raised, which the current administration’s past comments and current lack of moderation have done nothing to assuage. (Contrary to popular belief, non-citizens do have rights, and helpful information has been going around social media.)

Of course, Trump tweeted that he was pleased with how Miller represented him. Someone who hasn’t represented Trump well—or maybe inadvertently has—is National Security Advisor Michael Flynn, who has come under fire for talking to Russia about lifting sanctions before Trump was sworn in, which is illegal, and then trying to cover it up. With the truth now out, it’s still unknown what consequences, if any, Flynn will face, and it’s hard to say who was consciously helping the coverup and who was just acting honestly on Flynn’s word, since Vice President Mike Pence previously denied Flynn’s actions. Trump said he hadn’t even heard what was going on with Flynn, and I’m not too comforted by the fact that I actually believe him.

All of that finally brings us to what actually happened on Trump’s weekend with Shinzō Abe at Mar-a-Lago. You may have heard that North Korea launched a missile test this weekend. While reporters were penned in a room with blacked out windows for Trump’s golf outing,

Our view of Trump’s Jupiter golf course from the pool hold. pic.twitter.com/VCtTIJaSLQ

dinner saw plenty of people—though not from the media—with access to the president as he received national security information and made plans with his team.

“Trump ran a campaign based on intelligence security” is a bad premise but holy cow this post https://t.co/6h1psYm7a1 pic.twitter.com/PPSiPXvJwc

Trump staffers also used smartphone flashlights to illuminate documents in the darkened dining room, which is a terrible idea, considering that feeds from such cameras can be viewed remotely by hackers. And then, um, there was this:

How was your weekend?