Arizona Seems to Think Abortion Is the Same as Giving Birth. (It’s Not.) 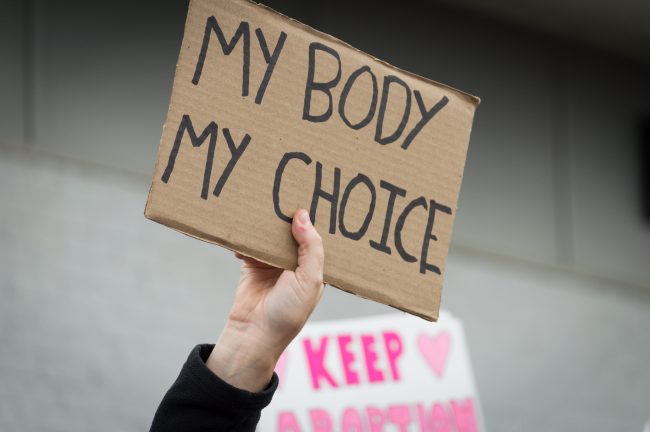 This week, amid fears that the Trump administration would launch our nation into an apocalyptic nuclear war with North Korea, it was pretty difficult to pay attention to much else. Would a temperate, mature adult woman — namely Hillary Clinton — have gotten us into this mess? Probably not. But then again, she probably wouldn’t have issued an executive order to ban global organizations receiving federal funding from teaching young women about their reproductive rights, nor signed into law a bill allowing states to defund family planning organizations that offer abortion services, either.

Anyway, other than taking one step closer to what now almost feels like an inevitable World War III, here’s what you may have missed this week in the world of reproductive rights:

Arizona seems to think abortion is the same as giving birth. (It’s not.)

In what can really only be interpreted as a delightful reminder that Texas isn’t the only state with awful laws around abortion, a new law in Arizona transparently meant to further shame doctors and women went into effect on Wednesday.

According to the Arizona Daily Sun, the law provides a new, broad definition of fetuses “delivered alive” during abortions, and establishes stringent requirements for doctors who would hypothetically have to deal with this:

“That covers any fetus or embryo, no matter how premature, who shows breathing, a heartbeat, umbilical cord pulsation or ‘definite movement of voluntary muscles,’” the report states, and continues: “At that point, medical professionals must do everything possible to keep the baby alive. A separate provision says any clinic that does abortions on women beyond the 20th week of pregnancy must have someone available with neonatal skills to care for the child if born alive.”

For the most part, the law is little more than an unsavory hypothetical. Data from the Centers for Disease Control and Prevention in 2013 reveals abortions past eight and 13 weeks are rare: Sixty-six percent of abortions take place before the eight-week mark, and 92 percent before 13 weeks. Planned Parenthood, widely demonized by the right as the nation’s premiere “abortion business” doesn’t perform abortions past 20 weeks.

The Cut reports that doctors who have testified against similar laws in Texas and other states say the “standard practice is to ‘provide comfort’ for the fetus and the mother, and that it would be ‘cruel’ to operate on a fetus if its life can’t be saved.”

Really, the law is little more than a ploy by anti-choice activists to humanize and portray fetuses as victims, and portray abortion providers and women as murderers.

Just days after California Gov. Jerry Brown came out suggesting that abortion rights should not be a “litmus test” for Democratic candidates, joining Nancy Pelosi, Tom Perez, Bernie Sanders and other leading Democrats on the issue, Wendy Davis, the former Texas senator who famously led an epically long filibuster to fight an anti-abortion law, spoke with Elite Daily.

“I have no problem with the Democratic party getting behind someone whose personal beliefs are at odds with abortion,” she said. “What I have a problem with is when a person allows their personal belief to interfere with a woman’s right to make private decision about her own bodily liberty and autonomy for herself. That’s where I would draw the line.”

Which is pretty reasonable. There’s a big difference between having personal reservations about the procedure and wanting to shape the laws that dictate other women’s lives based on those personal reservations. But that being said, with anti-abortion restrictions — and with them, maternal mortality rates — at an all time high across the country, there’s also a pretty big difference between being complacent about women’s right to access the procedure, and being proactive about protecting and expanding this right.

Still, Davis offered some important insight about why abortion is about more than “identity politics” —

“Without [access to reproductive health care], we can’t truly have economic equality for women. We cannot truly have a world where women have the same opportunities as men,” Davis said. “If we don’t recognize that the failure to support the right to abortion means the failure to support women’s equal opportunity in the world, we’re missing something.”

Rape survivors in Texas prepare to pay for their own abortions

Previously on “The Week in Reproductive Justice,” we looked at a bill in Texas requiring women to pay a separate premium on their health insurance if they want their insurance to cover abortion. As of Wednesday, the bill has passed the Texas House. For women who don’t pay this premium in advance, private insurance plans written in the state are prohibited from covering non-emergency abortions — even in cases of incest, rape, or fetal abnormalities or other health problems.

As this column has previously noted, the bill is problematic because it suggests that women plan to have their abortions ahead of time, and feeds the typical conservative narrative that women want, not need, abortion rights. But now, activists are worried about an even more dangerous potential consequence of the bill: Rape survivors having to pay for their own abortions.

“Nobody plans for an abortion, but we surely darn well know that it’s not a woman who is pregnant after a case of incest or sexual assault,” state Sen. Sylvia Garcia, D-Houston, said of the bill last month.

“Women don’t plan to be raped. Parents don’t plan for their children to be victims of incest,” state Rep. Chris Turner, D-Grand Praire, said. “Asking a woman or a parent to foresee something like that and buy supplemental insurance to cover that horrific possibility is not only ridiculous, it is cruel.”

All of this follows a slew of abortion restrictions passed and even signed into law in the state of Texas over the summer. This has so far included a ban on the dilation and evacuation procedure, the safest second-trimester abortion, and a requirement for abortion providers to essentially help the state create registries of those who have had abortions.

To end things on a somewhat high note, on Tuesday, a three judge panel ruled that law enforcement in Portland, Maine have the right to use local noise ordinances against to protect abortion clinics from anti-choice protesters.

Threats, harassment and even violence toward abortion providers have steadily been on the rise according to April reporting by NARAL Pro-Choice America. Scare tactics can prevent abortion providers from doing their jobs and helping women, and also intimidate and influence women’s decisions about their bodies.

Anti-abortion protesters typically justify their work by citing “free speech,” but not all speech is protected — namely speech and behaviors that threaten people’s safety and privacy rights. The decision by Maine’s attorney general, who is, coincidentally, a woman, marks a crucial step in the right direction to protect not only women’s right to bodily autonomy, but also their right to bodily safety.