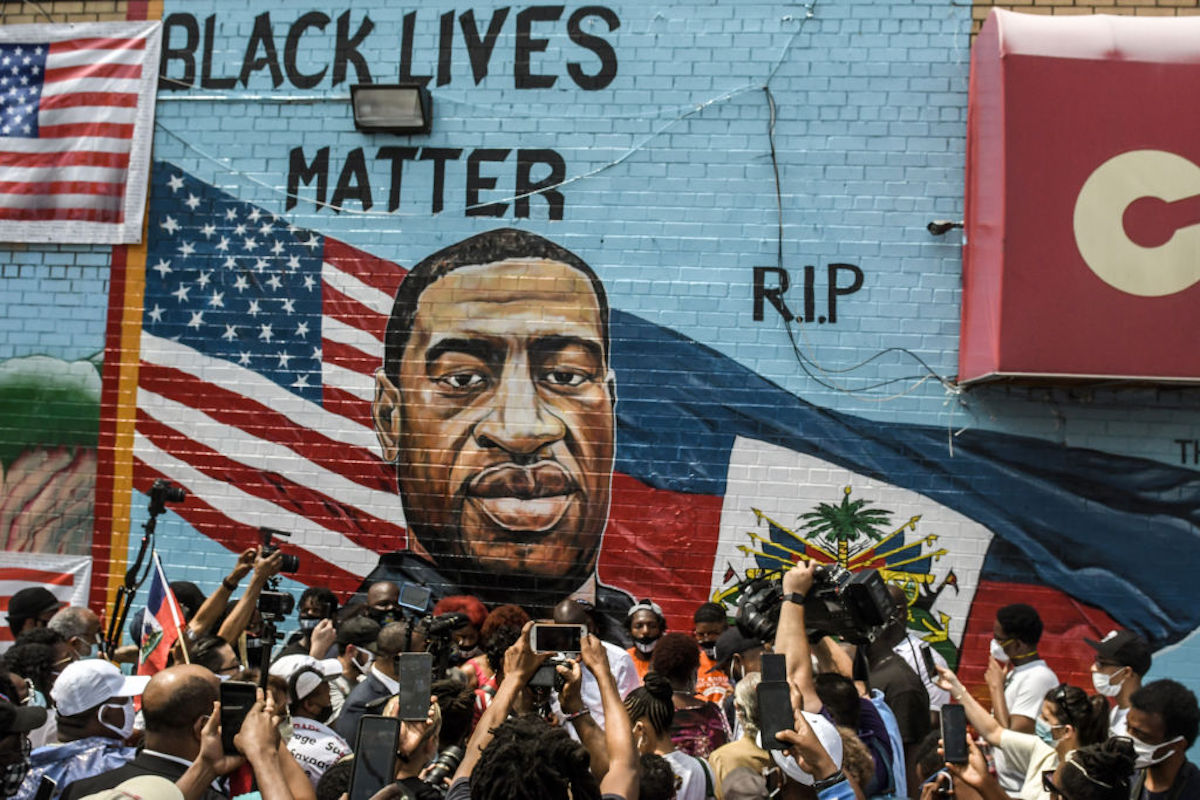 George Floyd was killed a year ago today in Minneapolis. His murderer, then-police officer Derek Chauvin, was found guilty on all three charges: second-degree murder, third-degree murder, and second-degree manslaughter. Last May and through the summer, outrage surrounding Floyd’s death propelled the Black Lives Matter movement to the global stage.

Protests in solidarity, and to further rally against systemic racism, injustice, and police brutality in America and elsewhere, were held in 60 countries on all seven continents. In the United States, it’s estimated that between 15 and 26 million people took joined together to protest Floyd’s murder, which would render it the largest movement in U.S. history in terms of participation. Many of these protests and gatherings were also met with police brutality, violent crackdowns, and enforced curfews across the nation.

On May 25th, 2021, a year to the day he was murdered, innumerable tributes and reflections on Floyd have filled social media, while in-person rallies and marches, including those led by Floyd’s family members, are commemorating Floyd and pushing for reform.

Here are some of the thoughts shared by public figures, activists, politicians, celebrities, institutions, and more in memory of George Floyd.

It’s been a year since those horrifying 8 minutes and 46 seconds stole George Floyd’s life. Today, I am thinking of this clip of his daughter Gianna, and all the young people out there who have seen so much, but refuse to give up hope. pic.twitter.com/VclaQksyso

George Floyd was murdered one year ago today. Since then, hundreds more Americans have died in encounters with police—parents, sons, daughters, friends taken from us far too soon. But the last year has also given us reasons to hope.

Before his name became a hashtag, #GeorgeFloyd was a human being who mattered.

A brother, a father, a friend. A person.

Justice would be George Floyd being home with his family, his loved ones, and his community today. pic.twitter.com/yPrH2cep8g

Today, we honor George Floyd’s life and mourn with his family. One year after his murder, we remain dedicated to rooting out systemic racism and police violence against people of color, and building a nation free of oppression that respects the human dignity of every person.

A year ago today we didn’t know his name, but now it’s forever etched in our consciousness: #GeorgeFloyd.

A “snapshot of the soul of this country.” I stand by it. #GeorgeFloyd https://t.co/I0m08Mez7w

Many people will turn George Floyd into a martyr today. We must fight to remember that he did not *give* his life for justice, for our movement, for an uprising. He wanted to live. He fought to live.

Today we remember George Floyd. We mourn for his family, friends, and the community his life has touched. But we also must honor his life by continuing the fight for justice, and that starts by acknowledging a painful truth: the United States Senate has failed George Floyd.

The 1 year anniversary of #GeorgeFloyd’s murder is a reminder that for some, the issue became clear 1 year ago. For many of us, Black Lives have never NOT mattered. If U R new to this, stay in the fight 🙏🏾 happy 1 year awakening. If U R not new to this, sending ❤️. Today & always

Image Description: a smiling, happy, living George Floyd, holding his one of his children, his daughter Gianna. Her daddy changed the world, but he should still be here to change her world.

If you aren’t commemorating with your action, try again. pic.twitter.com/G86QqxhWtC

The knee that was on George Floyd’s neck was funded by tax dollars.

The problems in our justice system are systemic, and have worked to prevent our communities from truly being safe. We honor George by continuing the work to finally fund and transform community safety.

Here are some tips on how to be intentional about honoring #GeorgeFloyd today:#antiracism101 pic.twitter.com/rwxdu6fOHb

George Floyd was a son. He was a father. He was a brother. And we failed him. Not just Derek Chauvin, he was to blame. But we all bear responsibility for a system in America that has allowed this to happen with such frequency. pic.twitter.com/Y8CHxzWfxJ

It’s been one year since George Floyd was murdered. In that time, George’s family has shown extraordinary courage. Last month’s conviction was a step towards justice – but we cannot stop there.

We face an inflection point. We have to act.

A year ago today, George Floyd was murdered. While nothing we can do will bring him back to his family, we must continue to work together to prevent the killing of Black and Brown Americans.

It’s a year since the death of #GeorgeFloyd in the United States. Across Britain people have been kneeling for 2 minutes in his memory. I’m live in Brixton on @5_News shortly speaking to campaigners about what’s changed since then pic.twitter.com/di5QFgXAXM

RIP George Floyd 🤍
🕊
“O, let America be America again –The land that never has been yet –And yet must be – the land where every man is free.” – Langston Hughes
🙏🏽@MonicaAhanonu pic.twitter.com/uoY7i2MBQH

A year later and we’ll forever say your name. It is all of our responsibility to create a more just and equitable society.

Last year, the world watched for 9 minutes and 29 seconds as #GeorgeFloyd lost his life before our very eyes. The curtain was pulled back on the systemic racism deeply embedded in our nation, & people of all ages, races, creeds & communities finally began to say enough is enough. pic.twitter.com/8VJpIZSuf7

ON TODAY, THE ANNIVERSARY OF THE KILLING OF #GEORGEFLOYD, NYC MAYOR BILL DE BLASIO ALONG WITH COMMUNITY & FAITH LEADERS JOIN ME IN KNEELING FOR 9 MINUTES AND 29 SECONDS. pic.twitter.com/KvIhXWdYxt

One year later and we are still changing the world in your daddy’s name, Gianna. #GeorgeFloyd pic.twitter.com/nbgKx88d8C

Among the all but uncountable American voices speaking out today and remembering Floyd, it’s striking to see international tributes, protests, commemorations, and art projects planned worldwide.

We unite today across the world through a day of anti-racism solidarity.

Many tweets from activists, social media users, and politicians, as well as reports from the media, are also rightfully emphasizing how little has altered policy-wise and how far we still have to go. Floyd’s murder sparked the biggest movement in our history and began conversations about racism and police reform in many new forums, yet actual substantive action from the federal government and city and state authorities has been lacking. Since Floyd died, at least 1,068 people in America have been killed by police. That’s an average of three people a day, with the killings disproportionately affecting Black Americans.

After Congress missed President Biden’s deadline to have the police reform bill bearing George Floyd’s name on his desk by today, Jen Psaki says she’s not putting a new timeline on it. She says the White House is allowing the space needed for negotiations.

Today we remember George Floyd, who was murdered by the state this time last year. Floyd should still be here. It’s time to pass legislation that provides resources and support in communities instead of funding violent systems that cannot be reformed. #BlackLivesMatter ✊🏾 pic.twitter.com/4UmKP8U72A

Remember that anti-Black racism is all around us, all the time. It’s not just the occasional physical stuff, like cops kneeling on our necks or folks spitting at bouncers. It’s in our *everyday* power structures. Too many people forget that latter. #GeorgeFloyd ✊🏾

While there is a long and steep road ahead when it comes to racial justice and police abolition in this country, the number of people saying George Floyd’s name and remembering him today is testament to the world that he changed.

We commit to creating a world where less people justify how you were murdered and more people cultivate justice.

We are praying for Gianna and for all of your friends and family.