SCOTUS to Decide Between Religious Freedom or Civil Rights 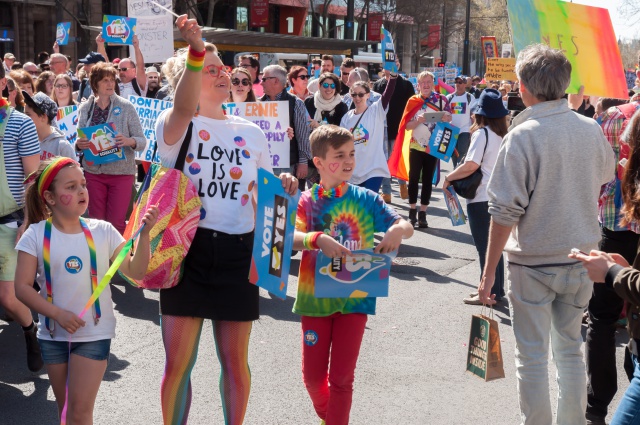 Today the Supreme Court began hearing oral arguments in the case of  Masterpiece Cakeshop, Ltd. v. Colorado Civil Rights Commission. The battle over the right for a Christian baker to deny making a custom wedding cake for a gay couple began in 2012 and has made it to the highest court in the land. How did we get here and what is being argued?

In July 2012, Charlie Craig and David Mullins, a same-sex couple from Colorado, were planning to marry in Massachusetts before returning home to have a proper celebration (at the time Colorado did not recognize same-sex marriage, this changed in 2014). They went to Masterpiece Cakeshop in Denver to order a custom wedding cake and the owner Jack Phillips, a Christian, declined, saying he did not create wedding cakes for same-sex marriages due to his religious beliefs.

Colorado is one of twenty-one U.S. states that actually have anti-discrimination laws against sexual orientation, which led Craig and Mullins’ to file a complaint that became Craig v. Masterpiece Cakeshop. This case was decided in favor of the plaintiffs; the cake shop was ordered not only to provide cakes to same-sex marriages, but to “change its company policies, provide ‘comprehensive staff training’ regarding public accommodations discrimination, and provide quarterly reports for the next two years regarding steps it has taken to come into compliance and whether it has turned away any prospective customers” according to the ACLU.

Phillips appealed the decision instead and removed themselves from the cake business. The state upheld the lower court’s sentence, saying that what Phillips was doing was discrimination and therefore illegal under Colorado law. The Supreme Court of Colorado refused to hear another appeal and instead Masterpiece Cakeshop petitioned the U.S. Supreme Court, who agreed to hear the case.

On our sister-site Law & Crime, they posted two articles dealing with the opposing viewpoints of the SCOTUS case by Ronn Blitzer and Elura Nanos.

Nanos breaks down the two arguments Phillips is making about “freedom of religion” and “freedom of speech.” The First Amendment Law doesn’t allow the regulation of belief, but it does cast limits on how you are allowed to behave. As a Christian. you certainly are allowed to be against gay marriage, but that belief is not protected. If a Christian man beats or kills a gay person it is still a hate crime, quoting Leviticus is not a legal defense.

Secondly, when it comes to freedom of speech, Phillips says that he is an artist. That has lead to cake designers have different opinions on what their type of artistry means.

“One influential brief, signed by 222 celebrity bakers and chefs (including Goldman, Georgetown Cupcake’s Sophie LaMontagne and Katherine Berman, Momofuku’s Christina Tosi, José Andrés, Anthony Bourdain, Tom Colicchio, Carla Hall and Padma Lakshmi) maintains that no food, not even dishes prepared by a three-star chef, is art or protected by the First Amendment.”

“Washington cake artist B. Keith Ryder made custom cakes for 17 years, including birthday cakes for Supreme Court Justices Ruth Bader Ginsburg and Antonin Scalia. “My feeling is that there is a lot of artistry and artisanship that goes into making custom cakes, but I’m not sure that qualifies the final product as a piece of art,” Ryder says. “In the end, it’s still a commodity whose primary purpose is to be eaten.””

“Other bakers disagree; a group of decorators in the South filed a brief supporting neither side but asserting that cake artists deserve as much protection for their work as artists using more traditional media.”

Human Rights Campaign Legal Director Sarah Warbelow says that: “As long as Jack is refusing to provide a service to anyone who walks through the door, that’s fine. That’s part of his artistic control over the products he makes.” However because he was selling wedding cakes to opposite-sex couples but not same-sex couples, it violates “public accommodation laws that prevent discrimination based on gender, race, religion and sexual orientation.”

Blitzer’s argues that Phillips’ decision “it’s not about the identity or sexual orientation of the customer, but the nature of the work” and that this idea that Philips is just a crazy homophobe, a bigot is unfair and misleading. That it isn’t a cut and dry case because it isn’t about just discrimination, it is about the role of government. “It’s about whether or not the government should be able to exert control over people and their businesses by forcing them to devote time and resources to something they don’t want to be a part of.”

Except, the government does that all the time. In almost every single facet of our daily lives, the government tells us we can and can’t do. The reason we have anti-discrimination laws is to protect people from prejudices because no one has the legal right to be an asshole. Phillips may not have any “hate” towards gay people, but he still did something illegal under Colorado law.

Why Does It Matter:

My feeling has always been, would we be having this discussion if it was any other faith? If this was a Muslim or Jewish bakery committing this sort of LGBT discrimination would the same conservative religious right be standing beside them?

Also, pitting religion and freedom of speech against anti-discrimination laws is not a place we want to go. Do we want to really say that the government protecting people who have a history of being mistreated in this country is a bad thing? Not to mention how will that blow-back against religious people?

Fewer people are identifying as Christian every year and there are many different denominations, each with their own way of expressing faith. What happens if they are discriminated against and we have decided that government should turn a blind eye?

Plus what happens to LGBTQ religious people?

What happens in this case will decide if we will be moving backwards in terms of how we treat LGBTQ people in this country or forward.

As someone who grew up in a religious environment and remains a non-affiliated religious person, my thoughts on this case are simple. I think religious freedom is important, it is one of the founding principles of this country, and that it needs to extend towards people of alternative poly/mono-lithic faiths. However, religious rational concerning discrimination of anyone should not be protected by the government. Let us not forget that religion was used to promote slavery and the murder of Indigenous people, as well as segregation.

Phillips is a businessman and if his business discriminates, that is illegal.

Also, why doesn’t anyone ever use the “love your fellow man” part of the Bible? Do we not trust hippie-love Jesus?

(via Law and Crime, image:Greyboots40 / Shutterstock.com )