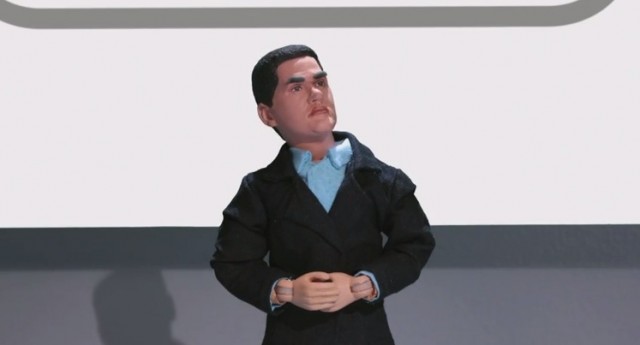 Streaming live gameplay to Twitch has seen an explosion since the PlayStation 4 and Xbox One added the capability as a native part of their consoles, but Nintendo’s Wii U hasn’t followed suit. Why? Because it’s not fun, of course!

In an interview with Polygon, Reggie Fils-Aime—Nintendo of America President and CEO and noted Internet meme—talked about why the Wii U doesn’t have the capability to stream on Twitch. Personally, I’d have guessed it was because of hardware limitations of the Wii U, since it’s basically a last-gen machine with any extra power it does have going into streaming video to the GamePad.

According to Reggie, I’m wrong about whether or not the Wii U’s body is ready for Twitch streaming. It’s not a hardware limitation; it’s just that streaming gameplay on Twitch isn’t fun. I wish I was making this up or being hyperbolic, but he actually said those very words. Here are some direct quotes from Polygon:

We don’t think streaming 30 minutes of gameplay by itself is a lot of fun.

It just gets worse from there, too. Nintendo’s E3 streams have been completely bonkers and clocked in at tens of thousands of viewers at a time—not to mention that their Smash Bros. Invitational tournament stream got up to at least 175,000 concurrent viewers when I checked. If that should tell Reggie anything, it’s that whether or not he thinks it’s fun (I mean, I’m not even personally that interested in the feature), his audience sure does.

But he’s got rationalization for that, too.

So for us, what we’re doing at the Nokia theater with the Smash Invitational, we loved that streamed because that’s where you are able to see how these players perform, the moves they make, you can learn something. That has value to us. And you can expect us to do more of that type of activity, highlighting our games and providing a forum for players to learn how to play better.

But that’s different than watching Joe Blow’s 30 minute stream, which may or may not have something that’s all that interesting.

Ouch. You hear that, all you Joe Blows out there? No one wants to watch your boring stream. Just stop.

He even had reasoning for why Mario Kart 8‘s video sharing, which has spawned a rather popular meme, was different. He said the editing allows you to focus on just the interesting parts, which makes it different from those boring gameplay streams.

I take no great pleasure in the fact that he said these things, because Nintendo was displaying such an understanding of their fans at E3 this year. Unfortunately, it reminds me of what I already had in the back of my head: Nintendo’s PR team (aside from this misstep) understands its fan base very well, but they have trouble translating that into their products.

Their E3 digital event in place of a traditional press conference talked the talk in a big way. It really resonated and felt honest and fun in a way the other press conferences just didn’t get, which is why Nintendo made the change from press conferences in the first place. Then, the Smash tournament was a sudden embrace of the competitive community, which they even mentioned directly in the event’s rules, saying, “Grand Finals is a 4-stock, 8-minute, 1-on-1 match on Battlefield as an homage to the competitive Smash Bros. community.“

For me, they won E3 this year when it came to communicating effectively to their audience and generating excitement, which is what E3 is all about.

On the other side, though, they might still have missed what their fans want on the technical side of things. They had some stand out gems, don’t get me wrong—but there was a lack of real wow content outside of Zelda, and we all knew about Smash Bros. since last year.

On top of that, the new Smash Bros. games, while I think they’re going to be generally good, still probably aren’t what the series’ competitive community is looking for. I still enjoyed playing the Wii U version, and it likely won’t divide the community the way Brawl did, but it’s very clearly committed to staying the course and making minor concessions. That’s not the end of the world, but it certainly doesn’t help, and it’s weird considering their clear understanding of what the competitive community is about.

On top of that, the Smash Fests they held at Best Buys around the country were an awesome idea and got everyone really excited, but many stores in populated areas only had one copy of the game on Wii U, so hundreds of fans wound up waiting for upwards of four hours for a single, two-minute match. And I don’t have all the details from every location, but at the store I attended, they had the 3DS version running on battery power, and the batteries died before the event was over.

Also, at least 200 people at my location wound up waiting for hours for nothing, which wouldn’t have happened if they’d had even one more console set up to play the game. I can’t imagine that left them with a good impression, even though the idea of the event was flat out brilliant.

Then, there were offhand comments that hinted at the character seen in the new Zelda trailer being female, which turned out to just be… jokes, I guess? Again, they know it’s something people would love, but for some reason they have no intention to deliver.

Now that we’ve got Fils-Aime saying that Twitch streaming isn’t fun, it’s clear that there’s some dissonance between understanding the audience and putting that understanding into practice. Streaming gameplay is becoming a huge market, and it’s largely led by Twitch with over 45 million monthly visitors. The other two consoles this generation have embraced it, and they’re both outselling the Wii U despite its release a full year earlier.

Nintendo still won E3 for me this year in terms of fan outreach, but that’s a lot different from winning the console war or even the war over my wallet. That’s why I really hope this nonsense about streaming not being fun is just PR speak to cover up the Wii U’s technical limitations, because I don’t want to live in a world where my favorite game company flat out denies that one of the biggest revolutions in gaming is even happening.