If you live on the internet, you may have noticed that there was a lot of push for the Rally To Restore Sanity and/or Fear from the Reddit community.  Although some disagree as to whether Reddit was ultimately responsible for inspiring the Rally, one thing we can say for sure: the Reddit community helped, by getting incredibly enthusiastic and incredibly vocal; by banding together for carpools and sign suggestions and couches to crash on; and by raising over $500,000 for Donors Choose.

In order to honor those members who actually attended the rally with an online trophy, the administrators of Reddit set up a system by which each account name would be assigned a QR code and a two digit number.  Collect all the codes/numbers and usernames of all the Redditors you meet, enter them when you get home from the Rally, and as long as those Redditors also enter your code, you are confirmed as having met them.

The above is a (cropped) representation of all the Redditor connections made at the official Rally in Washington D.C.  Full thing and a few more to follow. 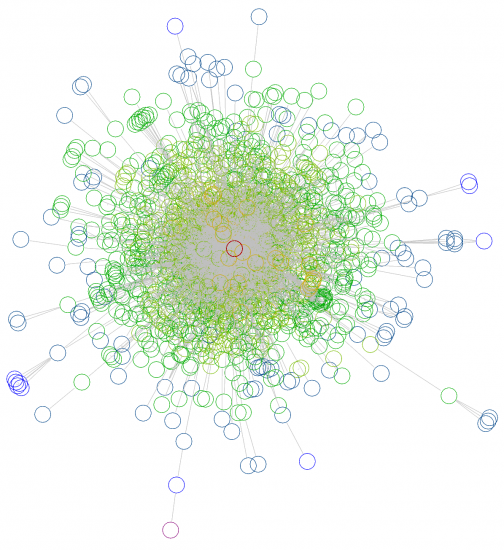 This represents all of the 1,909 Redditors who made 12,987 connections in DC the day of the Rally, with the center representing the official Reddit booth of admins.  And yes, the one purple ringed Redditor at the bottom, the only person at DC who was more than five degrees of separation from the admins, is getting a special trophy.

2,050 Redditors participated in the code based hookups, about two thirds of them in DC.  These options were, of course, also available to those at satellite rallies. You can find the graphs for all of those meetups at the Reddit blog post on it, but for the moment, we just have one question:

What the heck was going on in Portland?