Somebody Made a TARDIS Jukebox out of Recycled Cardboard, and It’s Pretty Amazing

A TARDIS made of pizza boxes sounds like the greatest thing to ever exist. 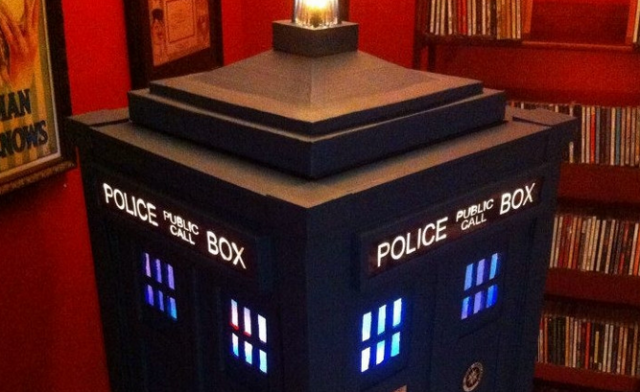 Nine months ago, geophysicist David Prouty’s teenage daughter challenged him to create something awesome out of recycled boxes for Doctor Who’s 50th anniversary. He’s a tiny bit late, but after seeing that he basically made his own whooshing, light-flashing TARDIS, we’re totally willing to forgive him.

According to Prouty, the body of the police box — which, at 1/3 scale, isn’t quite the same size as the actual television prop — is made of old Uhaul, FedEx, and Pizza boxes. Hang on, a TARDIS made of pizza boxes? What.

It gets better, too, because the insides have rotating disco balls, sound activated LEDs, and a fog machine that are all powered by wireless remote. There’s also an internal Bluetooth speaker that can connect to a iPhone or iPad, so Prouty is able to stream basically whatever music he wants into it. Yep, that’s right — it’s not just a TARDIS but a TARDIS jukebox.

In the below video, he demonstrates with some audio from the actual show, including the theme song.

Okay, the theme song is great and all (and we certainly appreciate the fact that he went with the one of the RTD-era versions — series 4, it sounds like?), but this is a jukebox and we want to hear a little more variety. Can you just imagine walking into a room and seeing a little tiny TARDIS with lights flashing and smoke coming out of it, and then listening to it playing the “Party Rock Anthem”? Come on, that would be amazing.

You can see more pictures of the Recycled Tardis Jukebox, including shots of the interior set-up, at imgur.