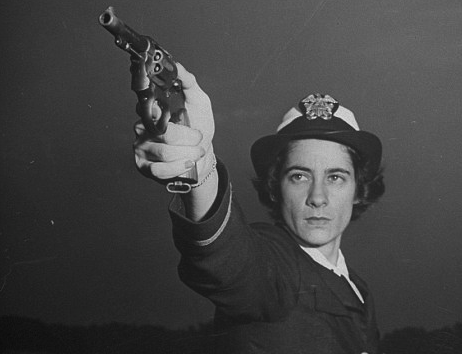 Over Christmas, I picked up and dropped off my grandmother at her assisted living home. She is well into her 90s now, little and slow. But as a family, we take some pride in the fact that she has one of the better decorated rooms in this home. It includes things from her house she holds dear; blankets, pictures of her kids and my late grandfather, cookies and candies, and a very wonky statue which was recently decapitated by a nurse. Her head has been duct taped back together, and there she stands; a statue of a World War II WAC. After all, my grandmother held tightly to those memories of her time serving in the Women’s Army Corp.

I love the Captain America movies for multiple reasons. They look great, are well written, have emotional depth, and make a real effort at showing gender equality. But the character of Peggy Carter (portrayed by Hayley Atwell, soon to star in ABC’s Agent Carter) will always hold a special place in my heart, especially after seeing Winter Soldier’s version of the character – old, sick, and riddled with Alzheimer memory loss. It hit very close to home. My grandmother is the same age, suffers some of the rapid memory loss, and in the 1940s marched with pride in a uniform very similar to the one Peggy war on screen. 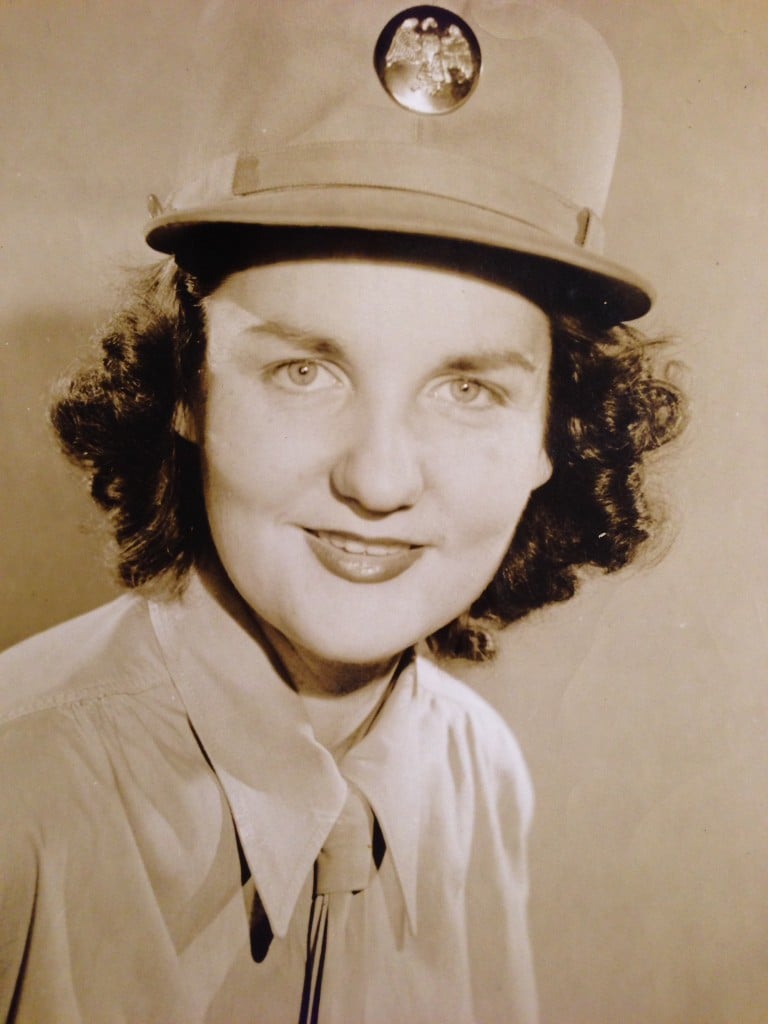 Now, Peggy Carter’s character is a little different than the WAAC/WAC we know, but not that different. For one, nearly every country in the war, Axis and Allies, opened service to women during this war effort, including British women like Carter. And whether part of the official military or hired to work for military projects, there were many woman working on secret war projects, like the secretaries working with code breakers and science departments. The character of Peggy in Marvel Comics was originally a freedom fighter for the French Resistance, but in the films she’s a member of the Women’s Royal Service working with the Americans on a secret weapons project. Considering First Avenger was firmly rooted in the serial superhero movies from the 1940s, a character like that makes perfect sense – except women never got silly serials about them. And there are truths to her character which would have a long lasting impact on the women’s movement. For women like my grandmother and her friends, the WAC wasn’t just an opportunity to serve their country and help the war effort, it was a chance to embrace a little independence few women were allowed.

Personally, my grandmother was essentially following in her mother’s footsteps. My great-grandmother was a Harvey Girl, working as a waitress for the train company restaurants and hotels. If you’ve ever seen the classic Judy Garland movie, they got a lot right (and a lot wrong), but they did capture something very important about that time for women. If you didn’t want to live at home with your parents, or marry as soon as you reached adulthood, Harvey Girls were an opportunity to gain “some” independence for a few years. Yes, they were restricted by dress code and curfews, but they were given far more independence than most women of that day. Unsurprisingly, my great-great grandmother married the restaurant’s pastry chef, had kids, and left the work force to be “a housewife.” One of those kids was my grandmother.

My grandmother is the type of woman who if she had been born 15 years later, might have had a completely different life which wasn’t the 50s housewife role she eventually took. After all, she informed her mother at 12 years old she would never have kids (ended up having 10), didn’t have any love for housecleaning or cooking, and at 21 joined the WAC. And according to stories she told me, it was one of the best times of her life. 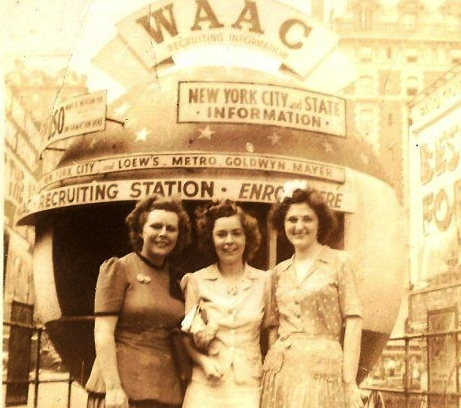 Ironic considering she had a fundamental problem with the idea of the military way of making your bed because “what’s the point” and remembered she was always last one to breakfast which meant cold spongy eggs. And she had a tendency to not be “the best behaved” WAC in uniform (she was always quick with a response) and occasionally had to clean the bathrooms. But for women like her, it provided the only opportunity to spend a few years out of her parents’ house, before marrying, the Army was freedom. And despite her lack of military temperament, she was working without the supervision of her father, or permission of a future husband.

When I asked her what she did in the army, her response was usually, typing. Apparently, she sent a lot of letters out in those years, and she became an impressively fast and accurate typist. Part of the reason she was an excellent office volunteer at the Red Cross and enjoyed working at her husband’s office. But the job strikes me as far less important as the life it afforded her, perhaps because the opportunity to join the WAC came at a time when she assumed marriage and motherhood was a predetermined future. Nothing else seemed possible. 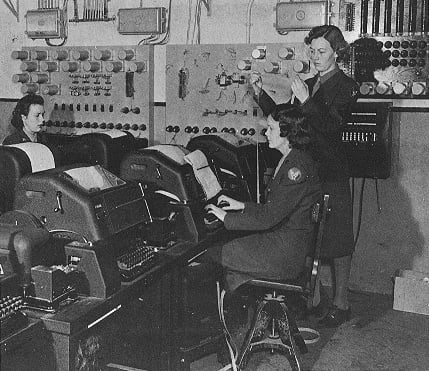 But what I do remember my grandmother telling me about, besides having to clean the bathrooms and being sentenced to 30 days of making the barracks bed (don’t talk back to your commander), were two moments she took great pride in. One of those was the day she was taken in by the MPs and talked her way out of trouble.

The day before her wedding, she and my grandfather visited the priest and were walking to dinner. Both in uniform, she was shocked to find herself dragged into the MP station, my grandfather baffled that she suddenly wasn’t by his side. The reason? Enlisted people could not walk side by side with officers (which my grandfather was). Now what she said, she never told me, but she did say she fought back tears and fear and within minutes convinced them to let her go on his arm without so much as a warning.

The other day of great pride was when she marched for Eleanor Roosevelt. She loved Eleanor Roosevelt and meeting her, a quick handshake, was something she told me was the thrill of a lifetime. She walked in a well-pressed uniform of skirt, suit jacket, and hat. And the woman who made all this happen was Oveta Culp Hobby, the director of the WAAC and WAC. Do you know the name? You really should.

A demonstration of The WACS for the Roosevelts, the event my grandmother mentioned being so proud to have taken part.

Oveta Culp Hobby advocated for the creation of the Corps to replace the men at war being shipped overseas. She led more than 100,000 women both overseas and at home, most providing administrative services. She was a Texan native who worked for the Texas House of Representatives as a young woman (educated as a lawyer) and worked for the Houston Post with her husband. She eventually took over as the editor and publisher of the paper. After her war service, she also was named Head of the Federal Security Agency and became the first female cabinet secretary in 20 years after Francis Perkins 1933 appointment (it would be another 22 before we saw another). As the first secretary of the Department of Health and Human Services, she was the first woman given the opportunity to create and organize a department. It was her organization of the WAAC and WAC which made her the perfect choice for these positions.

Hobby also led what amounted to 150,000 women in the face of official and unofficial slander against the WAC. Despite General MacArthur telling the press the women serving in the Army, Navy, and Air Force were “my best soldiers” because they worked harder, complained less, and were better disciplined, they still faced criticism from those in and out of the Army. Complaints ranged from claims they were promoting masculinity among women, trying to “replace men” and devaluing women’s role at home and in the family. And to be honest, the WAC kind of was subverting some of these notions of the “Woman’s Role.” They were providing an alternative which included a community of single women and self-sufficiency. And some women who had served and left to marry and have children were unsure if that was the best choice after having the taste of something different. 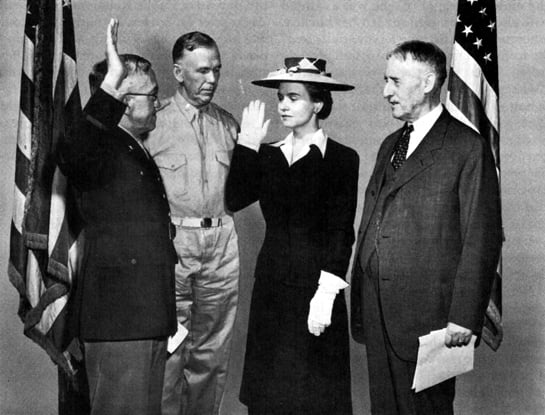 Swearing in of Oveta Culp Hobby in 1942.

Until women were permitted to join the army, the WAC remained an active part of the military, but never gained the attention they drew in the 1940s. It was active for more than 35 years, always as an official, military run organization, with a woman in command. But by the time it was disbanded, it was barely mentioned as having been vital part of integrating the military or its role in the current Women’s movement. After all, a number of the daughters of those early WACs (whether they knew it or not) would become the feminists of the future, going off to college and getting jobs before, or instead of, having a family.

So when you sit down to watch Agent Carter, enjoying the humor, action, and spy games, think about some of those women the creators based the character on. The young women who escaped homes to serve, gave of themselves out of a sense of war time obligation, but also for the opportunity to assert independence they never experienced. And the women who took that opportunity to turn it into something even bigger so future women could enjoy opportunities they could never have dreamed of.