Reading Rainbow to be Reinvented for iPad 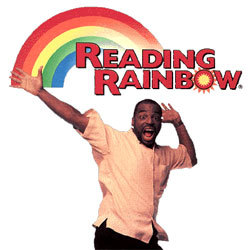 As all you children of yore are bound to remember, Reading Rainbow was, by far, the best television series about books, hosted by a guy who was also on Star Trek: The Next Generation to ever be on public television. You may not have taken notice, but the show was ultimately cancelled in 2006 due to budget problems. There is good news though, LeVar Burton (turns out his name isn’t actually “Reading Rainbow” like I thought it was when I was a child) is reinventing the show for the iPad.

If you remember, the show consisted in large part of picture books being read on screen, and some occasional live-action vignettes. Well, the iPad version intends to recreate the books part by providing kids with narrated, perhaps even partially animated, PDF versions of childrens’ books that will recreate that terrific experience.

The new for-profit venture is called RRKidz and is looking to provide 300 multimedia-ified books at launch. Burton says that RRKidz has the capability to turn a PDF into an experience befitting the iPad in only a matter of hours, so there is potential for many more books to eventually be included. RRKidz will be a subscription service, but there’s no word on how much it’ll cost. The idea is that once parents shell out for the service, kids will be free, even encouraged to explore and consume as much as possible, which I think we can all agree is a good thing.

It’s good to see LeVar coming back at this Reading Rainbow thing even after public television had to give it up. While it seems a little unlike the Reading Rainbow of old to be charging, someone has to cover the cost and clearly public funding has faltered in the past. I don’t have any kids, but I’m sure this would be a more than worthwhile investment. My only question is will it still have the theme song? And will they say “take a look, it’s in an eBook”?