Won't you say you love me to? 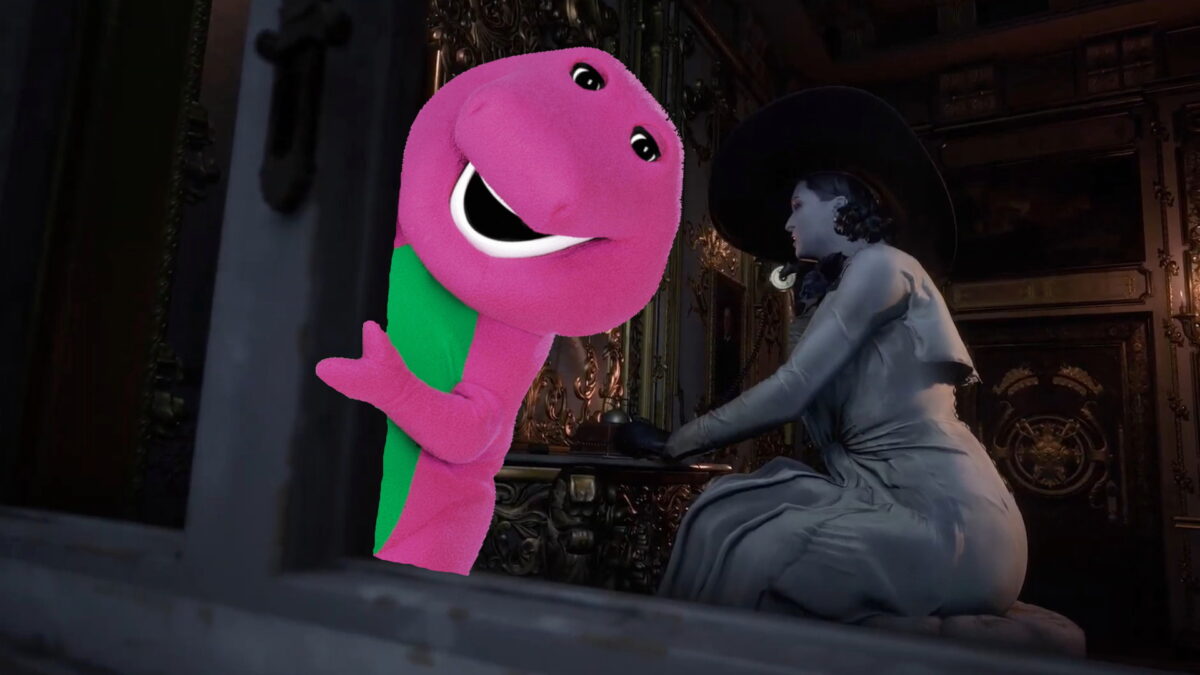 Resident Evil: Village is set to come out this week (May 7th) and I’m hoping that I have difficulty sleeping at night from all the scares it has to offer—assuming, of course, I don’t spend an undisclosed amount of time “running away” from Lady Dimiterscu. Even if the game hasn’t been released yet, the PC modding community is already hard at work ramping up the nightmare fuel with images you probably didn’t know you needed until now.

Or maybe you don’t need them? I dunno, it’ll at least make you side-eye a beloved childhood icon.

Thanks to a modder known as Marcos RC, you can turn all of the enemies in the Resident Evil: Village demo (assuming you haven’t already played it for 60 minutes, which is the amount of time you get with it) into Barney the Dinosaur.

It might seem like a bizarre choice, but let’s be real: Barney’s all about being a happy family, something Lady Dimitrescu can probably respect since she’s got daughters roaming around that giant castle. Barney would be all for offering great big hugs (and a kiss from me to you) to visitors, and really, don’t you want a warm welcome when exploring a clearly haunted castle?

That, and he’s a dinosaur, something fans of the franchise have come across before. Finally, Barney would be allowed to channel his animalistic roots.

Barney offers some much-needed color, though. I always did say that the one thing Resident Evil was missing was a splash of color.

Seeing an army of bloodthirsty mascot characters is unsettling in a very “shouldn’t be entertaining” way. Since the mod replaces the Resident Evil: Village creatures with a huggable, loveable friend, you get to see Barney lumber over toward you, take a vicious swipe with a plush hand, and make hideous noises as he and his army of, um, friends try to murder your face. The video takes the time to show off what it looks like to shoot Barney, stab Barney, and, of course, get attacked by him in numerous ways.

Did I mention that Barney’s carrying weapons? I imagine this is what Five Nights at Freddy’s would be like if you got to get up and fight against the animatronics.

Since the mod is for ALL of the creatures, I do wonder if that includes Lady Dimitrescu. Is there a cutscene of you being grabbed by the neck, lifted in the air, and pawed in the face by Barney? Or does the mod exclude bosses?

Either way, I think it’s worth investigating … vicariously. I don’t think I could play through a game where a 9-foot tall plush pal is coming after me.

With the game set to release so soon, it makes me wonder what other kinds of mods we can expect out of the community. What other beloved childhood stars are gonna show up in the Resident Evil world, and will they be as intimidating as a dinosaur who just wants you to say that you love him, too?