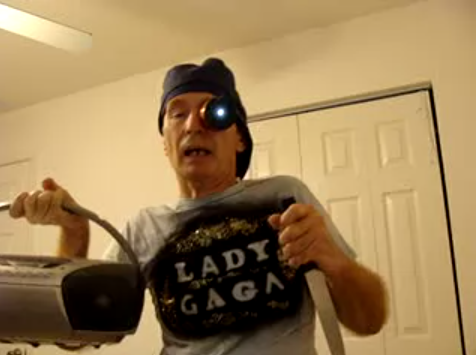 You’ve probably never heard of Ray Sipe, but nevertheless he is one of the most prolific YouTubers out there, with a massive 1,098 videos on his channel at the time of this writing, all uploaded over the span of a 9 months. Sipe’s a songwriter with a unique chanting style that really drives a point home — dozens of times — and through his work, he seems to be attempting to cover literally every possible subject, from “Turtle Gymnastics” to the death of Amy Winehouse. The tunes are quite seriously beyond belief, and I’ve collected a nice sampling to give you a taste. Consider it Zombie Caterpillars: The Best of Ray Sipe. Trust me, you need to see these.

1. Lion king. We’ll start out with one of Sipe’s simpler pieces. “Lion king” is primarily concerned with driving home a singular point, but I won’t spoil what it is for you.

2. Mr. Lobster. Unlike “Lion King,” in “Mr. Lobster,” Sipe introduces the question of whether or not it is ethical to eat animals, going so far as to apologize to Mr. Lobster and lamenting the misfortune of being so tasty.

3. STD’s are not ABC’s. One of Sipe’s main goals, it seems, is to be informative. Here he warns of the dangers of STDs. They are bad, apparently. It’s also worth noting that the increased distance from the camera here allows you to admire his shirt.

4. Adolf Hitler. Don’t get Sipe wrong; he does not approve of Hitler. He does however, like to cover the news. In this case, he covers the story of a young boy in New Jersey named after Adolf Hitler.

5. amy winehouse funeral. Here, we see Sipe’s touching tribute to the late Amy Winehouse who is, sadly, gone forever and ever.

6. Nyan Cat Pooing Rainbows. In addition to breaking news, it seems that Sipe keeps on Internet culture as well. Here is his contribution to the Nyan Cat crazy. Related: Whatever cat he has gained access to here has the patience of a saint.

7. Angry Birds Will PECK  Your Eyes Out! Considering his awareness of the Nyan Cat, it’s not surprising that Sipe is familar with Angry Birds. I’m not sure where he picked up the misconception that they will peck your eyes out, however. Maybe he’s talking about actual angry birds.

8. iPhone [Eyephone]. Here we see Sipe’s creative side really shine as he makes use of a brilliant piece of wordplay. It’s the perfect companion to the classic “Angry Birds Will PECK Your Eyes Out!”

12. Turtle Gymnastics. Lastly, in this song, Sipe imagines a glorious world in which turtles do gymnastics to stay in shape and have fun. How I long to live in such a world.

Bonus: Happy Valentines Day. Sipe’s latest work. Send this to your sweetheart if you need a surefire gift.