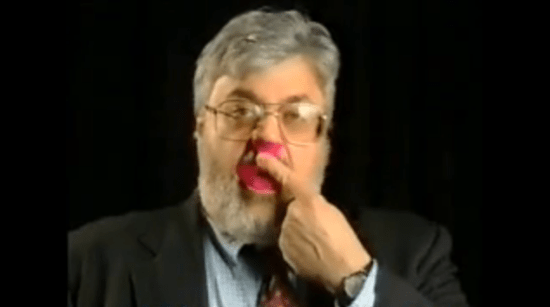 So, you may be, well, you probably are asking yourself what a nose flute is. Technically, it’s a whistle that has its air intake at the nose and uses the mouth as a soundboard. Change the shape of your mouth and it changes the pitch of the whistle. But that’s not the important part. The important part is that your typical, consumer model nose flute, is neon colored and plastic, so when you hold it up to your face, it’s not unlike holding up the end of your nose to look like a little piggy. That’s not the only option of course. If you need your hands free, you can wear it with a strap, resulting in a nuanced, fake pig-snout, Hannibal Lector look. Did I mention it sounds sort of like the wheezing of a stuffed up, out of breath asthmatic prancing through a pollen smog? Well, it does. Kind of like a recorder. Makes you wonder, what is the best possible use for such a unique instrument. That’s right: embarrassing covers of theme songs and songs from 30 years ago.

Nose fluting certainly isn’t all the rage (yet), but if you search the annals of YouTube there are some lovely, lovely hidden gems to be discovered, and that’s just what we’ve done. Check out some soul-wrenchingly beautiful covers of “Stayin’ Alive,” the James Bond, Mario and Star Wars themes and more after the jump.

First up, we’ve got the James Bond theme as performed by Will Grove-Smith, who presumably dabbles in nose flute when he’s not too busy being a member of the Ukulele Orchestra of Great Britain. Note his ability to keep an absolutely straight face which is almost as impeccable as his mastry of the nose flute.

Bringing it back to basics with a classic Ukulele and Nose Flute combo, here’s the Muppet Show theme, filmed from a high-tech bathroom recording studio.

And of course, you can’t leave out the Star Wars theme. What’s a collection of amateur covers without a little John Williams?

So, now that we’ve got our theme song bases pretty well covered, let’s move on to some classics from the 70’s and 80’s, shall we?

“You’re the Best Around”

“Stayin’ Alive.” Adding a little dancing to the mix here. He’s a lady’s man. No time for talk, only nose flutes and dancing.

Last, but not least, we have a cover of the classic blues song “Makin’ Whoopee!” by none other than Santa Claus. At least I think that’s him. This one’s kind of a slow burn, but wait for it. It’s worth it.