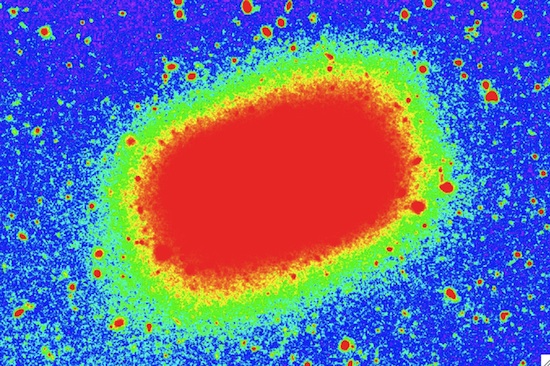 Scientists at the Swinburne University of Technology are saying they’ve made a surprising discovery: A rectangular galaxy. Being called a “emerald cut” galaxy because of it similarity to a styled gem, the the galaxy is extremely small with 50 times fewer stars than our own galaxy and is about 70 million lightyears away. Though its shape surprised scientists, they’ve already got a theory as to why it is the way it is.

Associate Professor Alister Graham, the lead author of a paper which will appear in The Astrophysical Journal believes that as far as this galaxy is concerned, its inside that counts. Further observations from the Keck Telescope in Hawaii revealed a spinning disk of stars within the edgy galaxy. This disk was moving extremely fast, at over an estimated 62,000 miles per hour.

This suggests to Graham and his colleagues that the emerald cut galaxy is the result of a merger between two spiral galaxies. The stars within the two galaxies were pushed out into large orbits, while gas was pushed inward towards the center of the rectangle. There, it coalesced and began to create new stars in the rapidly spinning disk. This theory is based on existing models for galactic collisions, combining scenarios where merging creates a squared-off appearance and others where merging creates new stars.

Graham remarked on the surprising nature of the find, saying:

“It’s one of those things that just makes you smile because it shouldn’t exist, or rather you don’t expect it to exist. […] It’s a little like the precarious Leaning Tower of Pisa or the discovery of some exotic new species which at first glance appears to defy the laws of nature.”

Interestingly, Graham says that if circumstances are just right when our own Milky Way collides with the Andromeda galaxy in some three billion years time, we might end up in a boxy galaxy ourselves. Perhaps the emerald cut galaxy is just a portent of things to come.