Post Pictures of Your Kids Online, They’ll Thank You Later 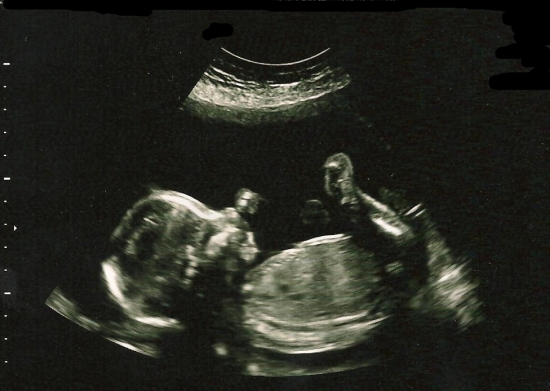 In an editorial piece published yesterday on TechCrunch titled “The Gift of Online Privacy,” Cyan Banister calls for parents to think twice before sharing every milestone in their child’s life on the Internet. As the title implies, she considers privacy one of the greatest gifts a parent can give to their child. I disagree. As proof, the above image isn’t some picture I pulled off the Internet. That’s the 20-week ultrasound of my daughter. I’ll post a photograph of her in about six weeks when she’s born, because I think photographs make a better gift than privacy.

Banister’s argument is based around the idea that people, even children, should have a choice about their privacy when it comes to what parts of their lives they share online. I agree with that in basic principal, but where Banister and I seem to diverge is about when a person should be making that decision for themselves.

My daughter isn’t going to be making a lot of decisions right after she’s born. She’ll really only be able to decide whether or not she cries. She can decide to cry because she’s hungry, but won’t be able to decide to eat unless someone feeds her. Or she can decide to cry because she wants a clean diaper, but can’t decide to change herself. As her parents, we’ll be making all of her decisions for her for quite some time. One of those decisions is who will see pictures of her, and I’ve decided that should be everyone in the world.

When a friend of mine was pregnant, she put an announcement up on Facebook to say that they would not be putting up pictures of her new baby online, and they cited a lot of the same reasons Banister gives in her article. She wanted to respect the baby’s privacy. It was about a week or so after the baby was born when the first picture showed up on Facebook, followed immediately by the second, third, fourth and so on. I’ve since unsubscribed from her feed because I don’t want to see further pictures of her kids.

I’m not worried about my ruining daughter’s privacy, because babies don’t have privacy to begin with. My daughter will have adults changing her diaper, bathing her, and even monitoring her while she sleeps in high definition video. Nothing about a baby’s life is private, so why shouldn’t we share pictures of our kids online?

That’s what people do. They share pictures of their kids. The only thing that’s changed is the medium. Before the Internet, proud parents carried wallets full of pictures of their children, just waiting for an excuse to pull them out in a conversation. Now we save pictures on our phones and share them through Facebook.

At 29, I straddle the digital and analog generations, but most of the events in my life have been photographed and documented because of my family. My grandfather was one of the first people to have an 8mm home movie camera, so even my mother has much of her life on film. My father photographs and archives every event he can in the lives of his five children, and now two — soon to be three — grandchildren. There are hundreds of reels of 8mm film taken by my grandfather in my family. My father has boxes and hard drives full of pictures and videos of all of us. Some of them are embarrassing, but I don’t think that anyone in my family wishes for a second that they didn’t exist.

(via TechCrunch, image via sonogram)