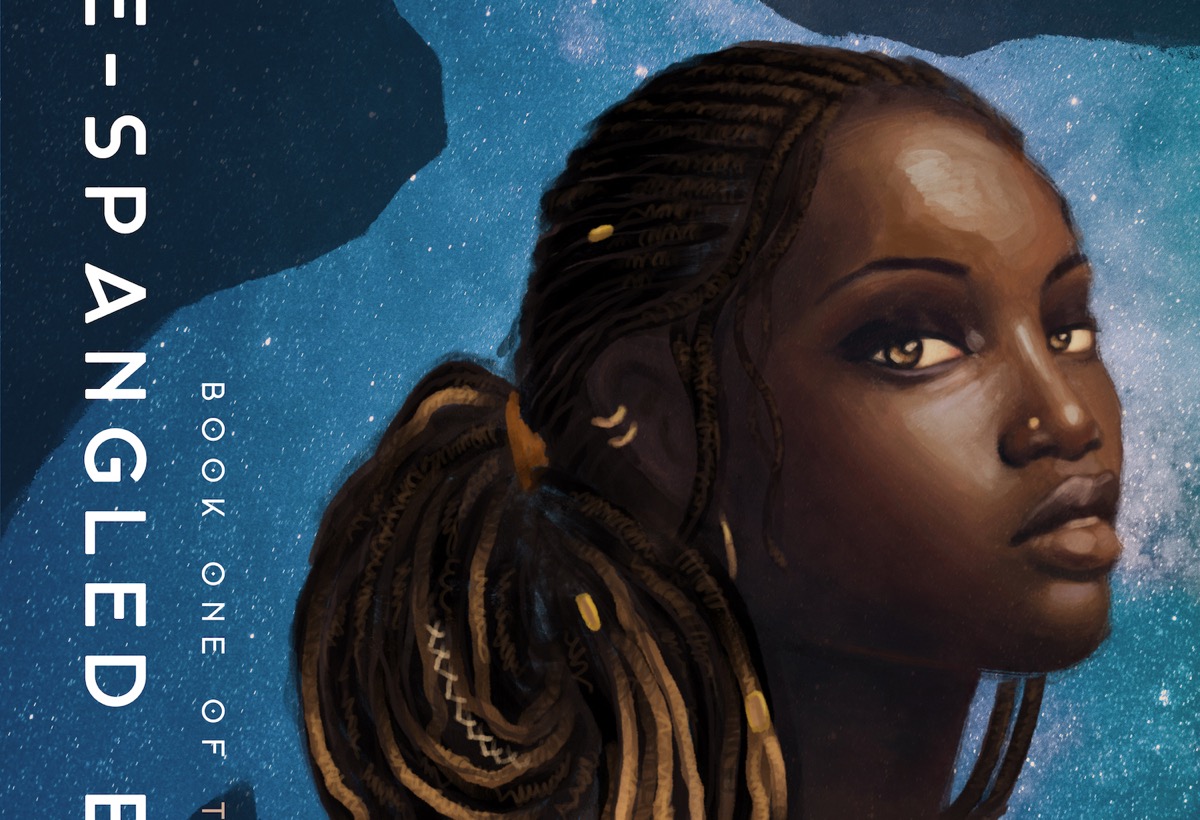 A few weeks ago, discourse erupted when David Bowles revealed the new cover for his book, The Blue-Spangled Blue.

First published in 2009, The Blue-Spangled Blue poises itself as an immersive sci-fi epic filled with an enormous cast of characters. On the cover was seemingly the protagonist of this ensemble: a beautiful dark-skinned Black girl with braids, standing in front of a deep indigo background and starry outline of a man. An absolutely beautiful cover, promising what appeared to be a sci-fi tale of a Black heroine embarking on an adventure amongst the cosmos—or finding a memorable, star-crossed romance.

Unfortunately, however … that ended up not being the case. A few hours after Bowles revealed this cover, criticism popped up online over what many felt was a misrepresentation of the actual content of the story. The Black woman on the cover was in fact not the protagonist—and what was worse, she apparently was only a minor character whose POV (point of view) was never delved into in this particular book.

Though Bowles issued a statement acknowledging the criticism, and quickly released a new cover more accurately showcasing the content of the story and the characters within, the uncomfortable question still lingered: Why did the cover reflect something else the first time?

Another example of a similar issue was found in Kristen O’Neal’s Lyncathropy and Other Chronic Illnesses.

Though the book has not even officially been published yet, a glance over the initial feedback on Goodreads finds it riddled with critiques over the depiction and presentation of both the cover and the story itself, which centers on a South Asian character dealing with chronic illness. The book, however, is written by a white author.

Now, on the surface, it may be easy to dismiss the critiques toward The Blue-Spangled Blue and Lycanthropy and Other Chronic Illnesses as mere book discourse; it may be even easier to push back against the critiques as an unfair policing of creativity.

“Who cares who wrote the story?” some opinions may challenge. “Anyone should be allowed to write whatever it is they like, no matter their identity!”

And of course, that is absolutely true and valid. But the problem in this notion comes when marginalized groups that have experienced immense barriers of accessibility and respectability in publishing suddenly find their experiences being co-opted, or their covers being replicated, in the name of “diversity” as a trend, rather than as an authentic, intentional ethos.

Many Black authors who are now published have spoken on the obstacles they’ve faced in even getting their stories to the publishing stage. There have been many stories—covered here and in other places—of Black authors who were told that “Black stories don’t sell” and that “Black characters aren’t marketable.” Octavia Butler and Nnedi Okorafor have even experienced the covers of their books being whitewashed in the name of “marketability.”

Which is why now, during this beautiful blossoming of Black stories and Black authors finally being given visibility, it seems especially in bad taste to see white or non-Black PoC authors suddenly writing books and debuting book covers that prominently feature Black characters.

It doesn’t feel appreciative—it feels appropriative. It doesn’t feel genuine—it feels exploitative. And furthermore, it unfortunately gives off the energy of taking advantage of what is actually very beautiful and long-overdue progress for selfish purposes, of hopping on this aforementioned “diversity trend train” to incorrectly market stories as Black written, and featuring Black characters.

Now they see so many of us doing well (paving our own way) it’s suddenly “marketable” 🙄 https://t.co/bDrkUu4uKJ

Though I personally have no inclination that Bowles himself had any malicious intent in the book cover that was chosen for The Blue-Spangled Blue, the conversation that was opened up by this snafu remains incredibly important, in many ways now more than ever.

And when it comes to the criticism surrounding Kristen O’Neal’s book, the conversation cannot be had without acknowledging #OwnVoices, and why it was created in the first place. Coined by writer Corinne Duyvis in 2015, #OwnVoices refers to “an author from a marginalized or under-represented group writing about their own experiences/from their own perspective, rather than someone from an outside perspective writing as a character from an underrepresented group.” (Quote credit: Seattle Public Library)

Now, onto the other question: Why was #OwnVoices created? For years in publishing, marginalized groups have dealt with their perspectives and stories being compartmentalized into gross generalizations, stereotypes, and inauthentic portrayals. Worse yet, this has often been after struggling to find any representation of themselves at all.

Though in some cases a non-marginalized author may have good intentions for writing a diverse perspective they aren’t a part of, often times, there are dimensions and facets to that experience that cannot be properly executed from an outsider’s perspective—at least, not without (at the bare minimum, mind you) intense amounts of research and feedback from people of those identities and experiences.

Which, unfortunately, many authors don’t put forth the effort in doing.

Kayla Whaley from Brightly wrote an #OwnVoices article a few years ago that also had powerful insights on this topic. Here is one of my favorite points that she made:

Time and again, marginalized people have seen their stories taken from them, misused, and published as authentic, while marginalized authors have had to jump hurdle after hurdle to be published themselves. Many feel they must fight to receive even a fraction of the pay, promotion, and praise that outsiders get for writing diverse characters’ stories, and that’s when they’re allowed in the door at all.

The most prevalent criticism I see surrounding diverse books written from non-marginalized perspectives is how offensive they end up becoming—whether or not they intend to be so. Some books have been criticized as being inherently racist, others as insensitive and -phobic towards certain identities, and still others as carrying white savior sentiments or perpetuating stereotypes that only continue harmful misconceptions towards a group of people.

And that begs the question: Who really ends up benefiting from these stories?

Certainly not the readers, and certainly not the marginalized authors who have had to fight their way to the table, only to continue to deal with these harmful microaggressions.

This situation also brings to mind Barnes and Noble’s 2020 Black History Month “Diverse Editions” controversy. For some ill-conceived reason, it was decided that classic book covers would be released with revamped “diversity” covers that displayed many familiar literary characters as people of color, and other identities.

they gave frankenstein’s monster a natural fade and said let’s get it, diversity is on the way https://t.co/8fjUwEKct7

For obvious reasons, this majorly backfired.

What needs to be understood that is that when people speak of diversity, they are not asking for performative activism. Having a book cover that features a Black or Brown character means nothing if that character isn’t even Black or Brown—or worse, isn’t even in the book in the first place. When people speak of diverse stories, they do not mean that diversity should be exploited as the “hot new trendy thing” that sells, and co-opted by writers who are not of that identity and not willing to do their due diligence to ensure authentic and proper representation.

It really should not be that hard. But unfortunately, as has been proven in several instances, there is an almost willingness to be obtuse and miss the mark when it comes to this issue. Authors of color still find themselves struggling through barriers of accessibility when navigating the industry. They still find themselves dealing with microaggressions and lack of respect, as was seen in the case of a recent Publisher’s Weekly article detailing the fallout surrounding book agent Brooks Sherman.

Though criticism was swift and Publisher’s Weekly was quick to edit their article in apology, this example is only one of many problems that remain prevalent in publishing—and further exacerbated by things like “race-fishing” book covers and speaking over marginalized voices in storytelling. There cannot be the expectation of a fair and equitable environment for success when actions display something entirely different.

There has to be authentic intention and well-guided introspection when it comes to advocating for diversity and fairness in storytelling. Now that these stories are getting their due accolades, it does not mean hopping on the coattails and falsely advertising stories as “diverse” for the sake of marketability. Or creating misleading covers with Black characters on them in the hopes that they’ll sell better now that it’s “en vogue.”

All we want is stories that genuinely reflect the beautiful diversity of our own world. And it is up to everyone to ensure that the way we’re going about it is respectful, genuine, and beneficial for everyone involved.