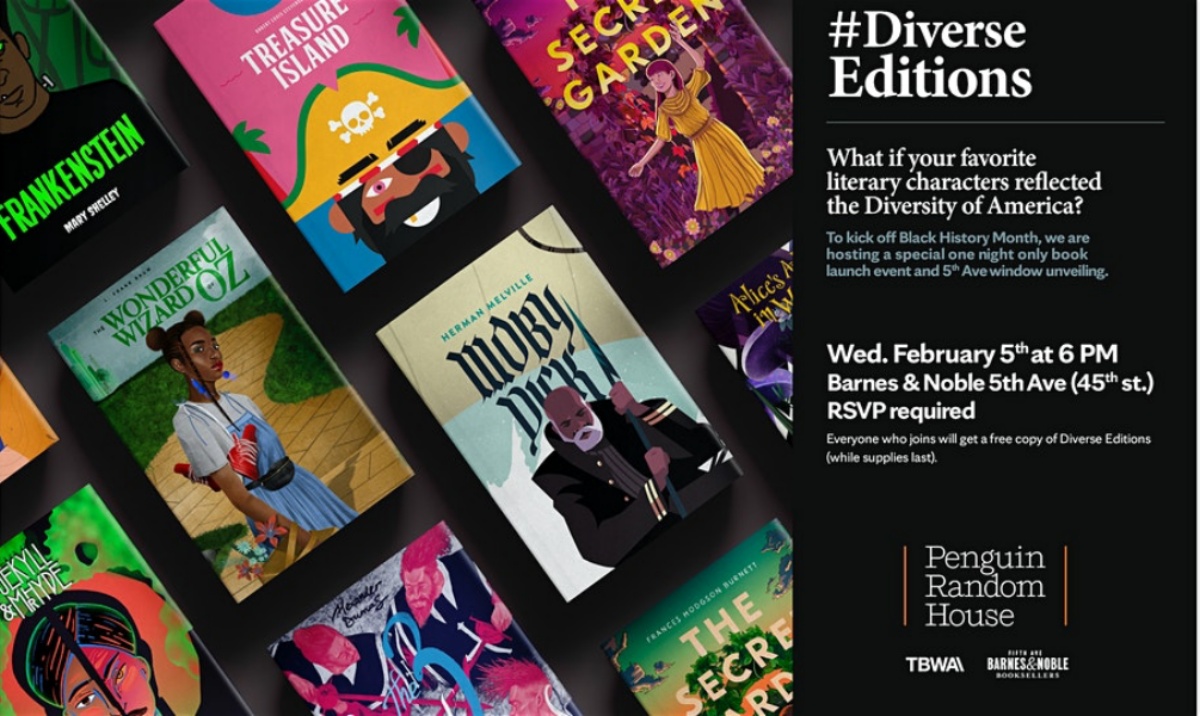 When trying to be inclusive just ends up making you look foolish: a Black History Month tale. A story came out from AM New York that Penguin Random House and Barnes & Noble Fifth Avenue, to “kick-off” of Black History month, were partnering up “to give twelve classic young adult novels new covers, known as ‘Diverse Editions.'” Oh god.

The tiles that got this “diverse edition” treatment are:

So, there are multiple problems with this whole situation. First of all, only one of the authors in this bunch is actually someone of African ancestry, and that’s Alexandre Dumas. Secondly, some of these books have racist or imperialist language in them (Moby Dick, The Secret Garden, and Peter Pan specifically), thirdly, the covers are not even reflecting Black people to celebrate Black History Month, and finally, it’s Black History month, so why not just  … I don’t know, promote classic and contemporary Black authors!

It’s so frustrating that this push for diversity is just basically pulling a few well-known titles from the stacks with no copyright issues and just patting themselves on the back. There are so many amazing titles by Black authors that people could have been exposed to—Clotel, Iola Leroy, Their Eyes Were Watching God, The Color Purple, Passing, Sister Outsider, etc.—but no. Diverse covers of Emma by Jane Austen, that’s how we’re going to celebrate Black History Month!

What’s worse is that according to Elizabeth Minkel, the co-host of Fansplaning, they use an AI algorithm to figure out which titles has a racially ambiguous protagonist and “whether or not the protagonist was explicitly described as white, and if they weren’t, they went to town!”

What’s not mentioned in here, though highlighted in the press release I received, is how they picked these titles: they used ~AI~ to scour a corpus of 100+ books to determine whether or not the protagonist was explicitly described as white, and if they weren’t, they went to town! https://t.co/RgpSdB54B9

I keep coming back to this & the decision to erase Black classic lit from a Black history month celebration. In New York. Where the Harlem Renaissance happened. Fun fact they could have rereleased a bunch of those books with new covers & gotten excellent sales & press. https://t.co/MTQERNHdeI

Erasing Black people and just using our month of celebration to celebrate “people of color” is the kind of capitalistic nonsense that happens every month dedicated to a marginalized group. Zero people of color benefit from this. Only a single mixed-race Black man is celebrated in this, and none of these books explicitly have a protagonist that is Black or non-white. There is enough diversity to celebrate within Blackness and Black identity, but that would require an event being created that’s actually interested in celebrating Blackness and not just capitalizing on “diversity.”

The event has now been cancelled.

The Diverse Editions event at our @BNFifthAvenue location originally scheduled for this evening has been cancelled. Please see our statement: pic.twitter.com/jGquff9MyM