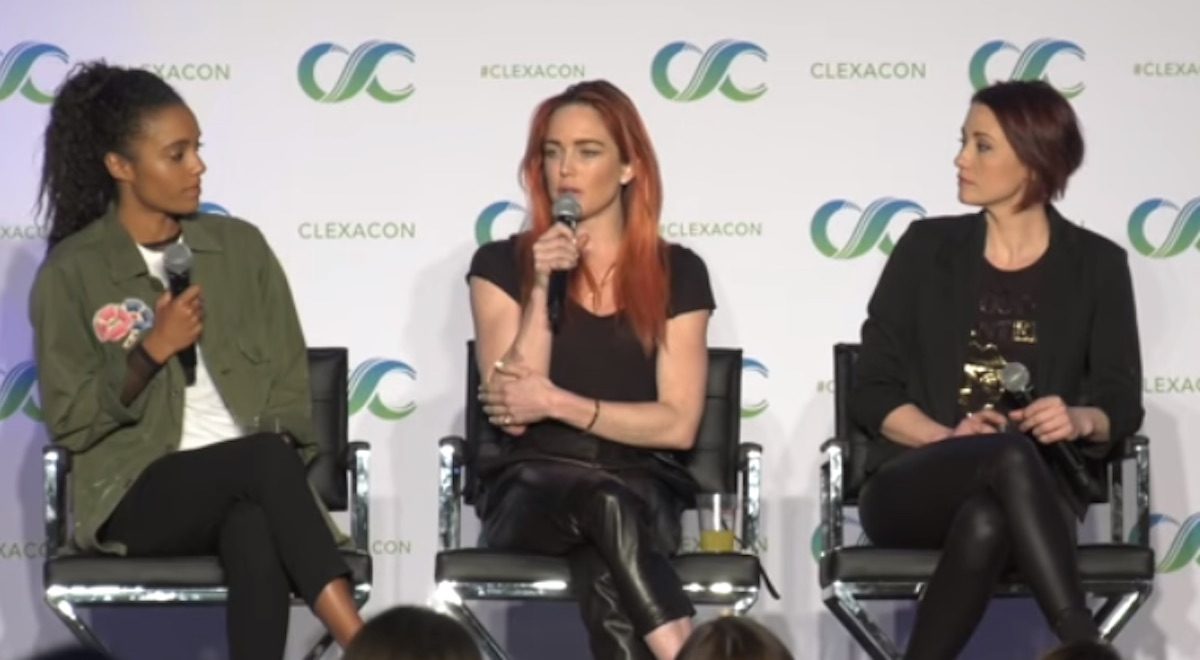 “It’s all about stories,” said Chyler Leigh at the final panel of ClexaCon on Sunday, April 8th. If there’s one phrase that can sum up the impact of the myriad queer women and characters that were celebrated at the three-day con in Las Vegas, that’s it. ClexaCon was both a celebration of wonderful shows, creators, ships, and characters, and a reminder of the impact these stories have on their audiences. This was perhaps no more evident than in the presence of the queer women of the DC TV (or the “Arrowverse”) throughout the event. These women, and the actresses who portray them, are heroines not only for fighting bad guys, but also because they are beautiful examples of positive queer representation.

ClexaCon was founded in response to the death of a beloved CW character, Lexa, on The 100, a topic that still brought out anger and disappointment in attendees. The con is a rallying cry that LGBTQIA fans deserve more and better representation. It is perhaps ironic, or a redemption arc worthy of its own show, that the most represented network at ClexaCon, in terms of currently airing shows, was The CW—specifically the Arrowverse, which accounted for four panels over the weekend. When you look at DC TV, it’s not surprising; every show has a queer character of some kind, and queer women have an incredible presence.

The newest member of the DC TV queer family is Nafessa Williams, better known as Thunder, or Anissa Pierce, on the CW’s latest breakout superhero story, Black Lightning. Playing the first black, lesbian superhero might be a daunting task, but it’s something that Williams was excited to take on. “Representation matters, and I’m just really honored to breathe life into her,” Williams said in her panel. That phrase was repeated again and again throughout the convention: representation matters. It matters, as Williams noted, to young black and queer youth who may have never seen a character like them on television before, especially as a hero. It matters to the audiences who lined up for hours and packed panel rooms to see Williams and her fellow actresses. Stephanie Beatriz, an out woman of color who appeared at the con to discuss bisexual representation, shared how important it was to her, as a bisexual woman, to hear the word simply spoken on her show, Brooklyn 99. It truly, truly matters.

For myself, the impact of representation and the power of story was most evident in the reception of another DC heroine: Chyler Leigh. Leigh entered her panel to a rapturous standing ovation and brought the audience (me included, full disclosure) to tears more than once by discussing how much of an impact Alex Danvers has had on queer fans. For those who have yet to catch up with Supergirl, Leigh plays Alex Danvers, the adoptive human sister of the titular girl of steel, Kara (Melissa Benoist). In season two, Alex met Maggie Sawyer (Floriana Lima) and, through that relationship, came to realize that she was gay.

It was a beautifully told coming out story, and one that has affected many people. Leigh is deeply aware of that fact. When the story was revealed to her by the writers and Arroweverse kingpin Greg Berlanti, an out gay man, Berlanti shared with her that he knew the story would have an impact. Even so, Leigh was not prepared. She spoke lovingly and reverently of the many fans who have reached out to her to share how Alex’s coming out helped them come out and come to terms with their sexuality. Especially because Alex discovered her sexuality later in life, the impact has been huge. Having an actress like Leigh, who so clearly cares for her character and deeply respects what Alex means to fans, is inspiring in itself but is also a testament to the network, studio, producers and writers who understand the power of stories. Leigh shared that playing Alex is one of the most important things she’s ever done, and she wasn’t the only DC lady to understand the importance of her role.

Caity Lotz, who plays the Arrowverse’s original bisexual badass, Sara Lance on Legends of Tomorrow, also spoke about how playing Sara has been the most meaningful job in her career. She shared the stage with Maisie Richardson-Sellers, an out queer actress who plays Vixen on Legends. Both spoke about the importance of characters like Sara and representation across the board in the DC TV universe. Richardson-Sellers noted that this focus on inclusion is a two-way street. It’s “the most supportive fandom … I think the writers see that and want to reflect it on the show as well,” she said, adding, “I’m so proud to be a part of it.” Not just the writers, but Greg Berlanti, the CW, and Warner Bros., which produces the Arrowverse shows, are focused on these issues. Richardson-Sellers shared that she has been working with Warner Bros. and the LA LGBT youth center on projects behind the scenes. Briana Venskus, who plays agent Vasquez on Supergirl, agreed. She told The Mary Sue, “I think it really does come from the top down.”

The importance of these stories, of getting them out there into the world in so many ways, was emphasized throughout the con. Writers and producers like Emily Andras held workshops to give creators practical information on how to succeed and get their voices out there. Panels of queer television writers (including a DC/CW show with Riverdale’s Britta Lundin), independent films, and queer-focused media platforms like Tello TV were spotlighted. The final panel of the weekend included three DC women, Leigh, Lotz and Richardson-Sellers, taking the stage again to discuss their own initiative to empower and support women: Shethority.

Shethority was born from the friendships between many women of the Arrowverse who have had the opportunity to connect across shows during the annual crossover event. Lotz and The Flash’s Candice Patton (Iris West) brainstormed the idea over a lunch. Since then, the campaign has gained steam, creating original content and interview videos, and fundraising with apparel through Represent. That’s just the beginning for this project. In a few months, the Shethority super team hope to launch a website to provide a platform for women to help other women by sharing their stories. The idea that women can learn, lean on, and grow from each other, while amplifying diverse female voices is a powerful one, echoing the spirit of ClexaCon.

In the two years since Lexa was taken from fans, a lot has changed. We have a new administration in Washington that is actively hostile toward the queer community. At the same time, creators and fans have mobilized in amazing ways to change not just the landscape of media, but the world. The work is just beginning, but ClexaCon’s success, and the love for and impact of these diverse female characters, give us hope. Leigh said of her character that “you don’t have to be super to be a hero.” This is true for all of us, fans and creators alike. If we tell and support these stories, things will change. They have already begun to change. “The stories we have are incredibly important,” as Leigh said. Here’s to all the heroes, onscreen and off, who help us tell them.