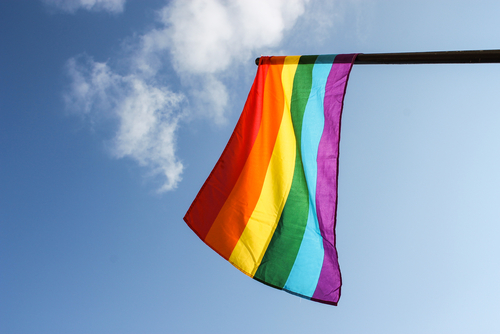 A hashtag like #QueerSelfLove would be relevant any week, but it feels especially vital now. The Orlando attack this weekend in which 49 people were murdered during Latinx night at a gay club served as a reminder to many of how fraught simply existing outside of a cishet identity can be, especially if you’re a person of color. Even in queer-friendly cities, even in 2016, queer people’s most personal moments can still be policed, our safest spaces still vulnerable to attack.

The Orlando attack was exceptional in its brutality and scale, but not in the hatred it expressed—it may not have even been the first act of terror directed at the LGBTQIA community that week. The past few months have also indicated just how systemic and widespread fear of the LGBTQIA community, particularly the trans community, still is in America.

In other words, it’s a particularly heartbreaking, infuriating, and triggering time for queer people, and it can be hard not to internalize all of the hatred expressed towards us. If you’re a queer person with a predominantly straight circle of friends or community, it can also be hard not to feel immensely alone right now. That’s something I personally experienced this week. As a bi woman in a monogamous relationship with a man, I felt as if I wasn’t fully entitled to sharing the grief of the ‘real’ queer community (here’s a great post to read if you’re dealing with similar doubts).

If you’re feeling similarly alone and isolated, I absolutely recommended checking out the #queerselflove hashtag on Twitter. Started by Dylan Marron, whose work we’ve written about on The Mary Sue before, #queerselflove is a heartening reminder of how diverse the LGBTQIA community is, and that, no matter how you identify, you aren’t alone in your queerness.

I am a soft-spoken brown queer man who wears his mother’s pearl earrings. And I love my queerness. Let’s start a #queerselflove hashtag

The response Marron received was staggering. Speaking to The Mary Sue over email, Marron explained what inspired him to start this push for proclamations of queer self love:

“People are taught to hate queerness and many queer folk have been taught to hate themselves. It is a dangerous and destructive pattern that feeds itself like a vicious cycle. As a queer man of color I am too well acquainted with the harassment I get simply for existing. The taunts of high school bullies don’t disappear, they just transform into sidewalk threats, media talking points, and sometimes even laws. My husband and I no longer hold hands in public because the threat to our safety became too great. Yes, even holding hands with your spouse can even be a dangerous act. There is an undercurrent of homophobia, transphobia, and femmephobia that is almost intrinsic to our society. I was rocked by the Orlando massacre where we lost so many of our queer siblings, mostly queer people of color, people who looked just like me, who dared to love themselves and each other out loud in a world that told them not to. They can no longer speak for themselves, so I figured that to honor them we should love ourselves out loud, fully and unapologetically.”

Loving ourselves “out loud, fully and unapologetically” is sometimes a tough order, but acts of solidarity and celebration like #queerselflove can certainly help make it a little easier.