How Musical The Prom, The Owl House, and She-Ra Are Reinventing an Age-Old Heterosexual Tradition In October 2018, a musical titled The Prom made its Broadway debut at the Longacre Theatre in Manhattan, New York. As per the show’s eponymous title, the musical centers around a young teenage lesbian from Indiana named Emma, who is denied access to her school’s prom after wishing to bring her girlfriend as her date, and the simultaneously well-meaning and fumbling efforts of Broadway stars/hacks attempting to get her to the prom.

A campy and heartfelt tale, the show features the usual song-and-dance familiar to Broadway while breaking new ground everywhere else. On Thursday, November 22, 2018, The Prom broke the internet, premiering the first LGBTQ+ kiss in the history of the Thanksgiving Day Parade (and you’ll be able to catch the whole thing yourself on Netflix later this year, with a star-studded Ryan Murphy adaptation). Honestly, it was because of this very kiss that I attended the show myself, and I was blown away by its incredible music and touching storyline that validated my own and many other people’s queer identity. Since then, I’ve only noticed more cases of queer proms within the media.

In 2018, when DreamWorks’ & Netflix’s She-Ra and the Princesses of Power came out, a legion of queer fans, myself included, felt our jaws collectively drop during the iconic eighth episode of the first season. The episode, titled “Princess Prom,” showcased the show’s titular protagonist, Adora, engaging in a slow dance with antagonist/love interest Catra (who, might I add, was dressed in the most amazing butch cosplay-worthy outfit ever) before crossing into a heated dip. Even within the early shipping history of She-Ra, with the Catradora ship not yet confirmed, there was no subtlety whatsoever, in that scene, as to the queerness of the show and those characters. 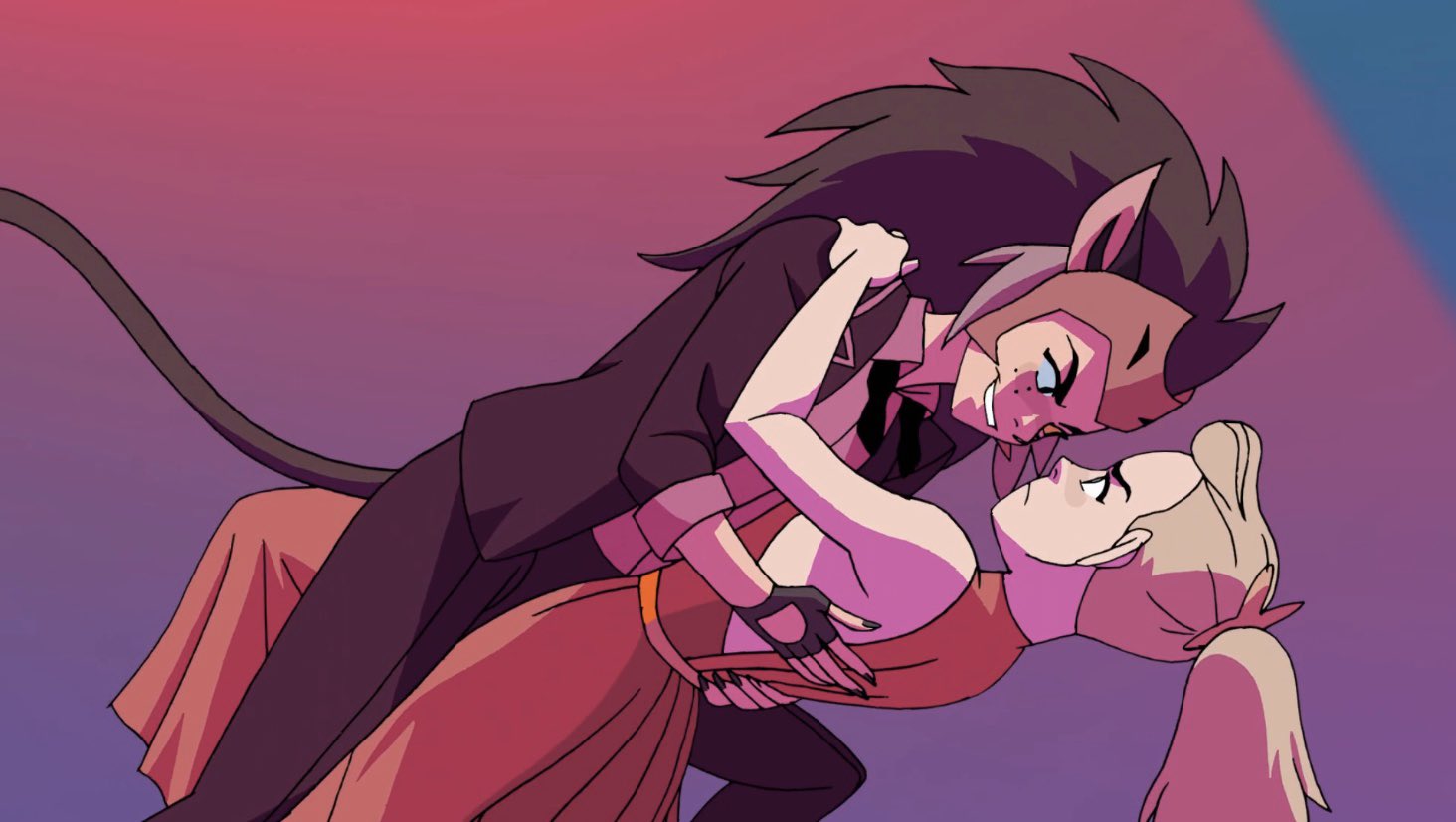 Two years later, the queer cartoon community got another shock to the system with the premier of The Owl House’s episode “Enchanting Grom Fright.” Having been hyped previously by online screenshots from the animation crew depicting protagonist Luz Noceda and classmate/former rival Amity Blight wearing formal attire, fans of the show were not prepared when the actual episode premiered, with the two engaging in a dance sequence echoing the likes of “Princess Prom” before confirming the latter’s crush on the other girl. The creator and executive producer of the show, Dana Terrance, later confirmed on Twitter that the main character is queer herself, making Luz Disney’s first bisexual lead. All this, of course, is amazing not just in terms of the amazing storylines and enjoyable shipping material, but in the way these narratives are reinventing old traditions.

For decades, prom has been defined as the quintessential high school experience. Short for promenade dance, prom originally started as a black-tie function heavily influenced by debutante balls, in which young people (specifically young women) were expected to debut their entry into formal society and “come out” (ha!) to their peers. Hollywood’s obsession with prom has been well-documented in classics such as Pretty in Pink, Never Been Kissed, and Carrie, highlighting and even augmenting the Western world’s fixation with this teenage affair.

Yet the event has not gone without its due criticism. Media outlets such as Teen Vogue have highlighted prom’s problematic history, showcasing the various issues—e.g. classism, sexism, racism, etc.—that attest to why prom has not historically felt accessible to all. In cases of several school districts across America, various students have been turned away from prom for not adhering to strict gender dress codes (e.g. girls wearing suits instead of dresses) and for bringing same-sex partners, including Constance McMillen, whose case inspired the musical The Prom.

For many in the LGBTQ+ community, we do not get the same traditional teenage blueprints as our straight counterparts. While straight people feel free to navigate their budding sexual and romantic feelings in expected age brackets, guided by media narratives that affirm their experiences, queer people coming out later in life often do not get these transformative events as a result of homophobia and transphobia.

However, with shows like The Prom, The Owl House, and She-Ra, we are finally getting younger queer representation. The emergence of LGBTQ+-based prom media means new generations can start to break down the old heteronormative traditions I and many others grew up with, and instead imagine a world where we get to wear whatever we want and dance with whomever we love.

contributorShe-Ra and the Princesses of PowerThe Owl House