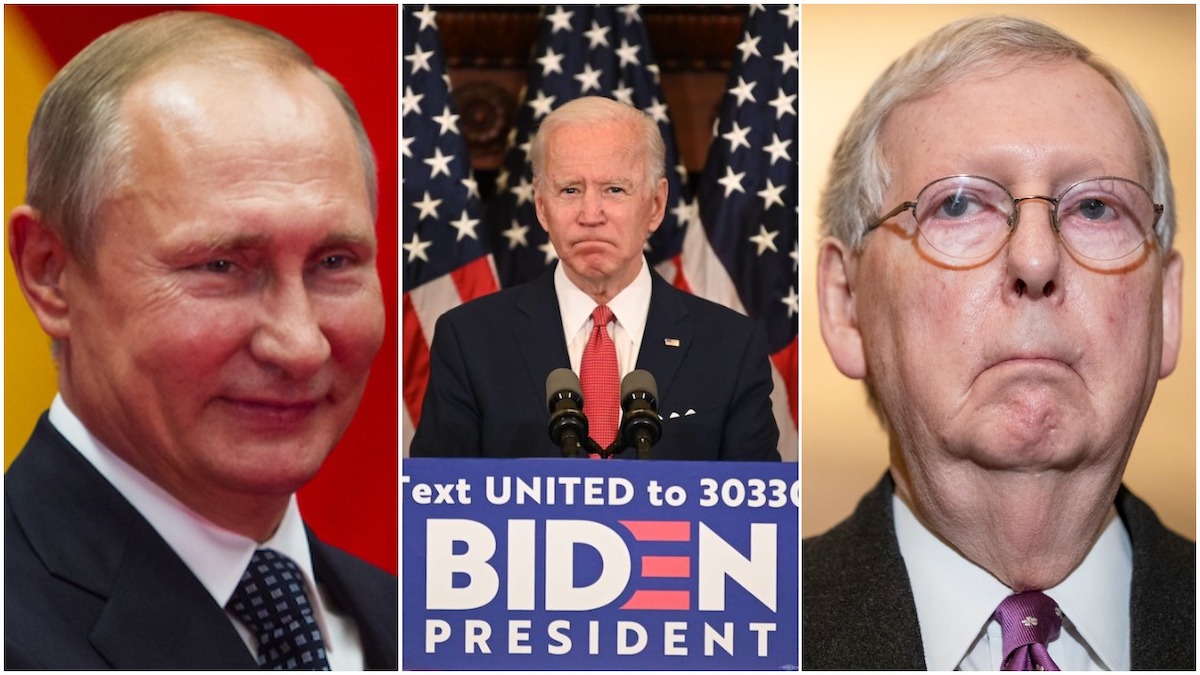 Just let that sink in a moment. Russian President Vladimir Putin—a man who’s held that office since 2012 and will probably never leave it, a man who has actively worked to undermine American democracy for years and delighted in the leverage he held over Donald Trump—that man congratulated Joe Biden on his presidential victory before U.S. Senate Majority Leader and zombie turtle Mitch McConnell.

Nothing Mitch McConnell does should surprise us anymore. Take, for example, his ongoing refusal of pandemic aid to millions of desperate Americans because his main concern is corporate “get out of jail free cards.” But “Putin and Russia acknowledge the U.S. election results before the leader of the Senate” isn’t the fun footnote in history that McConnell seems to think it is. This should be a huge story, but because it’s 2020, it’s a passing blip on our fiery doom horizon.

Snopes.com did a full investigation of the Putin and McConnell timelines after this tweet from MSNBC producer Kyle Griffin went viral:

Let us lay out the timeline. At 10:20 a.m. Moscow standard time, which is 2:20 a.m. Eastern Standard Time (EST) in the U.S., on Dec. 15, the Kremlin released a statement in which Putin congratulated Biden on winning the presidential race and wished him “every success.”

[…] Hours later, McConnell, a Republican, acknowledged the victory for Biden and Vice President-elect Kamala Harris for the first time in a prepared speech on the Senate floor.

Yes, Mitch McConnell was eight hours behind Russia and Putin in acknowledging Joe Biden’s democratically won election that’s been the accepted state of things for the rest of Earth and the Galactic Federation since early November. McConnell stayed mum on Biden’s win for more than a month while Trump sent his clown car of legal eagles all around the country, wasting everyone’s time with more than fifty failed lawsuits in an attempt to try and subvert the will of the voters and steal the election.

Putin also stayed quiet for a lot longer than most world leaders, who were quick to congratulate Biden shortly after it became clear on November 7th that Biden had more than enough electoral college votes to secure the presidency. But Russia is one of America’s greatest adversaries on the world stage. Putin’s allowed to not participate in that conversation if he wants to.

Mitch McConnell is one of the most powerful and visible politicians in America. His craven, cowardly silence while Trump tried to break democracy tells you everything you need to know about McConnell’s “legacy.” There’s no question that if Trump had found some sort of legal foothold (instead of his lawsuits being summarily dismissed by everyone on up to the Supreme Court), McConnell would have supported him over the actual votes of the American people.

Some online (like Dawson Leery’s dad, above) were quick to point out that maybe McConnell was even following Putin’s lead. After all, he didn’t earn the nickname “Moscow Mitch” for nothing. That came about from McConnell’s shady connections to efforts to lift Russian sanctions, and, oh yeah, after he and his Senate Republicans blocked the advancement of election security legislation in 2019, hours after Robert Mueller warned that Russians were interfering with America’s elections. Who wants to block legislation designed to keep America’s elections safer? Why, Mitch McConnell, of course! And now that we’ve seen his open contempt and disdain for the American electoral process, this makes even more sense.

“The Kentucky Republican is, arguably more than any other American, doing Russian President Vladimir Putin’s bidding,” Dana Milbank wrote in The Washington Post in July 2019. Why should Mitch stop now?

#MoscowMitch had to get approval from Boss Putin first. pic.twitter.com/4HdPfVEZGa

But anyway, PR-wise, when someone whose entire image is that he’s above democracy is publicly performing democracy better than you, it might be time to rethink staying in your shell for so long.

Here are some other things we saw today beyond the massive maw of Mitch McConnell’s hypocrisy: