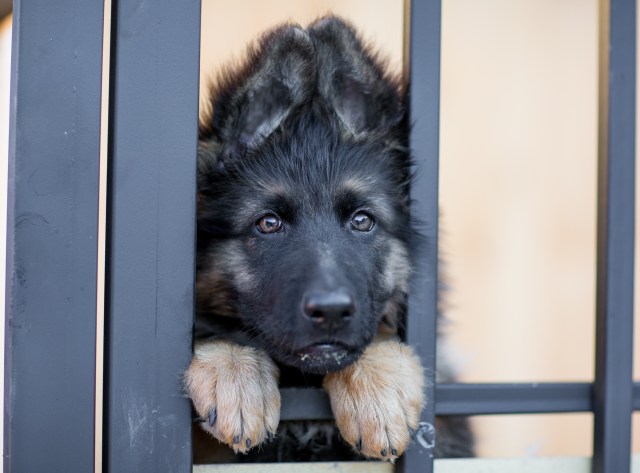 [Editor’s Note: By now, I’m sure many of you are celebrating the results of last night’s Hugo Awards! We’ll be publishing a roundup of this year’s winners soon, but in the meantime, here’s Marcy J. Cook on what the puppies stand for and the transphobia they demonstrated at this year’s Awards.]

If you are at all a Sci-Fi or Fantasy book-geek you know that the 2015 Hugo Awards were mired in controversy thanks to the actions of right wing conservatives, mostly older white guys. It’s a group that formed ‘Sad Puppies’ and it’s fraction spin-off the even more extreme ‘Rabid Puppies’. They aim to fight back against what they see as liberal bias in Sci-Fi and Fantasy towards women, LGBTQ and the mythic liberal agenda. Yes these are the terms the USA Republicans use too, this is because the puppies are mostly Americans so there is a lot of cross over in the rubric.

As the world has grown more progressive it has meant that the extreme-conservatives and white old guys have less control than they used to have. That is what this is about, a slight loosening of their grip. More women are winning awards, more PoC and people from the LGBTQ spectrum – in other words there is more acceptance of diversity. This has been reflected recently in the Hugo Awards, in particular women have been winning more Hugo Awards in the last few years. This is against everything that the puppies believe in.

Belief is the right term here, as the world the puppies yelp back to has never existed. They imagine a 1950’s era of white hetro male domination where all men-were-men and women existed only to be rescued, PoC knew their place and LGBTQ people didn’t even exist. This era in novels never existed of course, but why would mere facts stop the puppies? Reason certainly didn’t and neither did the concept of fairness.

The two puppy groups were not just trying to weight the Hugo Awards, or game it, they were out to break the Hugo’s. When the puppies gathered at Worldcon yesterday, the puppies were there to spread their particular brand of hate. Trigger warning for transphobia & abuse: 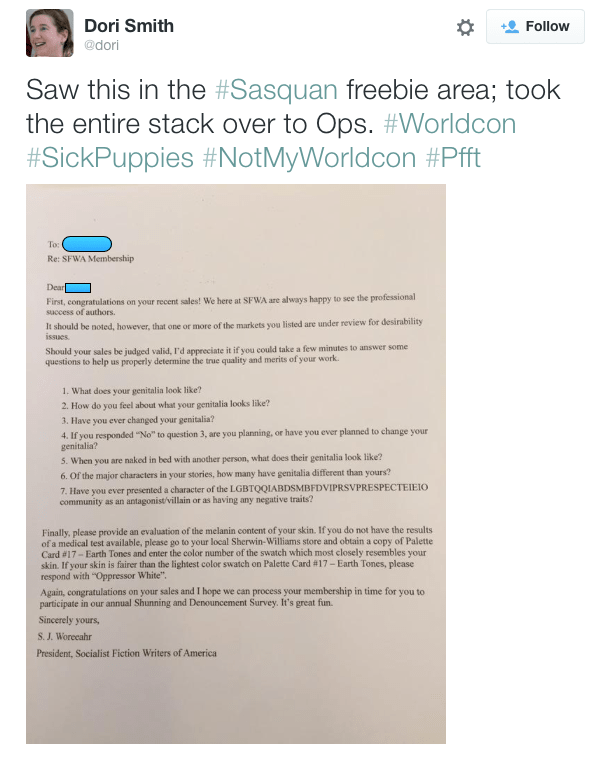 The slightly larger version is here, click to enlarge: 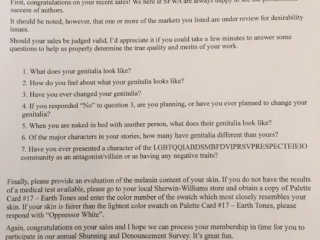 This was placed in a stack on the freebie table at Worldcon. I love Sci-Fi, I love fantasy, and I love reading and writing it ,too. What I don’t like is hatred. Puppies conflate free speech with the freedom to be abusive towards people they don’t agree with. It’s vile and the Hugo’s are going to struggle to recover from this. The puppies though don’t care about what the world thinks of the Hugo’s in the same manner as Trump’s wig doesn’t care about what it is riding on.

Just to prove that women can be as utterly transphobic as men, here’s how a puppy responded to the removal of the leaflets. She’s a writer I’ve never heard of, and I won’t give her publicity by using her name here; she uploaded more transphobic content and declared the leaflet “funny” and people opposed to ‘the freedom to abuse others’ as “devils”. 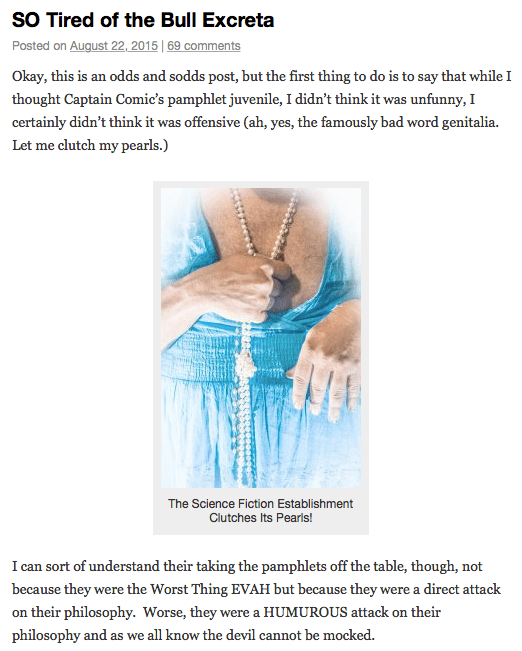 Thankfully the Hugo Award results backfired against the puppies and the hate speech they put out. The Hugos were watched more closely this year than ever before.