Women are too hard to market to.

Quelle surprise! The company that brought us 2012’s PS VITA “Touch Both Sides to Play” ad campaign featuring a four-breasted-lady has once again managed to insult both women and its teen boy target demographic in one sadly predictable swoop.

According to The Verge, Sony released the above video on its European PlayStation Youtube channel Friday night. The ad was pulled almost instantly (presumably because of complaints); this being the Internet, however, Sexy British Doctor has been preserved elsewhere for posterity.

Like UK tech company Asus, who deleted a similarly stereotypical advertisement earlier this year in response to complaints, Sony’s decision to remove the ad is heartening. Regardless, it’s worth asking how—especially during a year marked by unprecedented discussion of the harmful gender norms in games—ad agencies and the companies that employ them are consistently producing tone-deaf material that plays on offensive and problematic stereotypes.

Sure, the eventual reveal that “Dr. Grace Powell” is (gasp!) a gamer nods at inclusivity, but that’s not enough in an ad that clearly objectifies women in order to appeal to a young male demographic. As The Verge puts it, “The innuendo makes that clear, even if Sony subverts it.”

Considering the current gaming climate, it’s disappointing that no one looked at this ad and thought, “Nah. Now might not be the ideal time to release a commercial where a woman’s appeal to the male gaze is more important than, say, her actual interest in the product we’re selling. Let’s read the room, brosephs.”

Of course, considering the aforementioned four-breasted-lady, I shouldn’t be surprised at all: 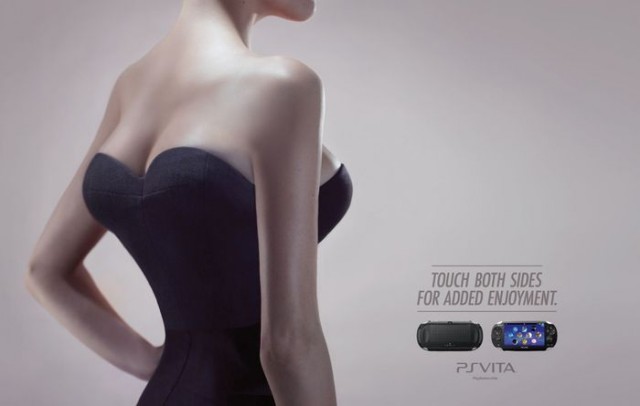 Previously in gaming and sexism