Sexist Ad on Polygon Causes Uproar—But Is It For The Right Reasons? 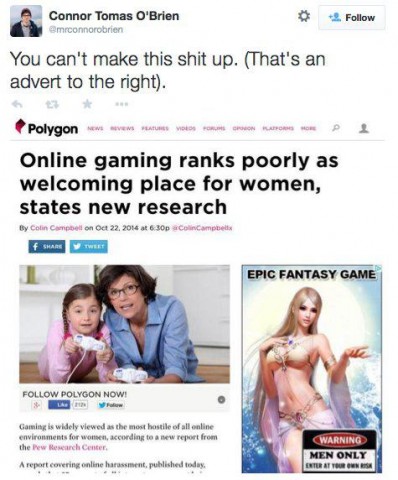 The following was originally posted on Dunlap’s blog under the title So Close, Yet So Far and has been republished with permission.

I saw this tweet earlier this morning. Whether or not it is legitimate, I do not know (which is all kinds of depressing unto itself), but what really bothered me were the responses.

To their credit, all I saw who replied were virtually shaking their heads, wagging their fingers, and Tweeting other types of disapproval. This is great! This is wonderful! Not long ago, that picture never would have risen to the level of Tweet-worthy, much less have dozens of people agreeing that it is unacceptable. The awkward sexism that marks almost every day for women who play video games is being picked up and identified by men! Men! They are beginning to see! The experience of over half the planet is no longer being dismissed out of hand. It’s being acknowledged, even validated. Strike up the hallelujah choir!

As I eagerly read the responses, a cold chill creeps from my toes to my brain. The responses, while more or less SMH-ing at the juxtaposition of a glorified sex object next to a mother-daughter dyad with “Online gaming ranks poorly as a welcoming place for women” emblazoned overhead, are troubling. The majority of comments direct their disapproval at Polygon, the site hosting the article mentioned above. It is quickly pointed out that it is an automatic ad, that an algorithm is responsible. Clearing Polygon of blame, the conversation quickly turns to discussion to the evil of automatic advertising. 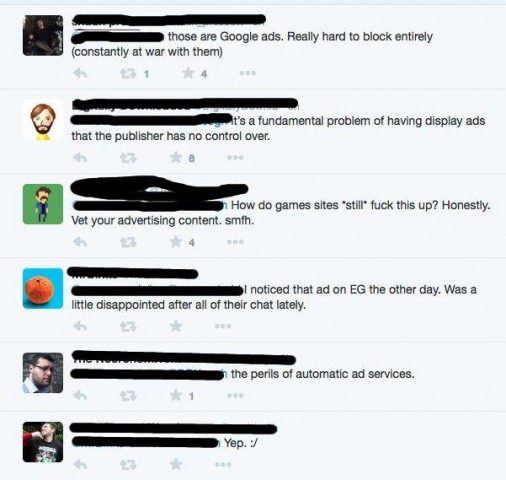 One Polygon reporter even posted: 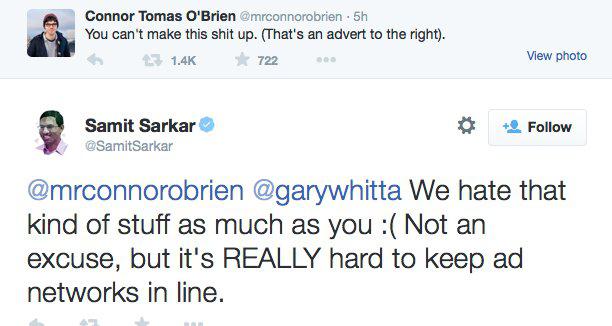 And I sit here, dumbfounded. Again, I want to emphasize that the very fact that this kind of event was recognized as inappropriate is a huge, momentous, sing-it-from-the-mountaintops kind of advancement (which again, makes me a little sad on the inside), and I thank everyone who has recognized it as such.

But the chills I feel tracing my spine and the squelching of my stomach come from the fact that no one condemned the company that made the graphic. No one spoke out against the gaming company that designed that character. It is a terrifying and sickening realization to think that the outrage comes not from a genuine disgust of the content, but how it was paired. If that ad had been placed next to a father and son with an article header about bonding, I doubt this would have arisen as a topic of discussion.

I suppose I should appreciate any support from my male counterparts, especially given the raucous vitriolic vomit of GamerGate. Maybe I should just be thankful for the ends and not worry about the means. It is a step in a direction away from the status quo, but it does necessarily feel like a step toward recognizing women as whole, human beings.

What happens to that same image paired with a father and son? Paired with a gaggle of teenage boys? While I see that as a problem, perhaps an even bigger problem than the above, many male peers do not see it as such. The feeling is one of “It’s okay to objectify women, just not when they’re around.”

For a history on the gender skew in gaming, Planet Money recently released a fantastic episode on the topic: #576 – When Women Stopped Coding.

Kelli N. Dunlap, Psy.D. (@KelliNDunlap is a dedicated psychologist and an avid gamer who believes that video games can have a positive impact on the world and improve the quality of life of all those who play. You can read more of her writing on her blog.