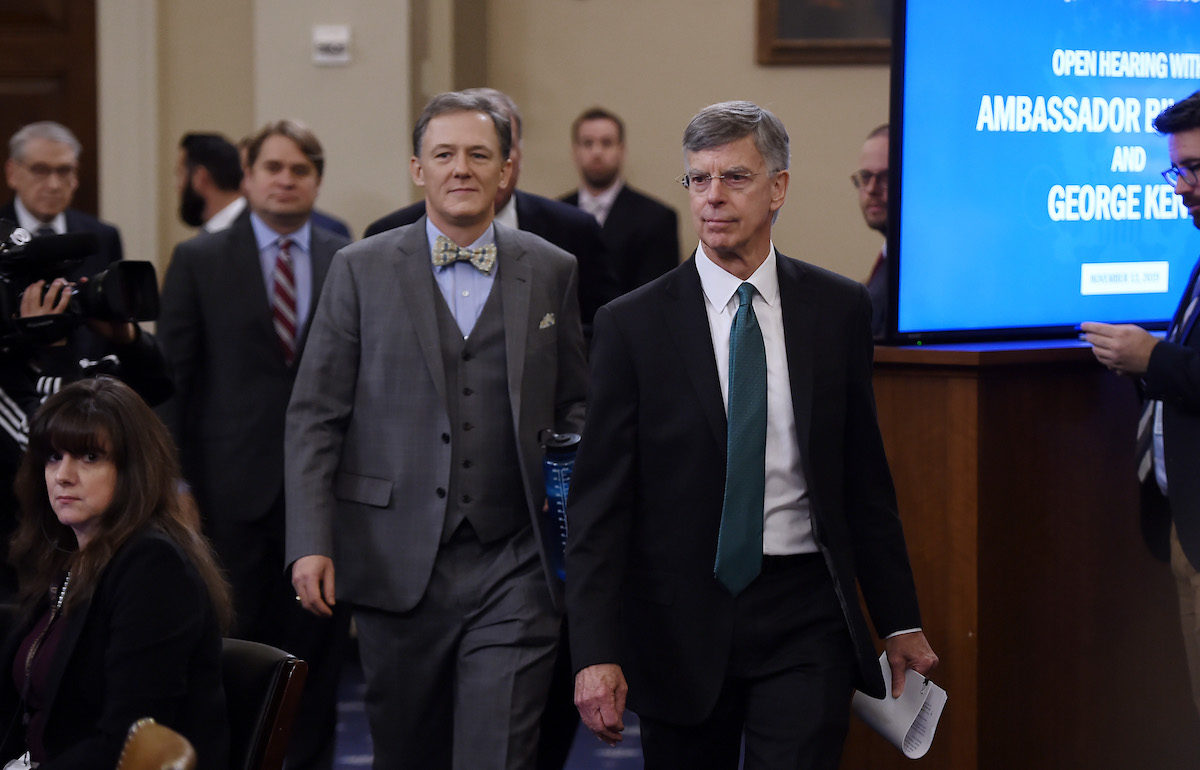 Today is the first day of the public impeachment hearing and it’s off to a really compelling start. It’s not exactly entertaining or riveting television because the people testifying in front of Congress are non-partisan career bureaucrats, not entertainers or the rabid “never Trumpers” that Republicans have tried to paint them as recently. But this is, without a doubt, an important day in our modern history.

You can watch it live here, but we’ll also give a rundown of what’s happened so far:

Rep. Adam Schiff, the House Intelligence Committee Chairman, started off the day with an opening statement laying out the reasons why this impeachment inquiry is happening and he was interrupted by at least three different Republicans already fighting over each other to grandstand about wanting to subpoena the whistleblower and other witnesses.

The whistleblower isn’t important today, though–for a lot of reasons, but mostly because today’s hearing is not about one phone call. It’s much bigger than that.

Today’s witnesses are George Kent and Bill Taylor. Kent, who you’ll know by his trademark dapper bowtie, is the deputy assistant secretary in the State Department’s European and Eurasian Bureau. He testified in mid-October that the White House had removed its core team dealing with Ukraine foreign policy and replaced it with Rudy Giuliani and the “three amigos” of Rick Perry, George Sondland, and Kurt Volker. This new team, he said, was polluting Trump’s foreign policy with “a campaign of lies.”

As for Taylor, he’s the top American diplomat to Ukraine whose October testimony reportedly “prompted sighs and gasps” from members of Congress. He’s directly contradicted Trump’s repeated claim of “NO QUID PRO QUO” with a definite yes, quid pro quo.

In Kent’s opening statement today, he accused Giuliani of trying to “gin up politically motivated investigations” and that by August of this year, those investigations “were now infecting U.S. engagement with Ukraine, leveraging President Zelensky’s desire for a White House meeting.”

He also gave an impassioned defense of those who have come under fire of Giuliani and Trump’s “smear campaign.”

“It was unexpected, and most unfortunate however, to watch some Americans — including those who allied themselves with corrupt Ukrainians in pursuit of private agendas — launch attacks on dedicated public servants advancing U.S. interests in Ukraine,” said Kent. “In my opinion, those attacks undermined U.S. and Ukrainian national interests and damaged our critical bilateral relationship.”

You can watch that moment here:

Next up was Taylor, who added a new bit of information to his already shocking previous account:

This, from William Taylor’s prepared remarks, is new: pic.twitter.com/ZM4P2vknV6

Schiff asked him to clarify that he heard Sondland say that Trump cared more about the political investigations (meaning getting dirt on the Bidens) than about Ukraine in general and Taylor confirmed that that’s exactly what happened.

We’ll have more updates from the questioning portions later, but in the meantime, here’s how Fox News is covering the day:

you already know how this is gonna play out pic.twitter.com/Xv28fiaMJY

And over in the White House, Trump’s press secretary Stephanie Grisham insisted that Trump is “Not watching. He’s working,” while Trump himself continues to post tweets and retweets (17 so far since it’s started this morning) insulting the process and today’s hearing.

I don’t envy the person in charge of jingling a set of keys to distract Trump from tweeting all day. They should probably take turns and jingle in shifts. #ImpeachmentHearings