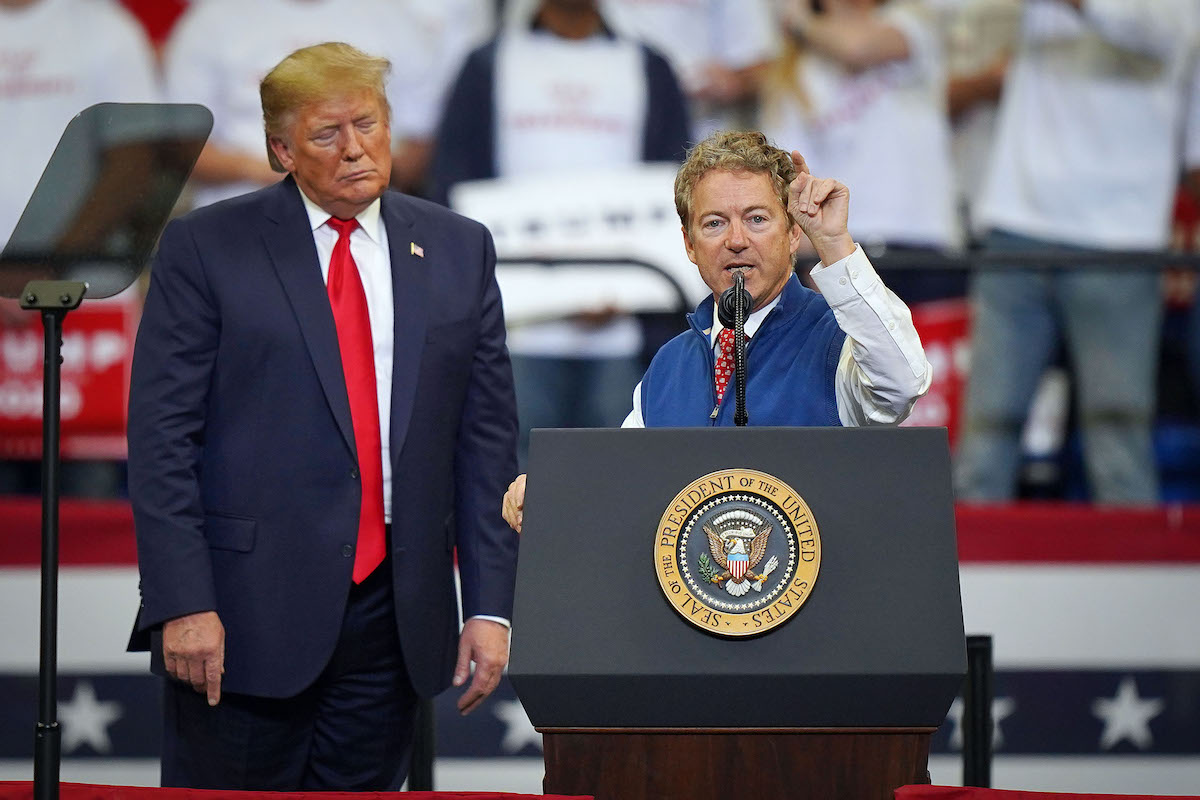 At a campaign rally in Kentucky Monday night, Donald Trump was joined onstage by Republican Senator Rand Paul, who was apparently eager to sell out everything he’s claimed to believe in, in exchange for some applause and a metaphorical Kiss From Daddy.

Here is Paul, telling the crowd that the whistleblower who filed a complaint about Trump’s call with Ukraine’s president should be outed by the media.

Here’s Rand Paul calling for the media to out the whistleblower at last night’s Trump rally in Kentucky pic.twitter.com/PxFLXb9boU

Until now, Paul had pretty much built his whole political career on the idea that the government should stay out of people’s lives. (Well, that and nepotism. Those are his big two foundations.) Paul is a Tea Party Republican who has described himself as a libertarian because, as he once put it, “libertarians believe in freedom in all aspects of your life – your economic life as well as your social life as well as your personal life.”

What makes this rally performance even more bizarre is that in 2014, Rand Paul fought to increase protections for whistleblowers, even introducing an amendment to a cybersecurity bill that would prohibit the exact sort of retaliation he’s now calling for.

I wonder if contemporary vindictive authoritarian Rand Paul remembers the past libertarian Rand Paul who can still be glimpsed on his own website. (https://t.co/kt15LrhrYY) pic.twitter.com/5rQNRxhKTg

I am seriously struggling to find consistency between the purported libertarian philosophy of Rand Paul and his desire to place a lawful whistleblower in harm’s way.

No one in Congress — and this is saying a lot — is a bigger phony that Rand Paul. Claims to care about nothing more than government interference in personal liberties, and then demands that the government get complete access to everyone’s personal information. https://t.co/HFKRHwWiMx

Not only did the whistleblower do nothing wrong or illegal, but the way in which Trump and his band of bootlickers continue to call for the identity of the whistleblower shows a fundamental misunderstanding of what whistleblowing actually is. Trump keeps casting doubt on what was said in their complaint simply because he and the public don’t know who the person is. How can we believe their account if they haven’t proven their credentials to us, he’s implying. How can we trust them?

The Whistleblower gave false information & dealt with corrupt politician Schiff. He must be brought forward to testify. Written answers not acceptable! Where is the 2nd Whistleblower? He disappeared after I released the transcript. Does he even exist? Where is the informant? Con!

CNN’s Chris Cillizza has a great breakdown of why this line of thinking is wrong, but here’s the big takeaway:

What Trump and Paul are trying to do is put the whistleblower at the end of this process. Unless the whistleblower reveals him or herself, how we can trust that anything he or she says is right? We have to know who this person is to judge whether they are some bitter Democrats or loser Never Trumper!

That’s not what a whistleblower is or what they do. Whistleblowers are the start of a process, not the end of it. And they are rarely the centerpiece of the process.

After the whistleblower filed their complaint, the investigation kept going. Trump is still stuck on step one, and has been ignoring the multiple witnesses brought in to testify to Congress about that call, other calls, and the overall state of US-Ukranian foreign policy.

“Fixating on the whistleblower in all of this, then, is missing the forest for the trees,” writes Cillizza.

There’s a chance that Trump genuinely doesn’t understand why it’s so pointless to focus on the whistleblower. I think it’s much more likely that he knows exactly what he’s doing–especially because it’s his go-to move: to repeat a talking point falsehood until his supporters treat it as fact. It creates a neat narrative that’s easy to parrot back and it deflects attention from the reality of the situation, which is that the process has been moving exactly as it’s supposed to and it’s not going Trump’s way.