Research Shows Pruney Fingers Are an Evolutionary Advantage, Still Gross to Look At 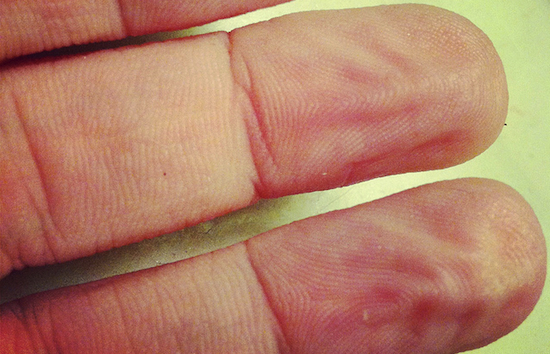 Among other things our pedantic mothers warned us about when playing around in a swimming pool, getting pruney fingers from staying in the water too long was one of them, as though having one’s fingertips resemble tiny geriatric faces was a terminal disease. It’s a common experience nearly every human being on the planet has shared and yet science has never quite determined the purpose of this wrinkly phenomenon — until now. Once thought to have been the swelling of the outer layers of skin caused from extended submersion, a research team from the Institute of Neuroscience at Newcastle University has discovered that pruney digits are an evolutionary response of the nervous system which allows us to get a grip on wet surfaces.

The research team had arrived at this conclusion by studying a group of volunteers willing to get their fingertips all pruney and gross for the sake of scientific discovery. After a select few of the subjects had their hands immersed in warm water for 30 minutes, they were asked to pick up wet marbles and lead fishing weights with their wrinkly fingers. Unlike the control group who didn’t take the plunge, those that had their fingers soaked were noted as being quicker and experienced less difficulty transferring the drenched objects into containers.

Tom Smulders, the research team leader, concluded that pruney fingers do in fact give one traction in wet conditions, comparing this to the function treads serve car tires. Nowadays, there really isn’t a need for wrinkled fingers — thanks to modern convenience — but in our evolutionary history, it was instrumental when gathering food from bodies of water or wet environments. Smulders said:

This would explain why it happens to both hands and feet, and might have been an adaptation in some primate ancestor well before humans evolved, who might have walked on all fours.

Going by this information, it’s funny to think that we now get pruney fingertips because of a bunch of prehistoric apes with a hankering for some fresh seafood. That’s what we get for having such discerning taste.

(via Phys.org, image via savanna-smiles)