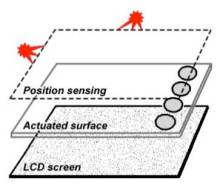 Some smartphone users have been been put-off by the low-friction feel of multitouch glass. Still others pine for the days of physical keyboards, and insist that buttons be a part of their user experience. These folks might be intrigued by new technology called “programmable friction” that will make touch screens feel as if they have physical objects etched on them.

The new screens would be similar to existing “haptic feedback” technology, which uses vibration to make the user feel a response to movements on the screen. The difference is that with programmable friction, the vibrations occur underneath the screen’s glass and at specific points and frequencies. As a finger moves over the screen, the vibrations increase or decrease, changing the friction underneath the user’s finger. Using this technique, researchers were able to create the sensation of actual movement by objects on the screen.

While the visceral feedback sensation is intriguing, the researchers reported in their findings that it has practical application as well. For instance, their study suggests that programmable friction makes the user more accurate in carrying out tasks on the device. The users in the trial study also reported that they didn’t need to rely on vision as much, being able to “predict” where their finger while scrolling for instance. Of course, others in the trial were less enthused, describing the experience as “creepy.”

The study claims that the technology behind programmable friction is already quite mature, and perhaps 2-3 years away from possible commercial implementation. It’s very easy to imagine that this could become a next generation smartphone, but it could be a hard sell to consumers that would probably have to feel it for themselves. After all, commercials can’t, thank goodness, make us feel the product their selling.

(I Programmer via Slashdot)