Pro-Trump Mobs Have Stormed the Capitol in Attempted Coup 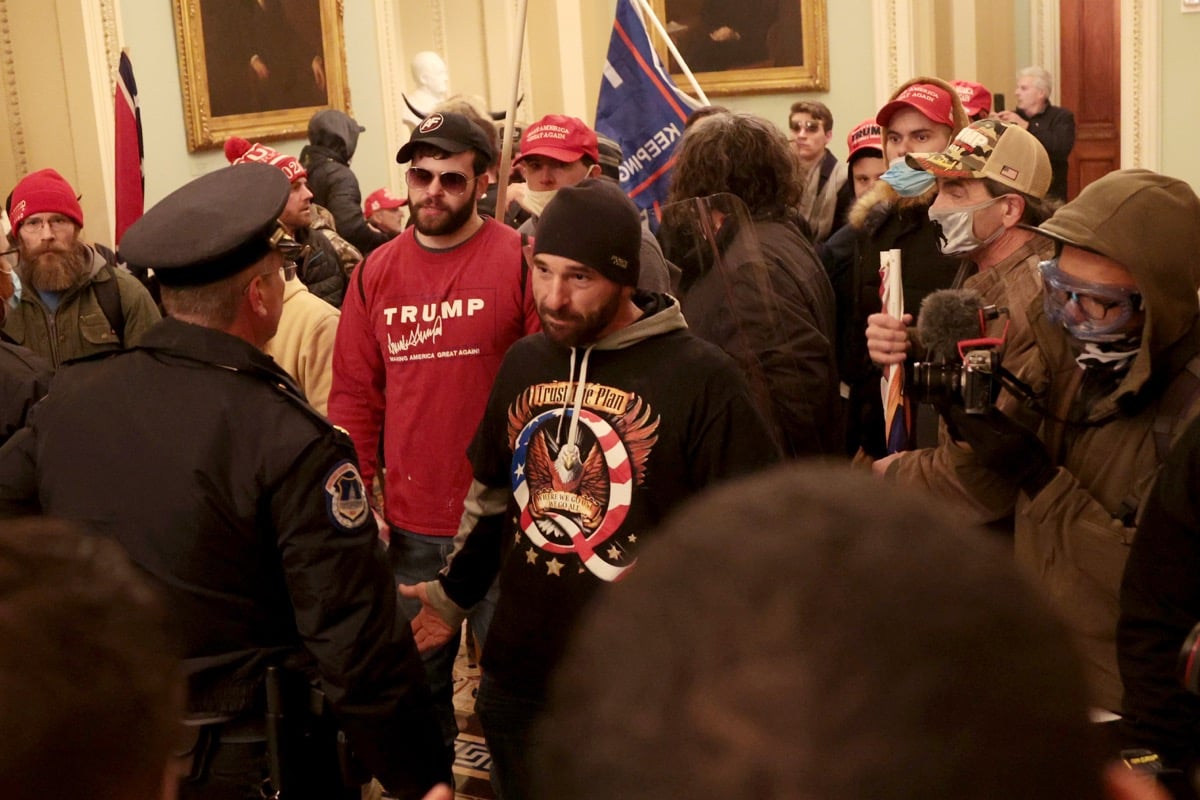 There’s no other word to use for what’s happening in Washington, D.C. right now. This is an attempt at a coup. Trumpist mobs, whipped up by the president’s fraudulent claims about the election, the complicit GOP, and nonstop conspiracy theories, have breached security at the Capitol building following clashes with the police.

This is a direct attack on democracy and the democratic process.

Video from the chamber. pic.twitter.com/UKF7MScHKN

This is not a protest. This is a coup. And these are violent, armed insurrectionists.

Video of Trump supporters breaking into the Capitol pic.twitter.com/imwGubWPEB

Shots have been fired (?) There’s no question this is an attempted coup. This is what happens in failed states. And it needs to be punished severely for a democracy to restore itself.

Domestic terrorists. All of them.

This is a sad day for America and for democracy. https://t.co/3CVNdiIbWh

God this detail from the Hill pool report breaks my heart — even as they were rushed from the Senate chamber by police, Senate parliamentary staff made sure to grab the boxes holding the electoral college certificates

That’s the confederate flag flying outside the Senate chamber pic.twitter.com/1XB5TlAsuv

This is a picture of people storming the capitol of the United States while carrying *a confederate flag.* pic.twitter.com/Mf8Zoo4hyB

I didn’t know something could be so terrifying and embarrassing at the same time pic.twitter.com/hx5Mm6GKUV

BREAKING: A source tells me The Defense Department has just denied a request by DC officials to deploy the National Guard to the US Capitol.

they’re not protesters. they’re terrorists. this is terrorism.

What I can’t get over is…how few people there are! Several hundred? A thousand. I mean it’s crazy capitol police was not better prepared for this.

During the four years of the Civil War, the confederates never got closer to Washington than Fort Stevens. Until today, when insurrectionist supporters of @realDonaldTrump paraded through the U.S. Capitol Building carrying the Confederate battle flag. pic.twitter.com/mPye0ziVlj

Donald J. Trump has ended America’s streak of a peaceful transfer of power. That’s it. That’s his legacy. He refused to concede, gathered a mob on the day Congress rightfully elected his successor, and then instructed that mob to march to the Capitol and raise hell.

When the Capitol is cleared and secured, and the joint session of Congress and the electoral vote count is completed, the House and the Senate should proceed immediately to the impeachment and removal of @realDonaldTrump.

The calls for Donald Trump to resign the presidency immediately should be universal at this point. He actively and publicly orchestrated mass sedition and he cannot continue in his office now.

Quick reminder of what people who peacefully protest often face in D.C.:

Four years ago I saw people on the Hill dragged out of their wheelchairs to be arrested for protesting outside of a hearing room.

I’m just having a really hard time reconciling what is currently going down in the Capitol with the many times I have personally witnessed disabled protesters demanding Congress not strip their health care be dragged out of hearing rooms, office building hallways etc.

Pay attention to — and never forget — the difference in police response between a white supremacist coup and protestors asking to not be killed in the streets.

Cops are taking selfies with the terrorists. pic.twitter.com/EjkQ83h1p2

Just to be completely clear today, pointed questions like “Where is the teargas?” or “Why don’t we see more choke slams?” are not demands for police brutality. They are rhetorical questions meant to highlight the fact that police *do* know how to avoid police brutality.

This is a developing story and we’ll update as more information becomes available.

Yes. I envisioned this four years ago. https://t.co/21TLCYBS27

In retrospect, “Kato Kaelin in a Donald Trump ski hat stealing a podium from the Capitol Building” was always how this presidency was going to end pic.twitter.com/SeSIMYatTL

I’ve seen better security at a Comic-Con than by some of the police in the Capitol. They’re just standing there.

This is an armed insurrection. https://t.co/jRNaMZpRsZ

The privilege on display for all to see is absolutely disgusting. https://t.co/fQLPMgeLXE

I believe the Republican members of Congress who have incited this domestic terror attack through their attempts to overturn the election must face consequences. They have broken their sacred Oath of Office.

I will be introducing a resolution calling for their expulsion. pic.twitter.com/JMTlQ4IfnR